Analysis: what Beale’s role tells us about the Wallabies 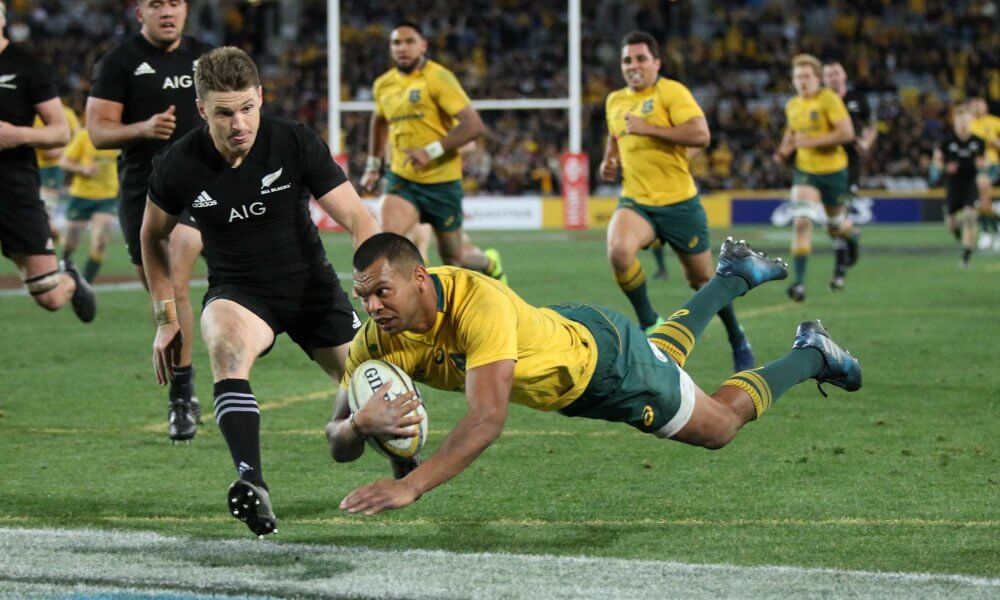 Analysis: what Beale’s role tells us about the Wallabies

Back in 2014 one of the key to the Waratahs Super Rugby Title was the Foley/Beale axis. In many ways it was a blueprint for the Wallabies assault on the world cup the following year, with Giteau slotting into the 2 playmaker instead of Beale.

Since the World cup it’s been clear that with first Giteau and then Beale being out of the equation the Wallabies have struggled to fill that position, and it’s been clear in how Foley has struggled at both Super Rugby and international level with an additional decision maker in the 12 position. Sure Chieka moving Foley to 12 with Cooper at 10 looked sound on Paper but apart from a few glimpses it never really yielded any sustainable success.

So it’s really no surprise that after his European adventure Beale has been parachuted straight back into a key position in the Cheika blueprint of a team. We all know Cheika watches European Rugby and he will have followed Beales form closely noting that during his time at Wasps Beale regularly was deployed at 12 or 15 in a back line that was packed with decision makers.

With Cipriani, Goppperth, Beale and Le Roux all around him the pressure was off for him to just play and it was hugely successful with Wasps making consecutive semi finals in the Premiership and the knockout stages in the European Champions Cup – Beale playing an instrumental part before missing out on the 2017 Premiership final due to injury.

As fantastic a 15 as he can be in truth I really like Beale as a 12. I don’t think he has the passing range to play 10 (hence his sideways running) and I don’t think he handles the pressure of being the key decision maker well. Yeah, it’s had some success here and there but at this level, you need to be able to stand up week in week out and deliver.

In contrast, 15 can be an isolated position and for a player like Beale who likes to spark it can be a frustrating position to play in. So for me 12, where he’s in the thick of it but not running it, is perfect and Beale’s stats from the Springboks test seem to show us how important he is in the Wallabies systems.

Two key stats that jump out for a playmaker/decision maker are passing and kicking:

That roughly is in keeping with the possession stats in that Australia had 57% of the possession. But let’s break that down a little bit more and look at the individual stat’s for the backline within that (grey denotes substitute): 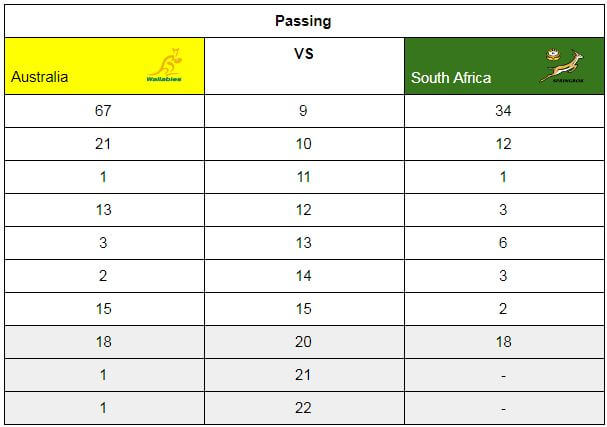 Obviously as one would expect that is heavily loaded to the halfbacks with Genia, Cronje, Foley, Jantjes, Phipps and Hougaard all putting the ball through their hands the most for their teams. But two numbers that jump out for me are Folau’s and Beale’s, especially in comparison to their opposite numbers and the opposition fly half.

A large chunk of Folau’s passing stats can be explained by the fact he fielded a fair amount of kicks in the wide channel often playing them in field to Beale (which links up with Beales kicking stats – more of which later).

In contrast to the Springboks, it shows how little ball the South African backs got in comparison to their Wallaby counterparts. But even so for a 12 to pass more than a 10 is, for me, an interesting stat. In fact if we exclude the halfbacks Beale passed almost as much as the entire South African backline combined: 13 vs 15. 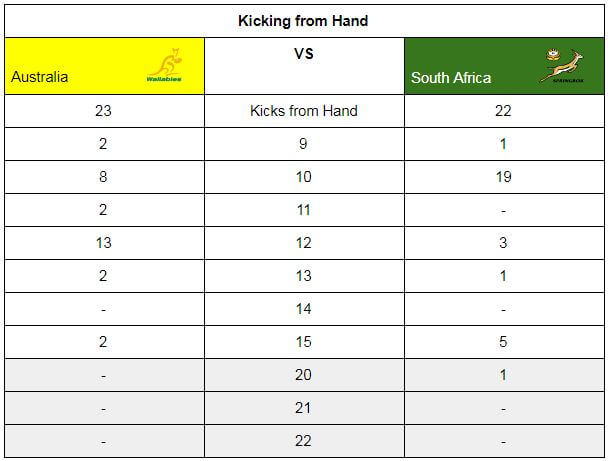 Again some of that is explained by his defensive positioning at 15, but overall the stats say Beale had 26 interactions on ball via kicking or passing, plus another 9 runs with the ball.

So whilst the numbers and the charts look good what does it actually tell us about how Beale played, about his impact on the game, about how effective he was?

The answer is very little, it just gives us an oversight of how involved he was but it doesn’t really tell us what he was doing or how effectively. To make some sense of how these stats equate to how he played we need to look at those interactions in isolation and map if they were positive or negative contributions. 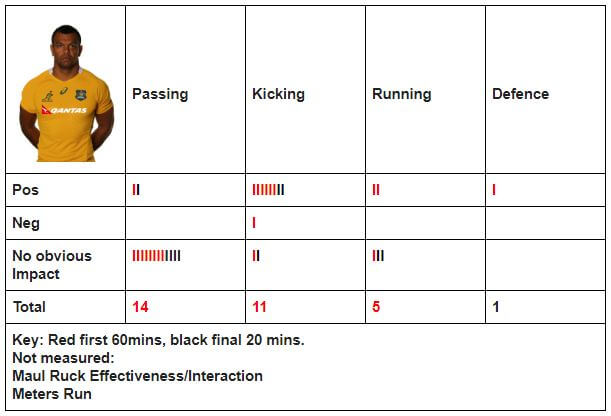 So by our coding of the game, Beale had 31 Interactions in total as opposed to ESPN/SANZAR who recorded 36 – that’s fine interpretation happens, but I think we get the general overview of Beale’s involvement and how effective it was. It’s worth noting that a stat such as “no obvious impact” shouldn’t be seen as a negative, that’s just him distributing to the next man out resulting in no obvious line break etc…

Negative kicks we’re judged on the outcome, did it give possession or territory away? For example, late in the game Beale fields a deep ball and kicks down town, Coetzee kicks long into the Australian 22 and Beale again fields the ball this time putting it in touch deep in SA territory. The first kick was measured as negative the second as positive.

So, Beale, he didn’t really do anything then?

We’ll no, not quite he certainly didn’t do anything substantially wrong, but if we look at Beale’s performance what’s interesting is his interactions went up during the final quarter of the game. A third of his interactions occurred in that final 15/20 minutes of the game. Meaning a third of his on ball stats came in the final quarter. Of course, not all of them were positive or had an impact but I think that flurry of activity in the final 15 minutes or so shows a level of leadership and wanting to take control of the game – which for me are genuinely positive contributions to the game but Australia lacked the fundamental stucture to allow him to do so.

So did Beale have a good or a bad game?

A question that’s not so easy to answer. He certainly scored a wonder try but outside of that he was just, well consistent and I think this highlights one of the fundamental failings in Australian Rugby right now. In that with such an overly complicated game plan in attack and defence players like Beale just aren’t being used in a manner that is optimal to their skill set.

By this I mean they are being asked to play a game that doesn’t really suit them.

So why all the Beale hating?

Well, the point isn’t to give KB a hard time, but highlight the failings in the Australian camp and how it’s letting the players down.

In reality we, all know Beale is at his best attacking the line squaring the defence, sitting them down and preserving space for the next wave of attack (or getting an offload away to runner off his shoulder). Where he’s not really of much use is distributing laterally which is a lot of what we saw and sitting back 30-40 metres waiting for a kick to return.

His brief is clearly to assist Foley and Folau, taking some of the responsibility away from them. The problem here is he is being used as a Second Bernard Foley. He’s hidden away on defensive duties (how can a 12 make only 1 tackle in an entire game).

Which in all is just a fancy way of saying the Australian game plan isn’t really working (or potentially doesn’t even seem to exist).

If we look over the previous few weeks have we genuinely seen a sharp upward curve in performance? I’d say not really. Sure they ran NZ close in NZ but many poor teams have done that over the years, it’s impressive what a hiding can do to get you up for the following weeks game, but for me there is an inherent lack of spark in the team.

But in reality we continue to see a defensive system that hides poor defenders out of harm’s way. We continue to see a forward pack that isn’t really dominating the gain line and we continue to see a relatively flat one-dimensional backline attack that continues to go edge to edge without really moving forward (which we will look at in more detail in a future piece), but overall we continue to see there is just something off with the Australian performance and players like Beale are paying the price.

Bringing the best out of players like Beale, Folau and Foley isn’t about just giving them options it’s about giving them a framework to exercise those options within. It’s all very well saying you want to play a certain type of game, and for players to express themselves but you need to give them the framework in which to do that and for a player of Beale’s attacking spark to return stats like above against what was frankly not a pretty average Springbok side you have to again question where the team see themselves going.

And somehow Cheika and co need to rediscover that something that made them all click a few years ago at present i’m not seeing anything that makes me think they will.

As such it will be interesting to see how the Wallabies back up another lacklustre performance and against a powerful Pumas pack. The advantage on paper is certainly in the Aussie backline, but the question is can they stop these lateral attack patterns, be direct then they can they sit the pumas drift defence down and preserve space for runners like Hodge and Folau, Rona and Speight if they do that they can I think they can tear Argentina a new one.

I’m just not sure they currently have the heart to do so.