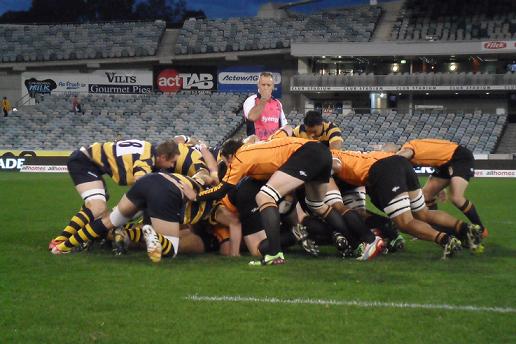 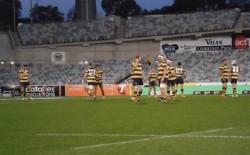 A Chris Cocca try after the full time siren gave the ACT Griffins a thrilling win over a tough NSW Country Cockatoos outfit 38-31 at Canberra Stadium on Friday night.

Poor execution, errors, and an inspired NSW Country defensive effort made life much harder for the Griffins in the annual fixture.

Griffins coach Craig Robberds praised the Cockatoos for their efforts, but despite the flaws the Griffins had, was very pleased they had the final sting in them.

“They were extremely tough, and tough at the breakdown. Their defence was pretty phenomenal,” he said.

“Full credit to them. They were very physical.”

Griffins vice-captain Sam Windsor said the pressure of losing was what lifted them at the end to win.

“We don’t like losing at home, and there’s a bit of a rivalry between ACT and Country, and like any team you pull on a jersey and show that you’re proud,” he said.

The men from the capital had taken the last two annual clashes, doing so in flawless fashion last year where they did not concede a single point.

The game was played as the curtain raiser to the ACT Brumbies round 16 home clash against the Wellington Hurricanes at Canberra Stadium.

It had been two years since the fixture was played at the Canberra’s home of Super Rugby, and was returned there to celebrate the 75th birthday of the ACT Rugby Union.

This would have been an exciting experience for NSW Country players, who are rarely exposed to professional venues.

Cockatoos coach Col Jeffs remained humble after the loss, and was not overly concerned.

“31-all would have been a fitting result considering the furiosity of the contest, but it is disappointing to go down there at the end,” he said.

As would be expected, the Tuggeranong Vikings featured heavily in the Griffins side, with seven players including monster prop Sione Taula, flying outside back Brenden Tuaeki,  try-scoring machine Rodney Iona, and the dangerous flanker Tim Cree.

Surprisingly, John I Dent Cup second runners Canberra Royals only had two players in the squad, with one of the competitions best ball players Pedro Rolando coming off the bench.

The Gungahlin Eagles were rewarded for their purple patch earlier in the John I Dent Cup with five representatives , including in-form centre Matt Hawke.

As per Griffins selection criteria, every other ACT Premier Division club was represented at least once. 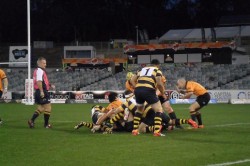 While the Griffins were first to score through Iona, it was the Cockatoos that dominated possession and field position early in the game, and got away to a seven point lead thanks to tries from Illawarra University teammates forward Paul Tuala and fullback Don Nepia.

Courtesy of Uni-Norths Owls half scrum half Eden Campbell-O’Brien, the Griffins turned momentum, pushing forward and getting good field position to gain a seven point advantage.

But after the half-time siren, the Cockatoos steam-rolled forward, catching the home side off guard, and levelled the half-time ledger through half Ben Greentree of Camden, which could have proved a vital moment in the match.

Both sides were just as even in the second half, and with the Cockatoos leading 26-24 with 25 minutes to go, it was anyone’s game.

The Griffins had most of the possession in the second half, but they found points hard to come by as the Cockatoos held strong in defence, while some poor execution also cost the Griffins.

Another crucial moment in the game occurred when Tuaeki made a line-break and had two unmarked men to his right, but failed to pass.

A loose ball was pounced on by Cockatoos winger El Sinoti of Avondale who raced away to score, seemingly sealing a result, but moments later Rolando finally got another try for his men which set up a grandstand finish with five minutes left.

With the scores level, Cocca secured the final result.

Robberds credited interchange back Mitch Connolly as having an outstanding game.