The ARU to set up Super Gymnastics competition 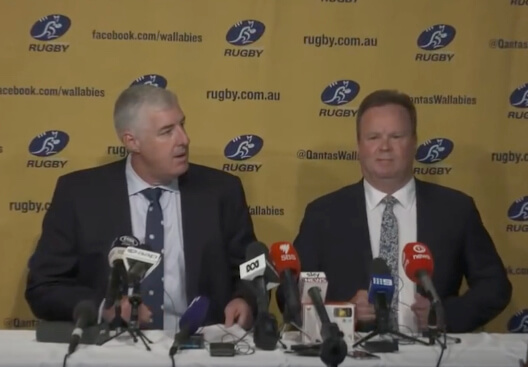 The ARU to set up Super Gymnastics competition

After enduring a difficult week, there is finally some positive news emanating from  ARU HQ with speculation the Australian Rugby Union is about to sign a lucrative deal to join a new Super Gymnastics competition. While the finer details of the competition are yet to be determined, Off White Card understands the interest in the new competition was prompted after some impressive gymnastics displays in recent weeks from senior ARU figures.

While not being drawn into specifics, an ARU spokesperson confirmed the existence of the plan and that it would be a subject of discussion at the next ARU Board meeting.

“It has been something that’s been tossed around a few times but it never really got much traction at the executive level. That is until this week when a few things really brought it into sharp focus. I guess what triggered it was the impressive backflips the ARU Chairman performed this week, they were right out of the top drawer.

“It was the equal of anything we saw during the Rio Olympics and would have scored high 9’s, even from a Russian judge. Funny thing is, no one on the Board knew ‘Patsy’ Clyne had this talent. They all knew he was a dodger and weaver, but his ability to perform multiple backflips in quick succession sealed the deal.”

It seems that Chairman Clyne isn’t the only ARU executive to have some hidden gymnastic talents with CEO Bill Pulver also displaying enough creative flair to warrant some cautious optimism the new competition will succeed.

“As equally impressive as Patsy’s backflips was the flexibility of Bill Pulver in tying himself in so many knots over the last month. That kind of flexibility and ability to twist and turn depending on a particular situation can’t be coached – you’ve either got it, or you don’t, and believe me, Bill’s got it, IN SPADES.” the spokesman enthused.

“There’s no doubt Bill’s perfectly suited to a floor routine and we got a glimpse of it his ability when he was floored at Monday’s presser.”

With declining revenues and dwindling participation numbers, it is hoped the new Super Gymnastics competition will be just the tonic St Leonards requires to keep the executive in the luxury to which they’ve become accustomed to over the last decade. The draft plan is not without its critics however, with some suggesting it is not in the best interest of Australian rugby to commit to the new competition, something the ARU rejects.

“There’s always naysayers, that’s just life. You’ve got to remember the ARU has got the runs on the board when it comes to getting things across the line. I mean, if you had have said 2 years ago that an Australian Super rugby team would be culled in favour of a Japanese team, that had no backing of its domestic competition, would play in an Australian conference and be based in Singapore, you’d have been called barking mad, but it’s now a reality!

“There’s only upside with this proposal and it’s full steam ahead.”

In acknowledging the gymnastics competition was not without risk, the ARU spokesman said that there was already some mitigation strategies in place.

“In the unlikely event this Super Gymnastics competition doesn’t yield the results we expect, the Board and CEO will take full responsibility for the situation and cull another Super rugby team in order to reduce our expenditure.”

It is expected the ARU will make a formal announcement on the new competition in the next 48-72 hours.