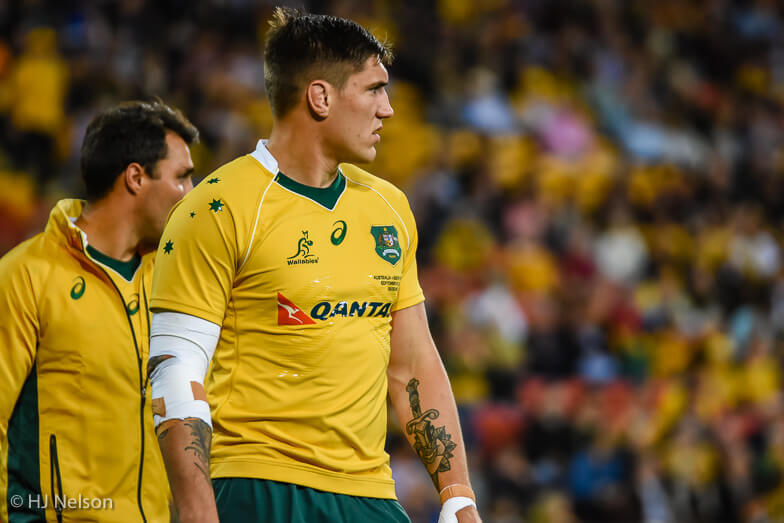 The Wallaby hoodoo at Loftus Versfeld in Pretoria continues as the Sprinboks defeated the Wallabies 18-10 in a match that was there for the taking for the Australians.

The intent was there for the Wallabies from the kick off as they opted to keep the ball in hand and both wingers got their hands on the ball early on for a couple of strong runs. Significantly Israel Folau was able to inject himself early on as well.

The Boks, in turn, were a lot more direct when they got the ball and put the Wallabies under pressure when they finally go their hands on the ball. They secured a penalty advantage early, More Steyn eats those opportunities for breakfast and took the drop goal to give the Boks a 3-0 lead.

While the Aussies kept running, the Bok defense was very aggressive and pushed the line at times, and soon enough they transgressed in tackling a support player and Foley was able to even up the scores with a penalty shot.

Morne boot provided some attacking impetus next with a deft chip putting the Boks hot on attack and it was only a smart Sean McMahon turnover they saved the Aussies’ bacon as the Boks were hard on attack. A big Hodge kick gave the Aussies a shot in the Bok half.

Scott Sio would soon dive over for his first test try, running on to a nice Sekope Kepu pass, but it was on the back of a lot of nice ball work and patient interchanges among the team, with Genia, Cooper, Hooper and Hodge all prominent. The conversion put the Wallabies up 10-3.

The moment many were waiting for came not long later as the Aussies were awarded a penalty about 65m out and Hodge took the shot. The accuracy was there but the distance was just shy. Steyn showed him how to do it, albeit from 40m out, soon after and the lead was just 4 to the Wallabies after 26 minutes.

The momentum swung more the Sprinbok way when Folau was sin binned for taking out Bryan Habana as he looked to regather his own chip. Not only were the Wallabies now down a player, but the Steyn kick cut the lead to just one.

Any hope the Wallabies had of clinging to the lead at the break was blown when Rob Simmons was penalised for not rolling away in a tackle (despite what many thought was a maul call from the ref) and Morne again kicked for sticks. The kick was good and the Boks took to the sheds with a 12-10 lead.

With Scott Fardy on for an injured Sean McMahon at the start of the half, the Wallabies were down one of their most productive performers for the rest of the match. The half started well though as Dane Haylett-Petty beautifully caught his team’s kick off and charged towards the line. Unfortunately, in a scene similar to many in the first half and would occur again too many times in the 2nd, the Wallabies failed to convert pressure into points and the South Africans got the turnover through Francois Louw.

The Wallabies got the ball and this time it was Quade getting the Aussies through the line and close to the Bok line but it was business as usual as the Boks secured another turnover to relief the pressure.

The replacements started to come thick and fast with the Boks changing both props just minutes into the 2nd half. Simmons was off for Douglas soon after for a concussion test from which he was cleared, but would not return from.

The Wallabies tried to convert their territorial pressure into points but a couple of off-target Hodge penalty shots meant they would continue to go unrewarded. When Sekope Kepu pounced in a loose ball and charged down the side line, it felt like the tide was going to change. The ball was spread wide but Cooper’s pass to Mumm was a little behind the man and the ball was knocked on.

Dane Haylett-Petty, who was one of Australia’s most dangerous on attack, countered brilliantly from a Steyn chip kick and again there was a try scoring chance for the Wallabies. Again the Boks were able to turn it over, this time through Strauss, and they cleared down field.

In the end that seemed to be the last real opportunity for the Wallabies as the Boks regained composure, off the back of some wonderful defense, and the territory would soon come.

From thereon in, it looked as though the Wallabies were gone. The Boks amped up the pressure and when Hooper was caught isolated and penalised, Steyn put the ball through the sticks to extend the lead to 5. It was all or nothing time now for the Wallabies, and with Sefa Naivalu making his test debut, the Wallabies looked to chance their arm. Disappointingly Folau was caught running high in attack and the Boks claimed the ball from the resulting maul.

While the Aussies scrummed well early, it was a different story when the replacement props were on and the Boks claimed a penalty from the scrum that followed. While the Aussies snoozed assuming Steyn would take a shot for goal, he took the quick tap and the Boks claimed some easy and quick territory which was recycled and allowed Morne to claim the 3 from a well taken 40m drop goal.

And that was that. The Wallabies failed to score a point in the 2nd half despite having a heap of territory and possession in the early stages of the 2nd half. The Sprinbok defense was very good but you can’t help but feel it was a game of lost opportunities for the Aussies.

The Wallabies basically had all of the ball hard on attack for the first ten minutes of the 2nd half. When they finished this period without getting across the line, the Boks seemed to lift in confidence while the Wallabies looked less composed.

Springbok captain Adriaan Strauss put in a monster effort with a number of significant attack inputs. But it was his work at the ruck, with some able support from the likes of Warren Whitely and Francois Louw, was crucial to his team’s win.

Will Genia was again prominent for the Aussies while Bernard Foley and Stephen Moore worked tirelessly (although the Aussie lineout again misfired). Dane Haylett-Petty was very dangerous in attack. For the Boks the backrow of Whitely and Louw was fantastic, while Morne Steyn’s composure and experience shown through compared to recent performances.

Yellow Card: Israel Folau (taking out the man without the ball)

QLD Country: The Thorn in the Eagle’s Side
All Blacks on track for clean sweep