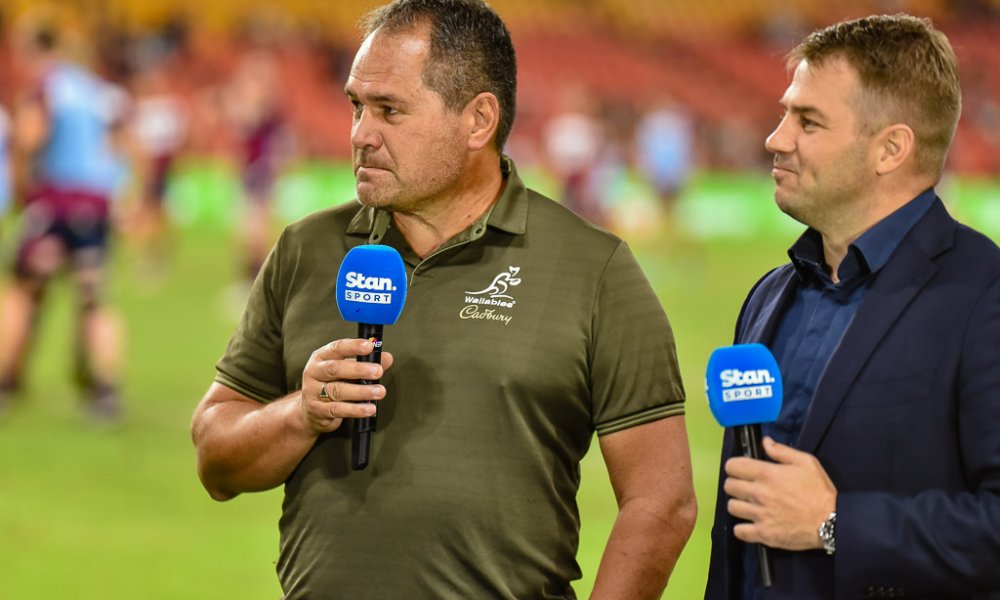 Happy Thursday everyone, big week with the Rugby Championship coming up so plenty to discuss. Our bipolar relationship with the Wallabies continues. Hopefully this week we are back to diamond not rocks.

Wallabies, it’s the Hope That Kills You – Opinion

We’re a fickle bunch as Wallaby supporters, one week we ride the high and the next week we’re back to our better halves keeping the sharp implements locked away.

I’ve been a massive Dave Rennie fan since his appointment, whether he wins or loses. Ever since Link (Ewen McKenzie) got knifed I felt like our coaching and backroom were at a distinct disadvantage. The truth of the matter is that we were a rabble.

I felt that we were working with a plan and as a fan I was prepared to forgo short term success for systemic and longer term building of depth but no more. The inclusion of Bernard Foley and the rumoured return of Kurtley Beale has me saying enough. I am sure they are fine men but, in my view, they are limited as players whose time has passed.

So as a fan I say this: I can cope with a 40% win loss ratio if I feel like we are moving in the right direction but, by bringing these two back into the fold you’re entrenching a losing entitled culture and if that’s the hill you want to die on then you’ll join the other coaches who thought they were the answer.

As the boys on the G&GR pod said the Irish get players who are good but not great and mould them into a cohesive unit to be a great rugby team while we’re looking for 15 superstars.

Watch out the for the Drua next year. The Fijian Drua Super Rugby Pacific franchise has a new chief executive officer, effective from October 17. The Fijian Drua yesterday announced that world-renowned and highly experienced sports leader Mark Evans is the new appointee taking over from Brian Thorburn.

Evans brings 30 years of experience and sports leadership, administration, coaching, and education to the role. He has previously served as chief executive of the Western Force in Super Rugby, Global Rapid Rugby, Melbourne Storm (NRL), Harlequins FC (English Premiership Rugby, a club he also coached) and as director of rugby at Saracens Football Club.

Evans founded and led a successful consultancy firm – Capacity Consulting – delivering several important projects for World Rugby, Rugby Football League, Rugby Football Union, Premier Rugby, and the NRL in Australia. Consistent among the many achievements in his various roles has been his ability to turn around finances and revitalise a range of areas including commercial, governance, football operations and high performance.

He was welcomed by Fiji Rugby chairman and Fijian Drua director Commodore Humphrey Tawake yesterday. “We are delighted to welcome Mark to Fiji to lead the Drua’s onward journey and help Fijian rugby reach even greater heights,” Tawake said. “The Drua was created to be that crucial link for our athletes between the domestic rugby competition and the Flying Fijians set-up. A strong Super Rugby Pacific franchise is critical for our aspirations of being among the top ranked rugby nations in the world. With his hands holding the oars of our Fijian Drua, Mark will guide the club to do exactly that. Thorburn, meanwhile, returns to Fiji Rugby as its general manager commercial. Evans, in a zoom conference yesterday said he could not resist the Fijian appointment.

“The opportunity to help build upon the impressive start made by the Drua was extremely attractive,” he said. “Our aim is to put the whole operation on a long term, sustainable, successful path and become real force in the competition and in doing so bring pride and enjoyment to all our supporters. I’m overwhelmed and excited to take on this path. This was something I really couldn’t turn down. The Drua project is a wonderful opportunity and I am excited to get start on an enjoyable journey and we’ll make people sit up and take note.”

Evans contract is for three years.

I would recommend listening the this Flats and Shanks Pod for an interview with him.

From the Fiji Times Here

Two things: one, a winger has no place talking about scrums, and two, I’m all in favour of speeding up the game. But my first place to start would be water is only allowed on the field after a try has been scored not for an (fake) injury break.

Rugby’s big men have found a vocal supporter in an unlikely place after pint-sized Wallabies back Andrew Kellaway shot down the notion of a scrum clock for Super Rugby Pacific.

Representatives of all 12 teams as well as member unions and broadcasters met to discuss the future of the rebuilt competition last week, with potential rules changes at the heart of their intention to provide a better spectacle.

A 60 second clock to form a scrum was raised as a way to increase ball-in-play time, a sore point particularly in games featuring Australian teams in the first edition of the expanded season earlier this year.

Suggestions like a player draft and removal of yellow cards for knockdowns have found support.

But veteran Wallabies prop Allan Alaalatoa and Andrew Kellaway, who could play fullback against South Africa in Adelaide on Saturday, were far less accommodating of any plans to rush scrum time.“We’ve got to be careful, don’t we?” Kellaway said. “It’s a niche area of the game where you’ve got guys doing a specialist skill.

It’s a bit of a national pastime to bag rugby particularly those from jail rugby and aerial ping pong, but they can’t compete with these and many other local and global events.

The Bingham Cup has just been played in Ottawa. Link HERE and HERE

There are plenty of others, feel free to list them.

If you think we have some financial issues that we’re working through have a look at the English game, there’re two teams under serious financial stress: Worcester and Wasps. Worcester are being wound up by the English taxman. Wasps have a bond that they are having issues paying back totalling some 35 million pounds. With talk of another in the wind.

The English salary cap is about 5 million pounds with a marquee player not included in the cap. Given that about 10 of the 13 clubs run at a multimillion pound loss year on year and are privately owned it is hard to find an owner who’s prepared to fund those kind of losses as a hobby. It does tell a story that it’s hard to make money unless you have a closed league such as the NFL.

“This is fixable and it’s not difficult but we have never had the political will or common agreement to do it. It is about the Premiership and it is in their gift, not the RFU. They don’t set the salary cap or have marquee players. It is all PRL. It comes down to getting costs in line with revenue.”

Have a great weekend people, Wallabies by ten and Hoss off the Long run tomorrow