Waratahs turn up the heat against Sunwolves in Tokyo 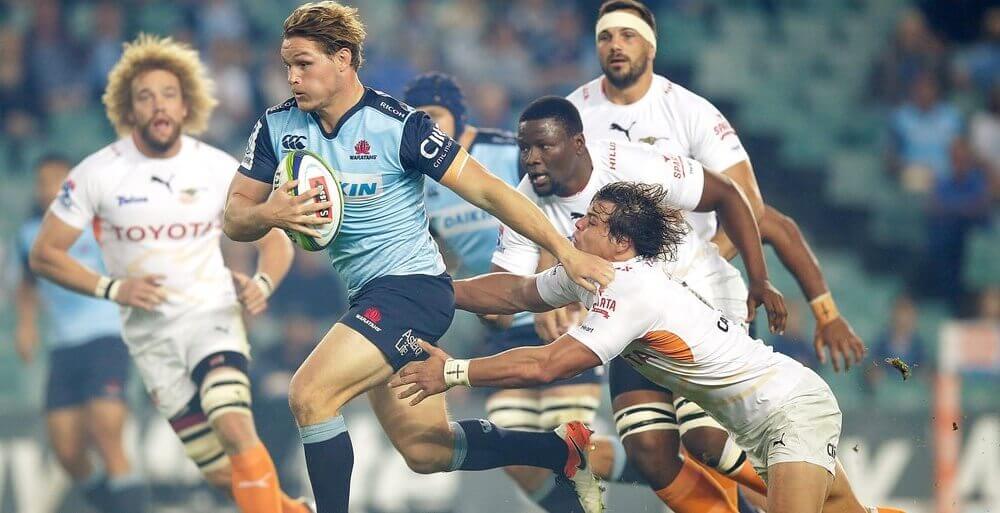 Waratahs turn up the heat against Sunwolves in Tokyo

It took the Waratahs a good twenty minutes to acclimatise to the heat in Tokyo, but once they took to the 30 degree weather, they put the blowtorch to the Sunwolves and ran away with a nine try victory.

From the opening whistle, everything from the Waratahs was scrappy. Perhaps a few of the players realised they’d forgotten to vote or were regretting not being at home to enjoy an election day democracy sausage with tomato sauce but it was clear their minds weren’t on the job. Line breaks were easy to come by but handling, passing and general execution were sorely lacking.

It took a Taqele Naiyaravoro offload to a flying Rob Horne for the side to go 80 metres with Matt Lucas finishing off the try next to the sticks. If there was one thing clear from that opening try that was to be a feature for the match it was support players were queuing up to get involved. Will Skelton, Michael Hooper and Lucas busted a gut in the heat to keep pace with Horne and were all involved to finish off the try.

A number of penalties and more frustrating play by the Tahs handed a series of penalty goals to the Sunwolves. An almost 60 metre kick from Riaan Viljoen with the wind at his back was something to behold. The ball sailed through the posts and probably had another 10 metres in it.

In the 24th minute, the Sunwolves made a half break down the left hand touchline and then kicked the ball ahead only to see it sail over the dead ball line. Much to everyone’s surprise, the contact on the kicker from Naiyaravoro was reviewed by the TMO and referee Brendon Pickerill. Pickerill must have been watching the Karate Kid in his hotel last night because somehow he thought the tangle of legs was a cynical sweep of the leg by Taqele “Cobra Kai Johnny” Naiyaravoro and showed him a yellow card.

With the Sunwolves leading 9-7, Michael Hooper laid down the law to his players and finally they showed some focus. It was clear that tries were on offer at will if only a little bit of patience was shown. Jack Dempsey landed the next blow with some nice footwork weaving his way through a couple of defenders and dotting the ball down to give the Tahs back the lead.

Two more tries before oranges saw the Waratahs lead 26-12 as the teams left the field for a well earned drink. Whilst the first half featured plenty of frustrating moments for Waratahs fans, the four tries to none lead was somewhat reassuring. After the Brumbies cantered home with a bonus point against the Reds, nothing less than a bonus point victory for the Tahs was an option.

The Waratahs looked much more composed in the second half putting on five tries in a half hour period that saw them run away with the match 57-12. Daryl Gibson emptied his bench early giving his key stars Bernard Foley, Israel Folau, Tatafu Polota-Nau and Michael Hooper more minutes on the bench than they are used to.

Some terrific offloading and excellent support play saw some great tries in the second half with Matt Lucas scoring perhaps the pick of them. His double was a just reward for a rare start and arguably his best game for the Waratahs. Despite a few erratic passes, his decision making was sound and a number of nice runs and great support play were fantastic to see. Sadly his day ended early when he rolled his ankle. Apparently the injury isn’t overly serious but it is likely to see him miss a week or two. Uncapped scrumhalf Jake Gordon could see himself on the bench next week.

It was a good performance by the Waratahs after the June break and they’ll be satisfied to return to Sydney with the five competition points and their season still well and truly alive. They’ll know that the Hurricanes pose a far greater threat next Saturday night in Sydney but the steely defence and excellent support play were very encouraging and are crucial for next weekend.

It wasn’t so much a game changer, but a third straight penalty goal to the Sunwolves seemed to kick the Waratahs into gear to focus on the basics and the tries started to flow from there.

Matt Lucas was a livewire in only his second starting match and directed the Waratahs around the park well and his support play gifted him two well deserved tries. An excellent match from the regular backup for Nick Phipps.

It’s likely he’ll still have a couple of years to wait, but Andrew Kellaway continues to show maturity beyond his years, an excellent array of skills and a great rugby brain. It has been a great debut season and most pundits expect to see him in Wallaby gold one day.

Force denied in a thriller
Foreign Exchanges – Round 15