Every year this match feels like it has been been years in the making.  It doesn’t matter who won or lost the last match, or had bragging rights for the last year, it resets for this match every year.  Memories are long, grudges are carried; this is not a match taken lightly by anyone who knows their rugby.  The Reds decided to play roulette with their team, making a raft of changes due to injury or smart-arsery only hours before kick-off.  Horwill out.  Frisby to flyhalf, JOC to fullback, Turner to the wing.  It was a big match for Benn Robinson, becoming the most capped Waratah of all time, a massive achievement. 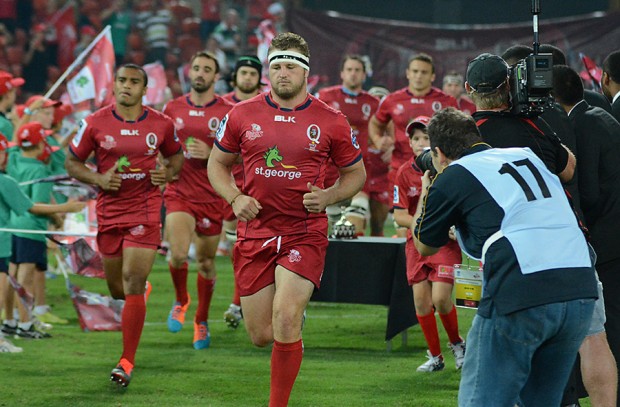 The only time the Reds looked coherent.

The match started with a series of aggressive plays by the Waratahs which caught the Reds napping defensively – ground that shouldn’t have been made was made as Peter Betham powered over Kuridrani.  The Reds defensive line eventually held and it was only several clearing kicks from Frisby got the Reds out of jail.

Reds fans had the joy of watching Israel Folau faceplant as he missed a sitter and if Frisby had flicked outside to Kotze, the Reds would have been in for a try.  This was to be the only joy for Reds fan for the first half.

The Waratahs were showing up the Reds lack of cohesion as they took advantage of the channels to keep the pressure on the Reds, and play in the Reds half.

Foley kicked one penalty and missed one, a lucky break for the Reds as their penalty count had started to climb and the match was only 15 minutes old – this was starting to look like a repeat of last week for an ill-disciplined Reds unit.  Admittedly the wholesale changes might have had an impact but at this level, it really should look like we were watching professional rugby.  The Sunnybank and Souths play this afternoon was more convincing that the play the Reds were producing and the crowd kept their mouths shut, not bringing their usual voices of support.

The debate about Kuridrani’s tackle or no tackle on Folau was healthy and the crowd disagreed with Glen Jackson’s call (as one would expect).  Watching it again I think it wasn’t malicious but rather foolish, and a mistake the Reds could ill-afford.

The try to Foley in the 25th minute really showed up the Reds backline – Turner missed a vital tackle on Beale who read the play beautifully and passed long to eventually put Foley over after a missed tackle by Genia.  Foley had scored all the points for the Waratahs in the first half.

The Reds scrum that had demolished the Force only a few weeks prior saw reset after reset.  At this point I could honestly sum up the match so far with ‘the Reds couldn’t take a trick’, but honestly Turner killing a kick for touch in the in-goal and Genia fluffing a tap-n-go had nothing to do with tricks and everything to do with rugby basics.  This wasn’t a match that meant the Waratahs were brilliant, but if the Reds could balls it up, they gave that a fair crack.

JOC missed both Reds penalties and the Reds entered half-time down 0-13.

<Losing the will to live>

Poor passing among the Reds line meant that they never made much ground.  And every time they made it into the Waratahs 22 they fluffed it.  Loose passes, forward passes, I lost count.  And just in case you think I am trowelling it on to the Reds and not giving the Tahs their dues for being fantastic, they didn’t set the world on fire either.  Maybe they realised they didn’t have to stretch, but their play wasn’t exactly top shelf.

TPN was binned for taking out a players legs while in the air, but the Waratahs scrum didn’t take a hit as Betham came in as flanker and they got a penalty of a Reds scrum.  A massive let off for the Reds happened a few minutes later as a Frisby kick was charged down by Phipps only to lose it metres from the tryline.

Hanson had a great charge down the sideline and the Reds looked like they were edging closer to a try and avoiding a total humiliation at the hands of their enemies.  An unforced error saw the ball coughed up and Betham wasted no time.  Players fell off him and only Frisby and Kuridrani kept the chase up as he steamed through to score under the posts and break Reds hearts even further.

If it wasn’t bad enough that Slipper left the field injured for the second time in three matches, Lachie Turner ran into Dave Dennis and is stretchered off the field in a neck brace.  This is a massive blow for the Reds already depleted backline, and another blow for Turner who has had three or four spotty years because of injury.  Word from the sheds is that he is ok.

The Reds may need to look for their backline solution in Chibba Hanson as he made a break for the second time in the match, but Curtis Browning didn’t know what to do out on the wing and didn’t change line or offload and the Waratahs ended up with the ball. <I can’t believe this match isn’t over yet>.

Thankfully for all the record books (the last time the Waratahs kept the opposition scoreless was against the Rebels in 2011). Marco Kotze crossed the line for the Reds in the 79th minute to lessen the ignominy of this match.    True to form, O’Connor missed the kick as the siren blew to end this.

The opening whistle.  Or more accurately, the hour before the match when the Reds performed their switcheroo.

Foley – solid in all facets.

Peter Betham is a big unit who did well in attack and defence.  If he continues to start and get game time he should be on the radar for RWC.