Stirling Mortlock (ACT): Gees he surprised me last year. Personally, I’m a fan of the dual playmaker option for 12. Lynagh outside Ella. Pappy outside Lynagh. Kafer/Howard outside Knox. Love it. I didn’t think Morty would offer us anything but crash ball. But I was wrong. He showed some deft touches and a handy boot. Regardless, he’s an outside centre and that’s where he should play for the Wallabies.

Berrick Barnes (QLD): Probably the realistic incumbent? Was the first choice for the jersey before injury put paid to his season last year. Started the season slowly but soon found his feet again. Unfortunately two shocking performances by the Reds of late have stymied his progression. A multi-skilled attacker and exception defensive tacker, its more about how he fits in with the rest of the backline they may determine his selection.

Matt Giteau (WA): Up until this year’s S14 most pundits, myself included, were suggesting that Gits’ best position remained this one. How much this has changed so far this season is anyone’s guest. Suffice to say he has been the form flyhalf of the competition, and now should be considered as one of the world’s best. Which doesn’t mean he shouldn’t be considered as a 12 option mind you.

Adam Ashley-Cooper (ACT): Can only really be considered on the strength of his performance there for the Wallabies against the Barbarians last year. Many people’s Man of the Match that night, he surprised most with his polished performance, albeit mostly in defence. The fact he’s now been mentioned for every position as a legitimate option, shows his versatility. Where he ends up will be the question however.

James O’Connor (WA): To be honest with every game he is moving closer to being a “likely candidate”. After all he is a Wallaby and one of the form backs in Australian Rugby at the moment, so why wouldn’t he be considered? His attacking abilities are unquestioned. His kicking game is close to the best in Australia (I said “close to”), it’s probably just his size and defence that will have questions asked. Regardless, his combination with Gits looked pretty damn sweet against the Reds.

Tyron Smith (ACT): a much unheralded player. Sure he was rookie of the year last year, but it would seem he never really got considered for significant representative duty. Again, this year, he started on the bench but when he got on the field he forced himself into the starting side with flashes of brilliance. Surprisingly agile on his feet for a rather solid lad, he is like what the Brumbies were after in Gene Fairbanks, except way, way better.

Timana Tahu (NSW): yeah ok, I await your derision. But I still see something there. And its odd. I am usually a proponent of the complete 2nd play maker at inside centre (ala the 2nd five-eighth), but I see the 12 jersey as TT’s best option. If he can fix his ball security, his strength, quickness of feet and ball distribution skills COULD make him a real weapon for anyone who uses him there. Give him a runner of note outside him (such as Horne for the Tahs) and it’s a combo that could wreak havoc. But currently he’s on the bench. Not much good there.

What is Deans looking for?

I’d suggest he’s looking for a pressure reliever. Depending on who he goes for at 5/8th, this position will be there to legitimately share the load. Someone to provide a second threat in attack, an alternative play making option, a solid tackler to protect the inside channel and an alternative kicking option.

Who is the answer?

In my mind the above rules out the likes of Ashley-Cooper and Mortlock. Sure there was some effectiveness last year, but that was last resort type stuff. Gits, for mine, is the obvious choice. But much depends on who plays 10? Barnes and, of late, O’Connor are the next likely choices, although I reckon JOC will be used in moderation. A game or two against Italy, maybe a run off the bench in the Tri Nations and then back to club footy in the build up to a more active involvement (possibly at fullback) on the Grand Slam tour. 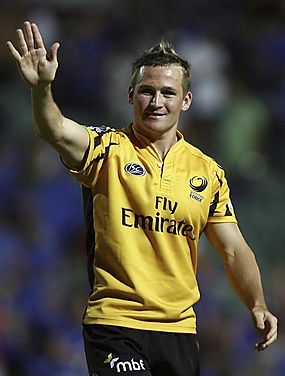 Hi, my name is Matt and I'll be your backline general this year!