They said you pissed in the kava

The opening test of the season is always an exciting time. The unknown. The whole season is in front of us and we could win them all! The Tri-nations, the Bledisloe back where it belongs, flog the Poms, clean up the oirish, and it all starts with this Fijian entree.

If this first match of the season is anything to go by, it is going to be a corker of a season… However as I sit here writing this, I have Sam Stosur flying the Aussie flag in the tennis on the TV and the way things are going for her (by now you know how it went), clearly the sheen of the 49-3 score line is just a thin thin varnish on a match that showed we can put points on, but also that we are very frail.

Unfortunately, like the tennis, everything went a little wrong after the kick off.Kurtley Beale, playing in his run on debut, had forgotten how to catch a football.

The first handling error, a knock on, saw fellow debutant Salesi Ma’afu pack down against his little brother Campese, becoming the first brothers to scrum against each other in test history.

Another Kurtley blunder had the potential to see the visitors go in early, the only thing saving us was Sireli Bobo, with the line open appeared to get a case of the no-catchies that were going around.

The highlights of the first half were a try to Kurtley from a trademark Cooper cut out pass and a strong run from Horne, also put into a gap by Cooper, which saw him stopped just short of the line, however he managed to get the pass off to AAC who gave it to nowhere man Dick Brown (who had come up with an ingenious way to keep out of trouble, keep out of the game) barged over the line for a try. Gits converted to see the halftime score at 14-3, well short of most people’s expectations.

The second half took off much where the first ended, with a Quade Cooper try about 2 minutes in, from a display the Socceroos would have been proud of (perhaps it was the new jersey?).  Another try 50 minutes in came from a Pocock turnover, when he popped the ball to Ioane who went on a great run to the line. Shortly after that the Fijians received the first of two yellows, this one saw the no. 9 Vucago carded for infractions in the ruck.

AAC was forced from the field with an ankle injury (This will see him spend some time on the sideline, though at this writing it is unsure how long), bringing Mitchell on. Shortly after that, in a horror stretch, Ben Alexander was stretchered from the field with what appeared to be a knee (confirmed later as probable grade 2 medial ligament tear, which will see him take a few weeks out, with scans to confirm).

Ioane’s second try came when he gathered a loose Fijian kick and jinked his way through their defence to score under the posts.

The second yellow then came for Fiji when replacement Dewes lost patience with the defence and threw a punch (surprisingly not cited) at Aussie Ma’afu. 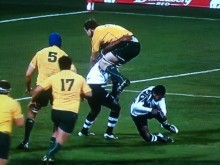 Up Up and Away - It's SUPER Rock

The Wallabies continued on, slowly building momentum with Rocky being penalised for inventing the vertical sidestep (as he jumped into a tackle while threatening the line) before the last try of the match to Beale, after Cooper put Ioane close, for his double.

Gits kept a perfect ledger for goal kicking and considering the way the Fijians seemed intent on smashing him (usually without arms) it was quite an achievement. Nathan Sharpe was named Man of the Match, in a fine performance from the veteran which saw him solid in all the things he should be solid in.

So, the first test is done, the Wallabies have put the Fijians to bed 49-3, all is well in the world… or is it. It must be pointed out that we have developed (through injury) a bit of a scrum weakness, the Fijians at least held parity in the scrum, and some may say gained some leverage there. If these “minnows” were able to hold us, how are we going to cope with the upcoming Poms? During the press conference after the match, Robbie was asked if there was scope to bring in reinforcements from outside the squad, to which he replied a flat “No”. He said that Ben Daley was looking like coming back sooner than expected and he believed there was enough within the squad to cover. The scrum woes are only part of the story.  There was a familiar feeling of our pigs not wanting to wallow in the mud and get stuck in. How hard is it to find forwards willing to do the grunt work?

Great Wallabies debut from Robbie Horne, solid without overplaying his hand, but most importantly without making a mistake, which is a great pointer to the boy’s temperament. Dingo saying “He had a great outing, so willing physical presence, got through a lot of work, and went looking for some more”. Make no mistakes, he will be a long term test player (if he can stay fit), and Australia’s next great no. 13.

The early handling errors were put down to the boys being a little too enthusiastic,  denying dew was a factor.