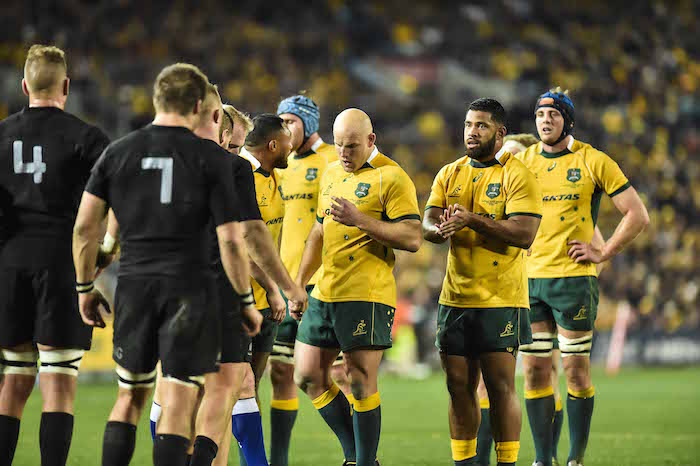 The task of handing out player ratings after copping a flogging is hardly much fun. Few of the Wallabies impressed and the Bledisloe Cup is lost for another year. The All Blacks found the form that went missing in Sydney and the Wallabies simply had no answers. A horror period whilst playing with 14 men put the game out of touch early in the second half. It was hard going for Wallabies and Wallaby fans alike.

Here are the ratings.

Was hit and miss at scrum time earning a penalty but giving away a couple. Kept up a pretty solid workrate through the game. 5

Got one lineout throw wrong although that’s about the extent that the lineout woes can be blamed on Squeaky. He was our top tackler and had a stronger game than last week in Sydney. Unfortunately he couldn’t stop his side from falling apart when down a man as the floodgates opened. 6

Dominated Tony Woodcock in the scrum and had some solid moments around the park. Had a good workrate through his 60 odd minutes on the park and made seven tackles, missing none. 6

Big Will had a couple of solid runs and strong ruck involvements but he needs to throw his bulk around more often. There’s physicality but it needs to be in the form of more strong tackles and destroying breakdowns. 5

Big Kev had another strong game. Whether asked to play tight or lose head lock he gets the job done. Had excellent ruck involvements and made ten tackles. Got caught out not getting across fast enough to close the line on the initial bust for Dane Coles’ try. 7

Scott Fardy had the highest workrate of the Aussie forwards but was less involved with ball in hand compared to Sydney. Had one lineout steal but also lost one of our own with an error. We needed this sort of workrate from more of the pack. 7

A tough night in the office for Michael Hooper. He copped a head knock in the first half and whilst he toiled hard, he struggled to put his stamp on the game. 5

Was our leading tackler in the first half. Everyone expects more from Big Cliffy but he was one of our best forwards in the first half. Pocock is clearly a better option at 8 but expect to see Cliff playing when the Pooper isn’t starting. 6

Couldn’t produce enough of the fast service the Wallabies need to play their game. Whilst all our halfbacks have issues, expect to see White reverting to his bench role. Worked hard but needs to clear the ball faster when it becomes available. 5

It was hit and miss for Quade at Eden Park. Had some nice touches combined with a couple of errors in the first half. His yellow card early in the second half when a try was certain was a killer for the Wallabies. The wheels fell off in the ensuing 10 minutes and Cooper didn’t return to the field. Real issues for the Wallabies trying to settle on their fly half. 4

A Dane Coles swerve caused him to lose his footing as Coles sprinted away to score the opening try. Missed a couple of tackles but was one of our only backs to threaten. Diffused plenty of threatening situations. 5

Matty T couldn’t reproduce the outstanding form he showed in Sydney. Made two terrible kicks early in the second half which both resulted in tries to the All Blacks. It was an uncharacteristically poor game from Toomua and the first blemish in what has been a tremendous season so far. Will be competing fiercely with Giteau for the 12 jersey but needs to erase the poor decisions if he wants to stay in the starting side. 3

A pretty quiet night for Tevita. Was worked hard in defence all night and contributed at the breakdown. Unfortunately opportunities in attack were few and far between. 5

Whilst this was probably the best game of Henry’s fledgling Wallaby career he didn’t really get the opportunity to show his flair in attack. Defended solidly but struggled to get into the game. 5

Despite a couple of errors, Folau did a sterling job under the high ball for the Wallabies. Whilst our kicking was hopeless, the All Blacks produced contestable kicks on a consistent basis. Folau managed to defuse most of them and he’ll surely face much of this at the RWC. 7 G&GR Man of the Match.

With Stephen Moore as the Wallaby captain, Tatafu’s minutes are likely to be limited most weeks. His workrate is good but needs to improve the accuracy of his involvements. 5

Tackled well off the bench and scrummaged well. Whilst we’d love to see more of Slips with ball in hand he’s doing a solid job off the bench. 6

There’s no doubt Holmes is contributing to a better Wallaby scrum in 2015 which continued in Auckland. With touches in attack rare, he’ll be disappointed he made a handling error. 5

Mumm improved things slightly at the lineout but was barely more involved than Skelton. Not nearly as good as his efforts in the last two tests. 4

Received a reasonable amount of time in his return to test rugby but failed to make an impact. Would seem very unlikely to go to the RWC unless Rob Simmons fails to recover. 3

Played a bit over half the game but couldn’t produce the same impact he has previously. Plenty of tackles and heavy involvement at the breakdown had Pocock amongst our best but that wasn’t enough to make a lasting impression on the match. 6

Gits entered the fray after Cooper’s yellow card but spent much of the next 10 minutes standing in his own in goal waiting for Dan Carter to kick a conversion. Failed to have much impact on the game but don’t be surprised if he returns to being Cheika’s first choice 12. 5

Played the last 20 or so minutes once Cooper’s yellow card expired. Made a couple of strong tackles which hopefully is the start of a new attitude in defence. Didn’t get much of a chance on attack. 5

THE PATENTED G&GR RATINGS GUIDE:
10 – A legendary performance to go down in the history books
9 – Outstanding performance: Man of the match shoo-in
8 – Excellent all-round game
7 – Good game with a few sparkles
6 – Solid performance
5 – Average – ho hum
4 – Below par
3 – Had a bad game
2 – Tell your story walking pal
1 – A complete joke