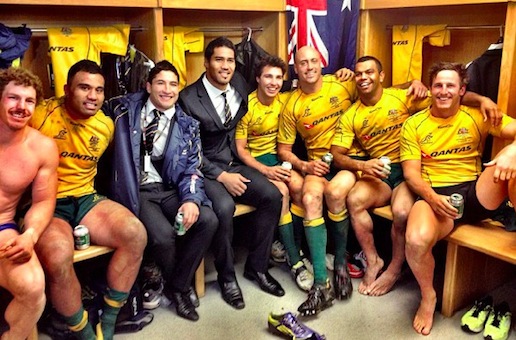 The Wallabies have defeated Wales 14-12 in Cardiff, sending  skipper Nathan Sharpe out a winner.

Both sides had significant motivation to win. Wales, faced with the prospect of dropping out of the world top 8, needed a victory to ensure a favourable RWC 2015 draw. The Wallabies not only had major question marks around their form, but the motivation to get up in Sharpie’s final match.

It could and should have been an epic match, but the form of both sides heading into the clash suggested it would be a fight to the bottom — and so it was. Fought by two impatient, error-prone and kick-happy sides and punctuated often by referee Wayne Barnes’s whistle, it was hardly the best advertisement for rugby.

While the Wallabies got the win, every positive feeling is hollow.

The match opened to both sides chancing their arm with ball in hand, but being well defended against. Granted, this period of play only lasted until the fourth minute, but signs were good. Australia, having kicked off, largely kept play in the Welsh half with some good pressure.

Wayne Barnes soon gave hints as to the performance he’d display for the rest of the match. A pedant’s penalty was awarded to Australia 25 metres out and on a slight angle. (Berrick) Barnes’s dodgy groin meant that Kurtley Beale would be handling Wallaby shots at goal, and his first effort was one to forget — the relatively easy shot skewed left. 0-0.

From the restart, the sides traded aimless kicks in a game of aerial ping pong — each largely kicking to their opposite men. When Australia finally kept some ball in hand, we did little with it.

We weren’t, however, helped in our efforts by referee Barnes. Somewhat ironically (especially given the venue), Barnes erroneously called a pass forward when it, by all accounts, was back — ‘at least a metre back’ according to a biased Welsh mate of mine. In so doing, a promising Wallaby break started by Adam Ashley-Cooper was snuffed out.

This break the anomaly, the Wallabies backs and especially Beale were playing well behind the advantage line in attack in a pattern that was to continue for the bulk of the match. Though largely bereft of creativity in their efforts, anything novel that was attempted failed to trouble the Welsh defence . It was telegraphed early and easily read in advance by the solid wall of red.

In the twelfth minute and off an attacking lineout, the Wallabies mauled toward the line to good effect. As the maul broke down, Phipps spun the ball to… Mitchell. One out from the maul, it was handed to a winger lacking both support and ankle ligaments, and possession was promptly turned over. It’s these brain farts that are killing the Wallabies… and their supporters.

Soon after, it seemed the Welsh crowd had got their beers and found their seats. Suddenly, Millenium Stadium was loud, and the Welsh lifted.

That said, the rest of the half see-sawed with no real dominance by either side. Beale and Halfpenny traded penalties (three of them 50 metres-plus), and Australia went to the break up 9-6 (Halfpenny missing a simple shot at 40 minutes).

The Welsh lineout was rubbish, their scrum not so much. The Wallabies were able to, by and large, secure clean ball from the set piece. Even our restarts were passable — certainly better than those of many games past.

In the 22nd minute (for the first of many times in the match), Wales showed the Wallabies how to execute a chip kick — chasers were ready (and fast) and the ball lobbed just over the line; it was contestable.

The Wallabies, conversely, had not learned their lesson (is anyone surprised?). Frequently, long kicks went straight to either the Welsh back three and any attempted chip was comfortably covered by the men in red. (A shouted, exasperated Berrick Barnes f-bomb heard over the ref’s mic following another miscued kick was poignant.)

Our defence was rubbish in the outside channels. Wales kept finding space. Ben Tapuai had his worst game in gold, often picking the wrong man (and double-marking) and making the job that much harder for his outside men. Compounding this, the Honey Badger similarly found himself in the wrong spot a number of times. Barnes cleaned up well out the back on quite a few occasions.

Welsh impatience, some good forward play (most notably by Robinson and Pocock) and Wayne Barnes’s fastidious refereeing snuffed out many Welsh raids into the Australian 22.

I’d written over a page of notes for the first half but I wrote less than half a page for the second. It was dour, uneventful and played out much the same as the first. Both sides committed the same errors, exhibited the same impatience and the same poor execution. The Wallabies continued to forget what support play looked like.

Stephen Moore started the half in place of TPN, with Digby Ioane and Michael Hooper soon joining him. Their contributions were noticeable and effective. Moore was good, as always, around the park, Ioane gave hints of form we’ve not seen him carry in a gold jersey in a while, and Hooper, tag-teaming with Pocock, was typically energetic.

The game rolled on, Wales kicking six points in six minutes midway through the half taking them to a 12-9 lead. So the score remained into the final minutes.

In the 79th minute, the Wallabies built a prime attacking opportunity from their own half. Some atypical patience set a good platform, upon which Berrick Barnes engineered a beautiful break, only to be tackled on the Welsh 22 without any effective support nearby. The ball was turned over and belted downfield.

All seemed lost. I was angrily scribbling, briefly snatching glances at the screen. On one of these, I saw Barnes float a great cut-out ball wide. From their own 10 metre line, Harris linked well with Dennis, sprinting down the right touchline.

Beale loomed up on Dennis’s inside shoulder, Dennis timing the pass perfectly having drawn Halfpenny in. The pass was very flat, but it was flat — that Dennis’s forward motion was halted by Halfpenny’s tackle made it appear to float forward. Beale did the rest from 30 metre out, dotting the ball down out wide to break Welsh hearts.

Sharpie, going out in style, lined up the touchline conversion. The strike was sweet, and actually in line, but it fell just short. I think we can forgive him. Bravo Bullet on a stellar career.

As for the Wallabies, well, it’s still an awfully long way to the top….