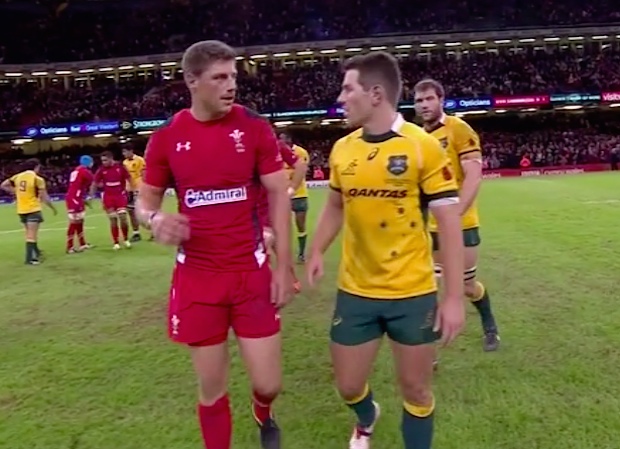 Another test against Wales another close win for the men in gold.

The Wallabies dominated possession but Wales were a shot for victory right up until the final whistle.

Here are my ratings:

Lost the ball in contact early and was up against it in the scrum. He was busy, but didn’t have his best game in gold, conceded a penalty try. 5

Had a few typically effective “chopping” tackles, but had a few errors too. 5

Seemed a little off the pace and was part of the penalty try conceding scrum. 5

Wasn’t a great outing for Carter with a few errors and he was pulled off after fifty minutes. Intercepted a loose pass in the first half. 5

Had the most line out takes for the game, didn’t stand out in general play but was solid. One silly penalty knocks him down a point.  5

Had a bad defensive read to gift Wales their opening try. Coughed up possession, but worked hard and will probably learn more from this match than the last. 4

The captain set up Folau’s first try with a neat offload. Tackled well all eighty.  6

Had the most runs of any forward and tackled like a machine. 7

Phipps continues to look more at home in the Wallaby 9 jersey. Took the right option most of the time and was tirelessly quick to the ruck for his seventy minute stint. 7

It was good to see a Wallaby ten that could position himself well and comfortably slot a high pressure drop goal. Kicked perfectly from the tee and directed play well against a good Welsh defensive effort that was determined to fan out and avoid contesting the ruck. 7

Had a smattering of good runs, particularly in the second half.  6

Played well with a few good runs, but also lost the ball on the deck more than once. Didn’t look out of place but didn’t do much to cement his position either. 5

Had the most runs of any player (14) and smashed through to collect a try . He’s becoming the Wallabies most potent weapon and the fear he puts into defenses will only make things easier for his team mates. 9 and G&GR Man of the Match

Had a great allround game. Cut through from first phase ball to open the second half and held up George North over the line to deny a close range try. 7

You just can’t keep Folau off the score sheet. Scored one try from a great piece of anticipation and support running and plucked an intercept while marking two players to get his second. 8

Solid input for twenty minutes, nothing flashy. Was part of the penalty try front row. 5

Got his first Wallaby cap. Didn’t let the side down but wasn’t overly visible. 5

Scrum didn’t do any worse when he entered the fray. Interestingly decided to switch play a couple of times in attack. 5

Was good to see him get a good twenty minutes, made an impact in both attack and defense. Looks to be packing a bit high in the scrums, but perhaps it’s due to his enormous frame.  6

Only got ten minutes but made a few runs and some good tackles including a vital forced penalty when he got over the ball with Wales hot on attack.  7

Tackled well and showed good energy after slotting into inside centre for the last five minutes. 5