Wallabies v. Springbokke in Durban – As it happened 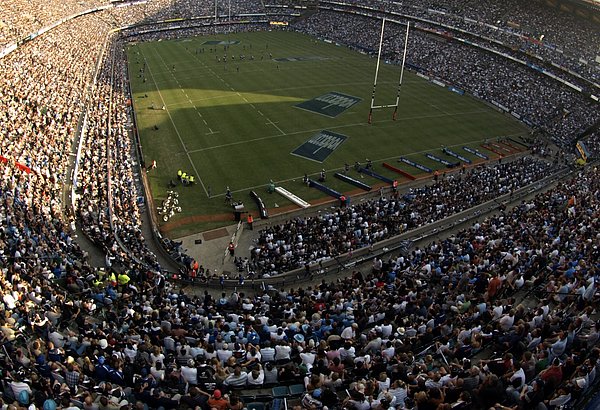 Wallabies v. Springbokke in Durban – As it happened

Join us from 1:00am AEST for live coverage and wanging on as the Wallabies play for a hat-trick of victories over the Springboks.

Our quick match report will be updated below as it happens, please refresh to see the latest news.

The ground is packed and the crowd look excited. Bryce Lawrence blows the whistle to start the game after a terrible effort on the Anthems from the South Africans

Australia controls the ball for much of the first 5, but much of the good work is spoilt by silly penalties and loose passes. Springboks 5-0

This 5 is scrappier from both teams. no score the Australians are still trying to play wide the Springboks are settling into a kick and chase game.

The South Africans turn down an easy 3 for a line-out. They go to the backs and knock on 2 phases later the scrum collapses and they kick for goal. Strange decision. Springbboks 6-0

Silly penalties from the Wallabies are costing them points. All the Springboks need to do is get into the Australian half to score. Not rolling away at the ruck penalty South Africa. Butch James misses the kick.

The Australias continue to waste opportunities. Passes are being pushed too often. Jaque Fourie nearly scores after a good Fourie du Preez kick. Only a knock on saves the Wallabies.

A Butch James drop goal just sails wide of the post. Great bit of play from the Wallabies. Nice short passing and a good kick finds them deep in Springbok territory.

Horwill gets caught without support and the Wallabies miss another chance to score. The wallabies are not holding onto possession and not building pressure. The South Africans are living off the scraps.

The Wallabies have their first chance to score in the 37 minutes. The Sprinboks have controlled the game beautifully. The ball travels from end to end. First the Springboks move the ball from deep in their half with some great interplay between the backs and forwards. Horwill steals the ball 5 metres out and the Wallabies counter attack. They travel 90 metres after finally holding onto the ball and applying some pressure. Two metres out and Bryce Lawrence inexplicably pulls a ruck up and calls a scrum. And that’s half time.

De Villiers knocks on after the first ruck of the second half. The Wallabies win a penalty from the third scrum reset. O’Connor slots it springbok 6-3

The Australians score! After three frustratingly slow rucks in the Springbok 22 a simple slip from Brousow opens up the field for McCabe to score. O’Connor lines up the kick from the side line but pushes it right. Australia 8-6

Lawrence inexplicably fails to give Australia a ruck penalty for playing the ball on the ground. Then seconds later penalises Australia at the very next ruck.

Samo on! Anthony Faingaa on! Both players in the action straight away. 20 minutes to go and this game is balanced on the knifes edge. Anthony Faingaa puts his hand up for a bigger role with the Wallabies with a brilliant tackle on pieterson and winning the Wallabies a shot at goal. O’Connor slots it and the Aussies are back in front 11-9

Only one team is getting penalised at the ruck tonight. Gio Aplon having trouble with the wet ball. Australia have a scum just in the Springbok half.

Australia win a scrum turnover from another poor decision after both front rows stand up Lawrence awards the feed for going through the 90. The Australians push the Boks back 10 metres in the next scrum before they collapse and give Australia a penalty in front of the posts. Australia 14-9

Both teams can still win this. The ball is in the middle of the field with the Springboks in possession. The Springboks have a lineout 30 metres out. Kepu comes in from the side and they win  a penalty. The set up the lineout 7 metres out. The boks smash the ball up trying to get over the australian line until Rousow knocks on. Pocock kicks the ball out for an Australian win.