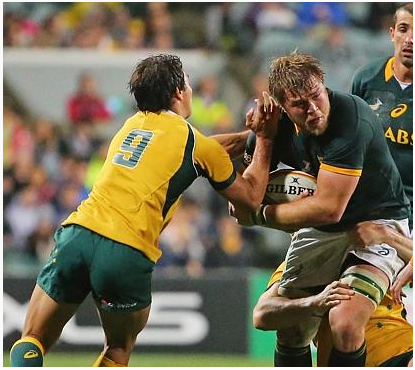 I thought we played pretty well on the weekend.

We were ahead until the last ten minutes, and right in the game until the last three. Ultimately in those final minutes the Boks played great error-free rugby and we coughed the ball up and fell off tackles. The Boks played very well, building pressure through the opening hour that eventually told in those dying seconds. I don’t think we can be too critical of the Wallabies, who muscled up bloody well in one of rugby’s toughest environments.

Continued his outstanding form. Got through plenty of work in defence, and had a couple of nice touches with the ball in hand. Scrum was stable, which is all you can ask. 7

His first international appearance this year, and it was pretty bloody good. Made plenty of tackles, took a nice turnover, threw straight and true all day. An important performance for his World Cup chances. 7

The unsung hero of the day, he had a bloody ripper. Ran like a number 8, tackled like… well, a number 8. Held up the scrum well. The best run of form from an Aussie tighthead for over a decade I reckon. Only fitting that he gets an 8

Only had a half before being subbed after getting in a horrible position trying to tackle Adrian Strauss. He was good in that time, had a few nice runs and big hits. A shame he was injured because he was starting to run into some form. 7

Welcome back! Had three great steals, made a bunch of tackles and plenty of big runs. This was the Fardy of old, long may he reign. 8

The standard Hooper effort once again, he just worked all day and never stopped. Was a constant presence at the breakdown, and was unlucky not to get a steal or two along the way.  7

Got through plenty of work before being subbed for Higgers at the 50 minute mark. Wasn’t at his barnstorming best but I don’t think anyone can really complain. 6

On first viewing I thought he was poor, but when I watched him closer my opinion changed. Yeah he threw a few loose passes, but they weren’t shockers. Overall he kept the pace of our game high and was accurate 95% of the time, so I think that’s a decent game. 6

Not a dominating performance for the ages, but he didn’t make any big mistakes and chose his options well. Missed a few tackles, which is a worry, and his kicking game is still not quite where we need it to be. 6

Industrious when the ball came his way. Had a few big hits, a few nice runs. Pretty good for his first game in gold this season. 6

Not a shocker, but certainly below his best. His kicking was very poor, especially the two horrible grubbers and the one missed touch from a penalty. All three errors were crucial in the context of the game. Defence was good and attack was OK, but I think Link was right to sub him for Beale at about the 50 minute mark. 4

BOOM! How good was that? Big hits, big runs, broken tackles, broken bones. Lock this bloke in for the World Cup, and maybe the one after that, too. Mortlock-esque, he had a blinder. Only blemish was being caught out of position in defence a few times in the first half. 9 and G&GR Man of the Match

Like Tomane, he never let the side down when the ball came to his side of the field. Ran well, took a nice pilfer late in the game. Typical AAC effort. 6

A quiet game by his lofty standards. Went looking for work, and really only made one mistake (wayward offload in the first 20 minutes). Boks deliberately kept the ball away from him (you can’t blame them), and made virtually no errors so he had no chance to counter. 6

Did OK, but a botched lineout and a missed tackle were two big blunders in the leadup to Lambie’s try. 5

Had a few nice little runs, dived on a loose ball, pressured the breakdown. Showed there is life in the old dog yet. 6

Coughed up the ball at a crucial stage late in the game.  OK other than that. 5

Got through a barrel-load of work in his 40 minutes, but still hasn’t found that killer instinct on attack. 6

Plenty of tackles, a lot of good work. Can’t really fault him. 6

Why has he become the scapegoat for the loss? Made one error, missed one tackle (of the nine he attempted) and had no real part in any of the Boks three tries in the final minutes. He wasn’t great, but he was no better or worse than any of the other subs, really. Suffering for past sins, it seems. 5