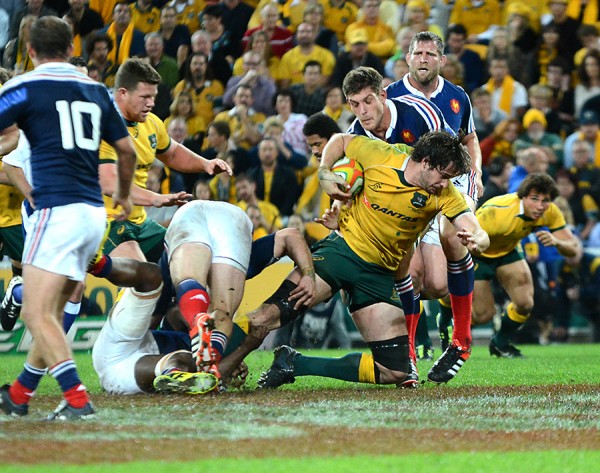 Not a bad first up performance from the boys in gold right? Link’s coming ‘home’ test, his first as Australian coach in Brisbane, saw the Wallabies wallop a flaky French team, but how were the individual performances?

The Wallabies have failed to win the first test of the year for three seasons now, so a 50-23 defeat of the French in the first test of the 2014 season was a confidence booster for the new-look test outfit.  The team was heralded as one that was picked on Super Rugby form, so how did that form translate onto the test stage?  Here’s how I saw it:

Has been outstanding for the Reds and continued his form for the Wallabies with a prominent performance across the park. Showed some very decent ball skills in the first half, particularly in the lead up to the first try.  A tireless defender and reinforced his position as one of the Wallabies’ key forwards.  8

For the second time in two years, the Wallabies’ first test at Suncorp has seen injury cruel a debut game. Last year it was Lealiifano v the Lions, and this year it was Stephen Moore’s captaincy debut. Moore was off after five minutes and we won’t site him again until next year. Shattering. N/A

Site unseen for most of the test with a disappointingly low work rate. There were all sorts of problems in the scrums, by both teams and the ref, but Kepu failed to provide the cornerstone of solidity we required. Unfortunately our depth at THP is glaringly lacking. 4

Sullied an enterprising performance but some glaring mistakes from the restart, as well as another frustratingly stupid penalty. It was enough to bring his score down from “Excellent” as he was exceptionally productive around the field. Called himself every line-out whilst he was on the field, and won them all. Showed a nice touch in the lead up to Hooper’s try by straightening the attack well. 7

An excellent debut game by Carter, which unfortunately will be the last we see of him in the Green & Gold for a little while due to an injury that’s too hard to pronounce let alone spell. Wonderful work rate for the full 80 saw him lead the tackle count. Apparently voted Players’ Player which shows how much his team mate’s valued his big hearted performance.  8

It is easy to undervalue the contribution of Fardy in this test, now that we’ve set such a high expectation upon him following a stirring 2013 season, in which he was awarded the G&GR Wallaby Player of the Year. Fardy was not as dominant as in some of his previous showings, but he’s a vital cog in this team and worked his heart out against France.  7

An absolute dynamo across the field in both defense and attack. Let’s not forget this is guy is still only 22 and played his first test a little over 18 months ago. Thrown the captaincy ‘burden’ on Moore’s premature departure, he barely skipped a beat. So effective in everything he did, Hooper is the modern day footballing example of perpetual motion. An astute decision to kick for touch from a penalty early on, lead to the first try and started the golden onslaught that would follow.  9 (GAGR MOTR)

None of the impact we need from our Number 8. Ran for minimal metres, was effective in defense rather than assertive and was purely serviceable around the ruck. Needs to lift his game with this being the position with significant depth in the Wallaby squad. 5

A solid test match by White that included an early try-saving tackle, solid service from the ground, an adequate kicking game and on the whole very good decision making across the park. His combination with Foley was largely trouble-free and promising. 7

Provided a serviceable game in his run on debut. Mixed his game up well enough and fed his outside men consistently. Chanced his arm a few times, never overly effectively, and is far from the dominant organiser Wallaby fans are used in the 10 jersey. Missed far too many tackles which needs to be addressed. Solid goal kicking and worth persevering with. 6

The Honey Badger had a dead set corker of a game.  Took a while to get into the match, but was always ready to give it a burl when play came his way. Went close to meat a couple of times, before being set up by Izzy for some in the second half. Threw everything into all aspects of his game, making some big hits at critical times and never shirking a strong hit up when his team needed it. 8

Fast developing into the critical player in the Wallaby backline. Izzy aside, Matty is the must-pick selection for the Aussies.  Started poorly with some early weak defense, or poor reads, but more than made up with it with some critical defensive plays later in the game. Scored a try and set up another in an all-round polished performance. 7

Seemingly made metres at will which has been lacking for the Wallabies at outside centre since the days of Mortock in his prime. Pulled off the hit of the night in the 2nd half, before being pinged for not rolling away. This still somewhat typifies his game at the moment as he can let brilliant plays down with ill-discipline. Love the enterprise in his tap on pass for Hooper’s try. 8

A typically reliable performance from AAC.  Very effective in attack and caused some damage outwide. Makes up for the lack of speed of a traditional finisher by running astute lines. The ever Mr Reliable delivered again. 7

A brilliant game that can’t really be faulted. It was only really his lessor workload, when compared to Hooper, that denied him Man of the Match honours. The biggest surprise in the match was when he actually failed to beat a defender in one play. We’ve been boasting of his dangerous running since his debut test last year against the Lions, but this game showed his improved kicking game and intelligence in setting up his team mates as well. Oh, he’s handy in the air too. 9

The Wallabies must be thankful for all the minutes TPN has had at Waratah level this year, as he was called on to play all but the first five minutes of the game. Taf is playing such a tight game these days, based on 100% effectiveness rather than the flashy big plays. Very busy around the park, and bang on in the lineout.  7

Played just under a quarter of the game, which is borderline for ineligibility for a rating, but failed to provide the impact from the bench needed. The scrum definately deteriorated when the replacements came on, so Cowan must cop some blame here.  5

Played approximately half an hour after coming on for Kepu, but unfortunately had a bit of a stinker. Was penalised a couple of times and couldn’t anchor the scrum. There’s not much depth around at THP in Australia at the moment, so we need him to bounce back for next week. 4

Only played the last ten minutes, replacing Simmons, but played with the passion and ferocity we’ve come to expect from Big Kev. Was a monstor at the ruck, but slipped off a weak tackle. Was also part of a disintegrating last scrum. N/A

Came on for Palu with about 25 minutes to go and while busy, again didn’t make much of an impact. Tackled and ran, but with no real threat to the opposition. 5

Was pretty dire when he came on for White with just under 20 to go. Threw a couple of shockers and seemed panicked easily. Hard to see that justifying his reselection above Genia for the 2nd test. 4

Really came on at the right time for him, with nothing on the line and the French playing so loose. Still ran cross field but had a free reign to try things it would seem. Still only a bench player.N/A

Played the last ten for Kuridrani and didn’t get the chance to do much other than run away and score a try Good to see him back in the national jersey.N/A

So what do you reckon? Too harsh? Too soft? What do you think I got wrong or right?