Sitting in the bar of the hotel in Auckland after Bledisloe 1, I bumped into James Horwill as the team was heading out for a quick dinner before jumping straight on the plane to Africa.

Needless to say he was gutted, and not just because they had missed out on a golden opportunity to stick a psychological blow on the Kiwis. The overwhelming feeling I got was that they were acknowledging the disappointment of the result, but seeing the chance for redemption in the form of some silverware. Kev stated that the team was still in a strong position to claim the Tri Nations, so I thought in the spirit of moving on, just how well are we placed? So let’s take a look.

The Tri Nations trophy would be a massive ‘deposit in belief’ for the ‘One Team’ as they move into the delivery stage of ‘this unique group’s’ journey. With all three teams having played two matches each we are exactly halfway through, and it appears New Zealand is in the box seat. The Kiwis have banked 9 points from two wins and one bonus point for scoring four tries against the Springboks. They’ve played both their matches at home, though travel rarely bothers them.

Speaking of the Springboks, they have started on the road, and given the injuries most of their frontline squad have recovered from, they should be much stronger at home. With no wins and no bonus points, they are sitting on the bottom of the table with 0 points.

So that leaves the Wallabies in between. While their position on the log is probably indicative of the season so far, it feels like a major dent has been put in our expectations. They have played one home game, the 39–13 bonus point win over the South African touring team, and one away, the 14–30 Eden Park disaster. So far they have 5 points only from the Sydney Test. The table looks like this:

While it goes without saying we would prefer to be sitting a place higher on the table, we have these coming fixtures in which to set things right:

After a typically bruising Bledisloe encounter at fortress Eden Park, the Wallabies were given no time to dwell as they walked out of the change rooms and onto a plane. How well they cope with this schedule will go a long way to deciding this match. There is little doubt they will be out to silence the growing chorus of criticism of the team, in particular the ever-expanding coaching team, with a solid victory in the Republic. Out to stop them, and prove he was right to leave 21 players home to recover, will be Pieter de Villiers and his A team. Though they will be well rested, they may be a little short of match fitness compared to the battle-hardened Australians. They may have some issues with combinations, though the players coming into the team are all seasoned professionals, so this should not be too big an effect.

Dream Result: This is going to be a tough ask, but I think it is doable. We tend to have an easier time against the South Africans, and their lack of recent rugby will allow us to bag the win. We need the bonus point. 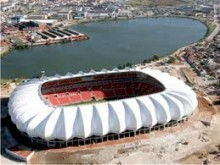 Best case scenario: the Springboks, with a game under their belt for their combinations and smarting from their drubbing at the hands of the Wallabies, will come out and beat the Kiwis convincingly enough to deny them even a loser’s bonus point. Couple this with the talk that Carter and Richie will be sitting this one out in favour of a quick flight direct to Brisbane, and things look good for this result.

Dream Result: The Springboks to upset the New Zealanders and deny them a bonus point

If everything has gone to plan to here, the Wallabies will be on top of the standings at this point. The Kiwis will be under a new pressure, fighting to keep the cup they earned back from the South Africans just last year. The big differences from the last time the Wallabies took on The Darkness will be that the Wallabies will be recovered from their trip from the republic and it is in our fortress. Suncorp Stadium has been the happiest of hunting grounds for the good guys, and though we are yet to defeat New Zealand there, I think — to borrow the Reds’ catchphrase — this is OUR time. Coming into this match the Wallabies are on 10 points, the Kiwis on 9. The Tri Nations is ours to lose.

Dream Result: You don’t really need to be told do you? You know what it is.

So there you go Kevvy, the hard work has been done. You just need to get Rocky and the Boys out there and actually make it happen. You can thank me later.

What do you reckon? Doable? Dreaming? Done?