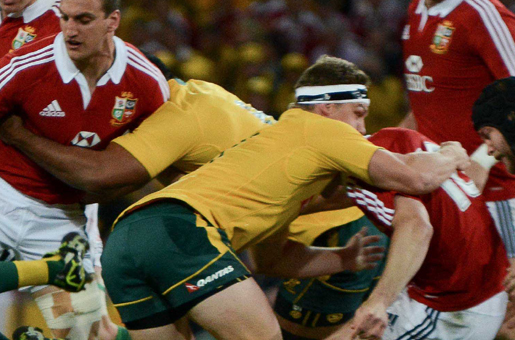 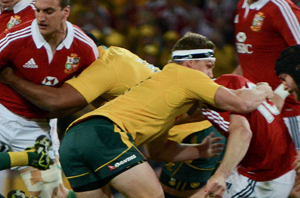 Lots of work from Hooper

The Wallaby forwards played well in the second test against the Lions and built the platform for a gutsy win. I thought the tight five were particularly good.

In the first half the Lions won the battle at the breakdown which I thought was largely because the Lions backrowers, particularly Sam Warburton, were working harder and more effectively than their Wallaby counterparts.

As the Lions forwards tired they became less effective at the breakdown and the Wallabies started to get on top. The Wallabies were helped by having Liam Gill on the bench so they played the last 20 minutes of the match with two very mobile backrowers on the park, one who was reasonably fresh. The Lions were disadvantaged because they effectively had very little in the way of lock cover on the bench forcing both locks to play the full match and they were two of the Lions forwards that were most ineffective in the last 20 minutes.

Overall the Wallabies retained the ball from 93% of their rucks whilst the Lions retained 92% of theirs.

I’ve been through the match and analysed the performance of the Wallaby backrowers in terms of the number of involvements and the effectiveness of those involvements. I measured involvements as carries, tackles attempted and hitting rucks (not standing as a guard or leaning on ruck once the ball was won or lost).

For each involvement I rated the effectiveness as:

As I went through this analysis it became more and more obvious how much work Stephen Moore had done so I included him as another backrower in my analysis.

The results were as follows with the Effective % being a combination of Positive and Neutral involvements:

Moore’s performance was outstanding, topping the number of involvements for the forwards with a higher percentage of positive involvements than any of the starting backrowers (60%). This measure doesn’t include any recognition of his excellent work at the set piece.

Ben Mowen was also very good, both in the lineout and around the park. He was very physical and as a result I rated a high percentage of his involvements as having a positive impact (57%).

Michael Hooper did a lot of work – he kept running and running but he had less of a positive impact, particularly at the breakdown where his lack of size doesn’t help him shift bodies or stay over the ball. Unless he can get into a ruck much earlier than the opposition he is not particularly effective at the ruck. I rated his positive involvements at only 40% which was the lowest of all the backrowers.

Wycliff Palu improved his performance from the first test. His workrate was quite good in the 60 minutes he was on the field with 32 involvements in that time. However, his positive involvements were only 47% which is not enough from an impact player.

Gill had 22 involvements in his 20 minutes and had a slightly higher impact percentage than Moore (64%). His return was what you’d want from a replacement – to make a positive impact and carry some of the workload for the players continuing on to play the full match.

Despite a good performance from the Wallaby forwards I won’t be surprised if Gill makes way for George Smith this week. Robbie Deans may be quite keen to have Smith on the field to end the match with his experience and leadership. That would make Gill very unlucky.