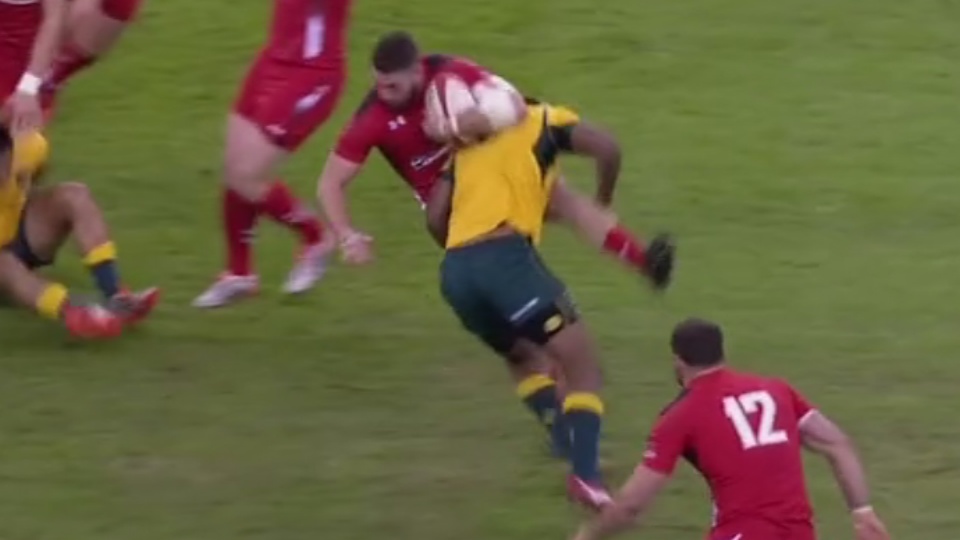 It might seem strange to focus on defence in such an open and exciting game but for any team wanting to win the World Cup defence is key, and the Wallabies seem to be developing an intelligent adaptable system.

Importantly the system allows individuals to make decisions based on outcome rather than “Will I make the tackle?”.

That point is important.

At elite level the made/missed stat is becoming less important. Of course it’s a useful workhorse-like stat. But England, Ireland and quite a few others base the bulk of their analysis on positive or negative outcomes.

For example if the missed tackle drives the attacker back to the cover defence, makes the attacker make a bad decision etc… it’s deemed a positive outcome. That’s why when we see Christian Leali’ifano shoot out of the line and miss his tackle on George North it’s not a problem.

The aim of this shooting is to make the defender turn back in, and shut down the overlap. Both Leali’ifano and Michael Hooper carry it out well.

What I really like is that the system seems to adapt to the scenario unfolding in front of the team. That empowers the individual to assess the situation and decide the appropriate defensive response. For example they will happily cede ground to isolate attackers when the ball is moved wide, but when confronted by punch groups they resort to getting their tackle line up quickly.

There is too much to put in a video, so I’ve focused on the shooters and the line speed of the Australian team. The first three examples demonstrate the system, but also highlight how individual errors impact on it, whereas the fourth illustrates what happens when the system is applied effectively as a unit.

You should also keep an eye out for the following:

It’s early days though and while they have a long way to go the signs are very promising going forwards. The system is obviously evolving week by week, and it’s good that it adapted as the game went on, and from being slightly porous in the first half it locked the Welsh all but out in the second half when Australia took to the field with an obvious determination to put a stop to the Welsh attack.