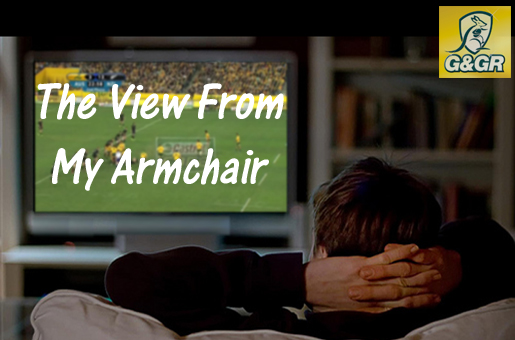 On Friday night against the Waratahs the Rebels were clearly the better team in the first half. Michael Cheika said in his half-time interview that he’d basically told his players they couldn’t play at the pace of the game and would have to set the pace — and that meant they had to lift the pace.

He obviously found the right switch because the Waratahs looked a different team in the second half playing attacking rugby without taking unnecessary risks. Apart from lifting the pace of the match I thought that the key difference was that support runners started running closer to the ball carrier which meant that when the ball carrier took the ball to the line he had options to offload the ball to rather than just shifting the ball wider by passing before taking on the defensive line.

Matt Rowley wrote an article on this very subject yesterday and included some video so take a look.

Playing an offloading game reduces your reliance on controlling the breakdown – effectively you keep the ball out of the breakdown as often as possible by moving it on before the opposition arrives. However, I still see problems on the horizon for the Waratahs at the breakdown: I don’t think Dave Dennis or Wycliff Palu have been getting to the breakdown quickly enough and that places too much of a burden on Michael Hooper, who has himself been quieter than he was last year for the Brumbies. If that pattern continues I believe teams that attack the breakdown by committing numbers quickly (like the Brumbies) will thwart the Waratahs’ attacking plan. It’ll be interesting to see whether the Waratahs have a change in their game plan this weekend when they take on the Brumbies.

The Rebels’ attack had limited options to penetrate the defensive line and they looked to be playing a retention game, just going through a number of phases waiting for something to happen. In round 1 the Rebels completed 86% of their possessions within four phases, which climbed to 89% in round 2 but fell dramatically to 69% in round 3. When retaining the ball for long periods didn’t work, particularly in the second half, Kurtley Beale and James O’Connor introduced the chip kick which didn’t improve their attack at all.

With both Beale and O’Connor in the team you’d expect the Rebels’ attack to really threaten opposition defences but it hasn’t appeared to click yet this season, apart from breaks created by individual brilliance. I see that with Beale out of the side due to injury O’Connor has been selected at number 10 this week against the Reds, which I think is his best position. Let’s see if the attacking pattern looks a little more dynamic this week.

The Force competed much better this week against the Bulls but still look like a club that hasn’t worked out the right combination of players and as a result they looked a little disjointed.

Their wide defence was ordinary and their defence of the Bulls’ driving maul was woeful.

Sias Ebersohn was an improvement at number 10, although his kicking in general play needs to improve. The Force have potential and maybe the week off will give them the time they need to settle on a combination and develop more cohesion.

The Reds came away with the points against the Hurricanes but are certainly still not playing anywhere near their best. In attack they are clearly lacking the threat that Will Genia poses for the opposition and as a result the defence is focussing more attention on Quade Cooper, who isn’t playing badly but isn’t performing at the level we’ve come to expect from him.

The Reds are obviously missing the leadership of Genia and James Horwill and I think they’re also missing Anthony Faingaa to lead the defence. While the Reds scrambled really well in defence over the last two weeks, with Faingaa in the team they look far more composed in defence and without his presence there are a few issues developing. This week those issues were primarily on the right side of the defence, where the Hurricanes achieved a numerical advantage too easily on Dom Shipperley’s wing on a number of occasions.

In attack the Reds look like they are trying to make things happen, rather than being a little more patient and waiting for the opportunities to open up a phase or two later – they seem to be rushing just a little.

The good news for Reds fans is that despite not playing that well over the first three weeks of the competition they are still winning matches and accumulating points. With Genia, Horwill and Faingaa all due back over the next couple of weeks they are well placed to re launch their campaign against the Rebels this week and the Force the following week.