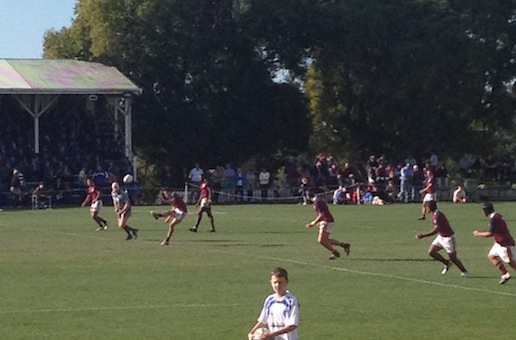 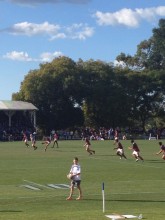 Nudgee College reminded the rest of the GPS competition that they are still the title favourites this year with a comfortable victory over Brisbane State High School on Jack Ross Oval.

The impact of the return of Jack Tuttle to the Nudgee side was evident from the outset as they looked a much more confident outfit from the kick-off. Within the first five minutes of play, a State High error within their own 22 allowed fly-half Paddy James to dummy and slice through the line to put Nudgee up 7-0.

State High looked to have improved within the last few weeks as they showed some great structure with ball in hand, eventually forcing a penalty in front of the posts 30 metres out, they elected to take the points and had immediately cut the lead to 7-3.

Following the kick-off, State High kicked from their own 22 but failed to find touch, two passes later the ball was in the hands of No. 11 Charles Tenakanai who palmed three would-be defenders to go over in the corner. Nudgee lead 14-3.

State High regained the ball after a nice short kick-off but failed to gain any momentum, shifting the ball side to side for 6 or 7 phases before coughing the ball up. This left a massive hole for No. 1 Francois Postale as the ball spilled out the side of the ruck, with the big man showing some great pace before finally being tracked down. Two phases later a wonderful cut-out pass from James put outside centre Jamie Deshon in for Nudgee’s third try. Tuttle failed to convert and the score remained at 19-3.

Nudgee were cruising at this point, making it look like an opposed team run and simply doing as they pleased right across the field. Only 4 phases following the kick-off, some nice hands from the Nudgee backs put No. 14 Riley Brennan in with a clear run to the line, increasing the lead to 24-3.

To High’s credit, they did not put their heads down and kept pushing for opportuinites with ball in hand. The fly-half Logan Tibbets showing some great feet to stand up some questionable defense from the Nudgee forwards and break the line, with the ensuing pick and drive resulting in State High’s first try. The lead had been cut to 24-8 which it would remain until the break.

The second half began with State High showing some improvement, grabbing points at any chance they could. They were no match for the firepower that Nudgee had on offer, a wayward kick landing in Jack Tuttle’s hands who went straight up the middle from 50 metres out to score a great try, increasing the lead to 31-11.

Nudgee continued to hand out penalties which they may come to regret, with the stronger sides making them pay. State High converted a chance off of a line-out from a penalty with Tibbets putting inside centre Josh L’Hota in to score. Cutting the Nudgee lead to 31-16.

A nice kick-off from Tuttle saw Nudgee reclaim the ball and three phases later the ball again was in the hands of the star inside centre who scored his second try after some woeful defense by the High outside backs, leaving the score at 36-16.

Paddy James again showed his skills with a strong run through the heart of the State High defense and then a swift pass to beat the full-back and increase the Nudgee lead to 43-16.

Nudgee appeared to switch off at this stage, bringing Jack Tuttle off and not working nearly as hard. Turning the ball over immediately following the restart and conceding a try after some great pace was shown by replacement winger Ollie Cooper. Another High try quickly followed after a nice little grubber from the full-back to again cut the Nudgee lead with approximately 5 minutes to go, 43-28.

Nudgee were never in doubt and had the final say, scoring with only two minutes remaining and leaving the final score at NC 48 – BSHS 28.