This week we take a look at European rugby, try and understand the rule book and see how the Aussie teams are travelling after round 9.

This weekend saw the semi-finals of the European Challenge Cup and Champions Cup.

In the first Challenge Cup semi-final Montpellier, with a plethora of ex-super rugby stars in action, beat the Newport Gwent Dragons to make the final. They scored 1 try compared to the Dragons 2, but penalties made the difference with Demetri Catrakilis kicking four.

In the other semi James Horwill’s Harlequins easily beat Grenoble 30-6. The match was marred by what appeared to be a kick aimed at Grenoble hooker Arnaud Heguy’s head by Joe Marler. Marler had just returned from a two week ban for the now infamous “Gypsy-boy” comment. Marler has been cited for the incident.

In the first Champions Cup semi-final Saracens took out Wasps 24 – 17. Despite scoring one more try than their opposition, Wasps were let down by the number of penalties, committing nearly twice as many as Saracens. Owen Farrell kicked four penalties to ensure a Saracens win. Owen Farrell has been cited after a dangerous tackle on Dan Robson. Robson had to be stretchered off after the clash.

In the other semi, Racing 92 took on Leicester Tigers. Three penalties and a conversion from Dan Carter helped Racing 92 to a 19-16 win, setting up a replay of last year’s quarter final which saw Saracens knock Racing out of the championship.

The Cup final between Saracens and Racing 92 will be held at Grand Stade de Lyon, May 14th at 17:45 local time. This puts it at 1:45 am AEST on Sunday May 15th. For those with Foxtel, let’s hope that BeIN Sports starts at Midnight on the 15th so we can watch the match live!

Surely I wasn’t the only one left confused by the call from Craig Joubert during the Chiefs win over the Hurricanes when scrums went uncontested. Well that part isn’t new, we have seen it quite a few times already this year, but the Chiefs only being allowed to have 14 men on the field? Hadn’t seen that one called before!

This appears to be the relevant ruling.

At the 38 minute mark Atu Moli was replaced by Siate Tokolahi. Then towards the end of the match Tokolahi went off injured. The ruling was that no one in the match day 23 was listed to play on the same side of the scrum, Moli was already off presumably injured, so therefore scrums go uncontested. But then law 3.6 (d) kicked in. Tokolahi’s departure caused the uncontested scrums, therefore he cannot be replaced leaving the Chiefs with 14 men. 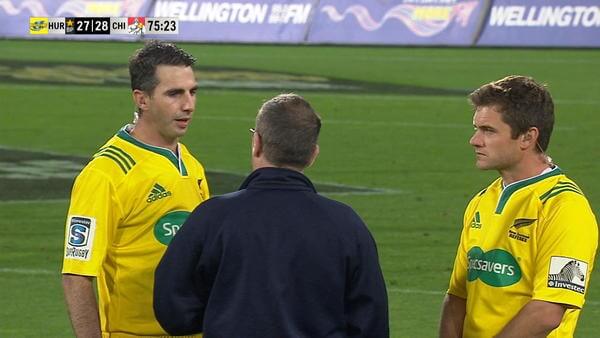 Discussing uncontested scrums and the laws of the game

Now I know that many props can play both tight and loose head, but apparently it all comes down to what they are listed as on the team sheet. In this instance, as with the Highlanders a few weeks ago, the player that could have come on the field had recently played on the other side of the scrum, but apparently was not listed to do so on match day so it wasn’t allowed.

According to the law it was the correct ruling. So my question is why is this the first time this season we have seen it with the number of times scrums have been uncontested? And is it simply coincidental that the team going to uncontested are usually the team that is getting well and truly dominated in the scrums?

With this weekend being the ANZAC Day weekend it was a chance for teams from Australia and New Zealand to commemorate the special day. At games held in both countries there was a Last Post Ceremony and a moments silence. Grounds in New Zealand had poppies painted on the field, while the Brumbies continued the tradition of wearing a commemorative jersey. I have to admit, I was hoping the other Australian franchises would wear a special jersey, or at least add something, as the Reds did last year with the Rising Sun logo embroidered on the jersey. The only other team I noticed, apart from the Brumbies, was the Hurricanes with a poppy and “Rugby Remembers” on the front of their jersey.

This weekend would have been the perfect opportunity for SANZAR to schedule five Australia/New Zealand derbies. Now I’m sure that the scheduling of the draw, especially with this new conference system is no easy task. But surely they could have more than one cross Tasman clash on the ANZAC weekend? Round 16 has four scheduled clashes so we know it’s possible. If any weekend warrants derbies between Australian and New Zealand teams, then this would be it.

Clarification of when a try is a try … please!

As we saw in the round 4 match between the Stormers and Brumbies in Cape Town, the definition of a try seems to be a bit murky when it comes to the ball potentially being knocked on. This weekend it raised its head again during the Hurricanes v Chiefs match when the Chiefs player Tamanivalu looked to have knocked the ball on over the line. After consulting with the TMO the try was awarded due to there being “no clear and obvious separation”. The commentators disagreed saying he was not in control of the ball when it hits the ground.

Some argue there must be control, some say downward pressure and some say there simply must be no separation between hand and ball. So when is it a try and when is it a knock on?

See video of the ‘try’ here

Law 22.1
There are two ways a player can ground the ball:

(a) Player touches the ground with the ball. A player grounds the ball by holding the ball and touching the ground with it, in in-goal. ‘Holding’ means holding in the hand or hands, or in the arm or arms. No downward pressure is required

So at least we can definitely rule out the need for downward pressure unless the ball is already on the ground, and at no point does it actually mention the player must be in control of the ball. But if one or two fingers are in contact with the ball does this constitute “holding the ball”?

One thing is for sure, referees need to be clear and consistent with their interpretation of the rule and if they could let the rest of us, including commentators, know that would be great!

Well another round is run and done and it’s with mixed bag of results.

Rebels B+: The new conference leaders after getting a win against the lower placed Cheetahs after a good day out at the beach. They are the king of their sandbox at the moment being able to get the result needed but with a lot still to work on. There were some good high skill moments mixed in to a pretty good performance, and the effort by the players is making sure that what they are lacking in execution at times is being made up by enthusiasm. They are well placed but from round 12 onward we will see if the Rebels are the real deal or just playing beach footy. With the Brumbies, Chiefs, Stormers, Crusaders and the unpredictable Reds to play in their last 6 games there is little margin for error and they need to avoid any rips at their beach or they will be dragged down and be reliant on other teams throwing them a life line.

Force D-: It’s starting to become pollution for my eyes. Every time they show signs of hope they seem to want to come out in the next game or two and shatter any optimism we have managed to muster for them. For about the first 20 minutes they sort of looked ok; for a team armed with a wooden spoon. But then they hit the cliff; the small amount of hope and optimism they have is easily shattered and it turns once the scoreboard is against them. Falling off tackles, little to no defence, kicking the ball away relentlessly and it’s just becoming awkward to watch. Like a dumb YouTube video, you know its not going to end well but you watch it only to find out how badly. I am declaring that its time! Forget Western Sydney, the Force need to move in with the Rebels and spend some time at the beach! At least then they can have fun kicking sand in their own face.

Tahs C+ : Harsh you say. Well, the Tahs did look good after grinding out the first 20 minutes before getting there groove on. They are starting to get some cohesion and drive, there are combinations staring to develop and stick, and the new blood seems to have invigorated them. Their hard work is starting to pay off, and although the season is in the balance its still not over. The Tahs may just be mirroring the old Crusaders way and make there run late but hard. So why mark them so low? Let’s get some balance here, it was against the Force who at the moment couldn’t beat themselves up. The sounding board to test if the Force game was the turning point is to overcome the Stormers. If they meet that challenge they then have two games at home to tune up ready to face the terror of playing both the Chiefs and Crusaders.

Reds B+ : Its always tough playing the Saffas at home, and the Reds so far have nothing to be ashamed of. They are improving week to week and really starting to give teams a hard time. They have turned the corner quickly and on current form I can’t help but wonder how they would be travelling if the coaching changes were made preseason. The old hands have stood up and are leading by example and new blood is getting there. McIntyre seem to be going ok considering as a rookie, it hard enough in your first season, but to have worked through the amount of changes the Reds have undergone in the last few months he still can’t be settled or confident in his patterns and combinations. The Reds are going to be a menace for the rest of the season, and the Aussie conference may come down to how well they go against the Brumbies, and then in the final round against the touring beach boys!

Brumbies D- : What the hell was that? It was bad; really, really bad. Where do you start with a performance like that? It not like we didn’t see it coming. The Chiefs game I think we could all accept that the Brumbies were off their game and the Chiefs were red hot. It was a good wakeup call and reality check. But this abomination was horrendous. Sorry Bernie, but attributing the loss to “individuals” making errors. Really? I am not buying it; it’s not that simple. Every week we watch teams put pressure on the opposition in every way possible, at every opportunity. Why? Because they are trying to force individual errors. The Brumbies have become predictable beasts and in reality the threat of their formidable backline is only on paper. There will be some deep soul searching and a lot of video reviewed in Canberra this week trying to work out what to do. Do you risk major changes or tinker with the current mould. It’s a gamble either way, and I think it will take more than rearranging the deckchairs. It’s the first major “issue” Bernie has had to deal with in his short coaching career so it will be interesting to watch it play out either way.