Hugh Cavill
Welcome to the Tuesday Top 10, where I mindlessly rant about ten subjects from the previous weeks.

10. When I tipped the Brumbies to be finals candidates people laughed at me. At least that’s how I remember it anyway. OK… maybe not. But people should have known that when I said they would be ‘wooden spooners’ I secretly meant ‘conference winners’. In scoring five tries against the Bulls at Loftus they proved they are not just an early season flash-in-the-pan. Sure, three of those tries were scored after the Bulls had it won, but it is an impressive feat nonetheless. They tackled recklessly, they attacked indiscriminately and their set-pieces stood up to the challenge. To put it bluntly- I am now cheering for them to win the Aussie conference. 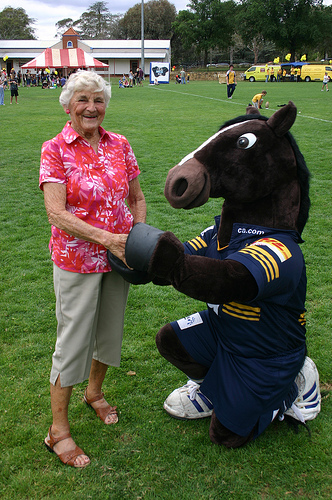 Even Brumby Jack is making strong claims for the mascot position

9. So which Brumbies will we see in gold this season? Less than you might think. The Brumbies success has been built on a 15-man effort, with every player adding something slightly different. The big improvers are still probably a year away from higher honours- guys like Jesse Mogg, Andrew Smith, Henry Speight, Sam Carter, Joe Tomane, Robbie Coleman and Dan Palmer. Three guys who I expect to make their debuts in June, though, are Michael Hooper, Christian Lealiifano and Nic White. All three have been outstanding and should get a chance to show their wares against the Welsh.

8. One last thing about the Brumbies on the weekend (I’m on a roll here). It would be tempting to say the call by Marius Jonker to award a try to the Bulls after a clear knock-on from Morne Steyn cost the Brumbies the game. This is not the case. Sure it was a shocker of a call, but Nic White made an under 7s error when he decided not to play the whistle. And then Jesse Mogg missed a regulation tackle at the back. But more than that the Bulls shut up shop after that point, and if the try was not awarded I doubt if this would have been the case. Hypotheticals, hypotheticals…

Whatever happened to backing yourself to take the opposing backline mano-e-mano? AAC, an experienced international winger, is getting hypothermia out on the wing. Compare that to the Brumbies, who utilise a range of tactics in attack- runners one-off the ruck, pick-and-go’s, forward runners in midfield, as well as wider backline plays. The Tahs backline will have one or two cracks, then say ‘fuck it, give it to the forwards’. When was the last time Berrick tried an inside ball to an angled runner in midfield? When was the last time you saw a backline move that had more than two runners in motion? Because I can tell you when the last one from the Brumbies was- Saturday. It was simple but well executed and guess what? They scored. Will Genia... all at sea without Quade

6. The Reds battled admirably against the Stormers, but the horse has bolted for them in 2012. They may win the Aussie conference (though I doubt they will), but they aren’t deserving of anything more than a mid-table finish. Sure they have been ravaged by injuries in the backline, but that only tells half the story. Frankly it just looks like they proved everything they needed to last season, and have nothing more to play for. Their forward pack is almost identical to the one that ran on in the 2011 final, yet is being bested on a regular basis in 2012. I’m not sure what the solution is, although the return of Quade will certainly help. Will Genia is at sea without him.

5. The Rebels didn’t play too badly on Saturday night. At 10-0 after six minutes it looked like it was going to be Canberra all over again. But to their credit they stuck to the task, even though they never really looked like winning. Forget JOC and Kurtley, the real heroes of the Rebels are the grafters in the forward pack. Ged Robinson is probably the best foreign player ever to play for an Aussie Super Rugby side. And yet hardly anyone knows who he is. Hugh Pyle and Luke Jones are stars of the future. Gareth Delve and Jarrod Saffy would be revelations in other sides.

4. The competition contenders are have now emerged. In my mind only four sides can win it- the Stormers, Bulls, Chiefs and Crusaders. All have the complete games needed to get to the final, and I am officially tipping the Stormers to beat the Chiefs in a tight one in the Republic to take the whole shebang. The Crusaders are just starting to hit their straps, and surprise surprise it happens the week before they are drawn to play the Waratahs.

Woody Graham preparing to ride off into the sunset...

3. My thoughts on the Woody Graham saga? I don’t think the decision by the QRU to appoint Graham was a bad one, though I do question the timing. It is clear that mid-season announcements of departures by coaches are treated differently to those of players. But it is a messy issue and I don’t know if there is a right way to do it. Does Graham lie about his intentions until the end of the season, leaving him prone to a leak from the QRU? Does the QRU wait until the end of the season to approach Graham, who may have already recommitted to the Force for the last two years of his contract? The debate on the forum has been done to death so I don’t particularly want to heat it up back here, just to say I have sympathy for all parties.

2. Parramatta and Penrith need to stay in the Shute Shield. We can’t afford to simply abandon the game in the Western Suburbs of Sydney, and the proposed 8-team competition must not be allowed to go ahead. Both sides are still competitive, and to lose them from the comp would be a sign of surrender to the forces of League, Soccer and AFL. Not to mention definite proof of the elitist, selfish nature of the top Sydney clubs. You know who you are.

1. I am just as dismissive of SnapShift as most on this site. And now the FoxSports guys are in on the gag too. But to joke about it while JOC was lying on the turf with what turned out to be a lacerated liver? Come on guys, even I think that is too far.

Have I missed anything? What do you think?