The Scrum – It’s Neglected, Not Broken!

The Scrum – It’s Neglected, Not Broken!

Here’s the first thing you need to know about the scrum: it’s not broken! It’s the same scrum. We all played with this

So why is this scrum falling over? 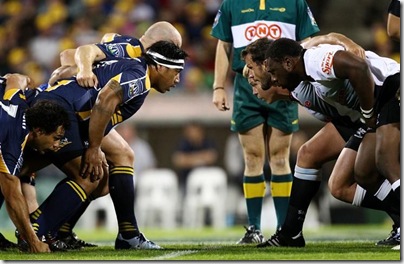 How far apart should we be?

The front rows crouch and using their outside arms, each prop touches the point of the opposing prop’s outside shoulder. It couldn’t be clearer! It’s not touching fingertips or arms. It’s the shoulders that they must touch.

Stationary and parallel. Until the ball leaves the scrum half’s hands, the scrum must be
stationary and the middle line must be parallel to the goal lines. A team must not shove the
scrum away from the mark before the ball is thrown in.

Both props must grip on the back or the side of their opponents’ jersey. And if they get it wrong they can change it to get it right!

Here is what I think is happening to our scrum now. Our officials have become obsessed with the chant and not with the laws around the chant. They are not generally checking that the touch is on the shoulder. This means they are not policing the distance the front rows are apart!

They are standing five metres from the scrum to deliver the chant. This means they are not policing the binds of the front rowers!

And they are allowing halfbacks to feed the scrum on the hit. This means they are ignoring the stable scrum law.

It seems to me that without changing one single law, and just by following the ones already created, we can come up with a structure that works. How do we know it will work? Well, it worked before. I was playing when the “crouch, touch, engage” chant was introduced. It worked. It worked because of the way the referees policed it.

If I were the referees’ boss this is how I would instruct my guys to set up a scrum:

A question to all you 40-, 50-, 60- and 70-year-old rugby players: do parts of this sound familiar? If yes, that’s because parts of it are. Somewhere along the line our officialdom, not for the first time, moved away from something that worked. We will never know why, but that doesn’t mean we can’t say it’s not working and move back to something that does. That’s what we did with the ruck, so why can’t we do it with the scrum?

The only hindrance to my theory is another law I found while researching this article:

I believe this has been a law for quite a while. Some of my Green and Gold Rugby colleague would certainly have some knowledge of the history of this law. But it seems to be a contradiction of the law that requires a stable scrum. For my system to work, Law 20.5 would have to be interpreted differently. We all know that this is not beyond our referees.

I have not mentioned individual players. Players come and go; the scrum does not. I have not mentioned hip and shoulder position. No matter what laws and interpretations apply, this issue and many others remain. I have written this piece in the hope of starting a discussion that leads to change. We fixed the lineout. We appear to be fixing the ruck. Now we can fix the scrum.

Could be before my time. Image via Wikipedia

And there was one… Rebels v. Highlanders Review
Reds v. Waratahs: Game Plans