I’ve been doing this a quarter of a year Pagers. In that time I feel like we’ve really gotten to know our players in a whole new way: Luke Jones’ questionable hygiene,Kurtle y’s Kwest to make the drivers of the world more responsible, Quade’s body confidence, and Drew & Adam’s grooming choices. But we always want more. And today, Social Pagers, thanks to our awesome Super Rugby Players, I present… dicks, pricks, and pink bits!  (Hi Mum – you must be so proud!) 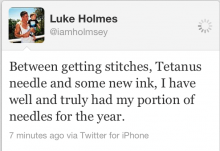 Pricks (the needle-kind: I’m sure young Luke is a lovely chap!)

and pink bits (if this picture looks as questionable to you as it did to me, I encourage you to have a closer look at the image)

Each week leading into the mid-season break we’re going to have a look at a franchise’s twitter performance  in both quality of player bio, and Klouchebag score (Waratahs, we’ll do you last so you have time to improve). The Klouchebag score is a highly scientific way of measuring douche-baggery on twitter. It’s scored on four elements:

Because they have been awesome for the Social Pages over many weeks, we’re starting with the Melbourne Rebels. Please note that although I have done this for EVERY player on twitter in each team, I’m only using the highlights and lowlights. 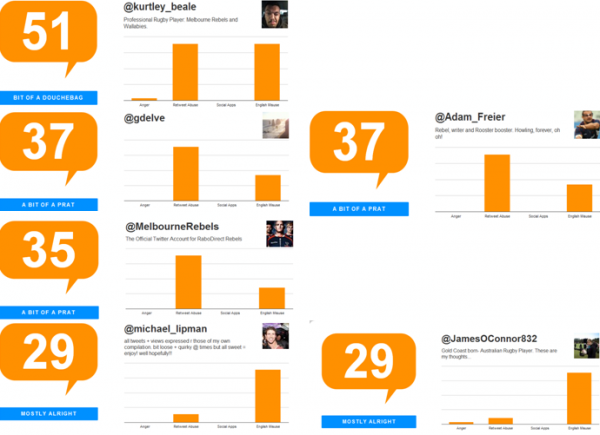 In the coming weeks you’ll see how amazingly low all the Klouchebag scores are for the Rebels. With a maximum score of 51 out of 100,  and a team score of 35, they are an excellent tweeting side.

English misuse is by far their greatest challenge, but what did we expect? Some re-tweeting practices skewed some scores higher also. But although these factors are the major contributors to scores, these scores are very low compared with other franchises. Actually, they’re low compared to the Klouchebag scores for us at G&GR.

Bios: Well done to Gareth Delve for acknowledging the esteem we hold him in. For recognising that the awe he inspires in all who are fortunate enough to witness his actions, both on- and off-field field, for the Rebels, needs no words. Indeed, no words would be enough: the most eloquent poetry and elegant prose could only ever be a merely pale reflection of the sentiments of all rugby fans who have watched him smash blokes over the past 2 seasons.

My own personal favourite is @FakeLachlanMitc, who wins because he calls himself fake even though he’s the Real Lachlan Mitchell, and if he took off the “fake” he’d have room for the rest of his last name in his twitter handle, his bio is awesome, and his Klouchebag score is the lowest score of any real player in any franchise. (@RockydaVinci is 8, but he’s more than just a player, he’s an icon).

Honourable mentions go to @L_Weeks for “Rock Solid. The People’s Champ” and @Adam_Byrnes for the much more blatant follower-seeking, and let’s be honest, creepy  “massive @onedirection fan! #onedirection #yolo”.

Homework: we need to work on a bio for KB, because as you can see above, it doesn’t really say much about him. Your homework for this week Pagers is to suggest bios for KB. We’ll make sure your suggestions get to the right people.

I’m not gonna lie to you. I’m divistated after Kieran Read’s ifforts last week. Pus poor performance really (and Kia Ora to both of my remaining Kiwi readers!). Many people have talked up this week’s player over the past few weeks. Certainly his on-field exploits justify the man-love he’s been getting, and no one has a bad word to say about him off the field either. Well, that can all change this week. Gerrard – a piss-poor performance like the one we saw from that cheating Kiwi last week (surely the All Blacks fan stopped reading when I made fun of their accent? If not, don’t complain about me calling him a cheat- you had your chance to stop reading!)  will certainly not be tolerated.

Admittedly, my powers to exact retribution aren’t great. Actually, it’s probably a fairly toothless threat. So let’s focus on what you could win: 16 from 16 gets you a magnificent laminated certificate commemorating your achievement that you can hang on your fridge. All 16 across one or two answers will get you a YouTube tribute and a cheap, but well-intentioned, trophy. And the thanks of a grateful little blog post. 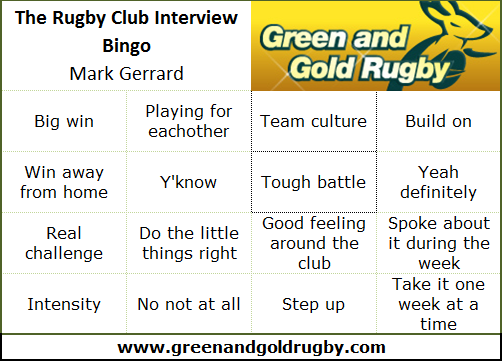