The Queensland Reds U20s have started 2017’s Super Rugby U20s championship with a bang, disposing of the visiting Melbourne Rebels U20s 30-13 on a 31 degree scorcher at Brothers Rugby Club in Brisbane.

The Reds exploded out of the gates, piling on 34-pts in the first half with tries to Liam Wright, Sam Edwards and Harry Hockings and a perfect 5/5 goal kicking display from scrumhalf Harry Nucifora. 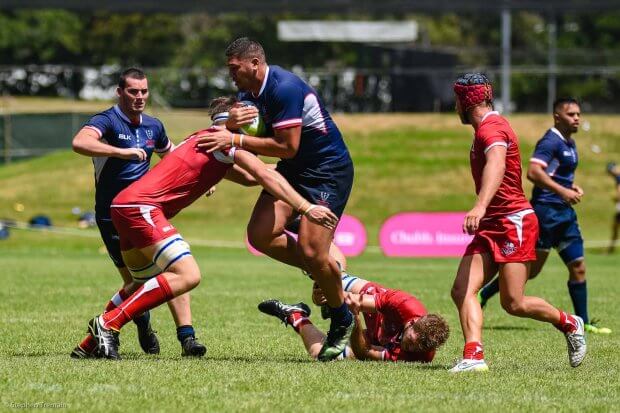 The monster Rebels pack were tamed

“It was solid,” Thorn said. “Kicking on at 12:00pm is a pretty tough time to play footy and the guys competed hard, but it’s just a win.

“What we’ll work on this week is that there were a lot of errors, we had a few penalties against us, but it’s a start. Hopefully we can address a few things and improve.”

The Rebels were struck by injury early as No.8 Tuaina Tualima was carried off on a stretcher in the first collision of the match.

Scrumhalf Harrison Goddard kicked a penalty from the spot when play resumed in the first minute.

Both sides showed off a dominating brand of defence that continued to frustrate ballcarriers but Goddard’s kicking game applied pressure of it’s own in return.

Sharpshooter Australian U20s halfback Harry Nucifora knocked over their first penalty and then a second to take the Queensland U20s to a 20-10 lead in the 17th minute. 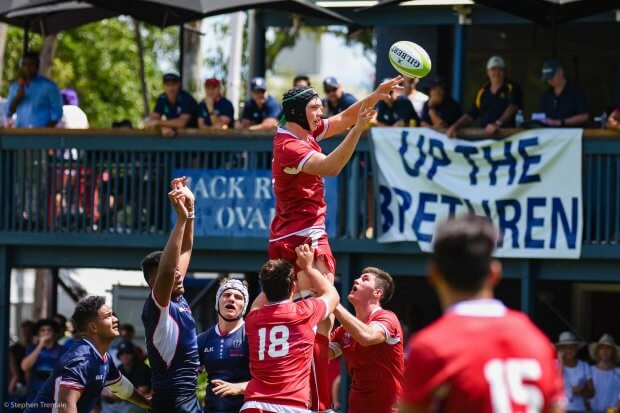 Winger Sam Edwards put another seven-points distance between his Reds and the trailing Rebels with a 60m intercept try in the 27th minute.

A nine-minute stalemate was ended by Hockings with a powerful pick-and-drive try that belied the 2.0m+ lock’s slight frame.

A chip-shot penalty to Melbourne scrumhalf Goddard on half-time sent the Queensland Reds U20s to the sheds ahead 34-13.

The Reds assault continued in the second half as prop Harry Hoopert knocked on in the act of scoring.

A significant head clash between Queensland lock Angus Blyth and his tackler Esei Haangana forced a substitution for the former in the 53rd minute. 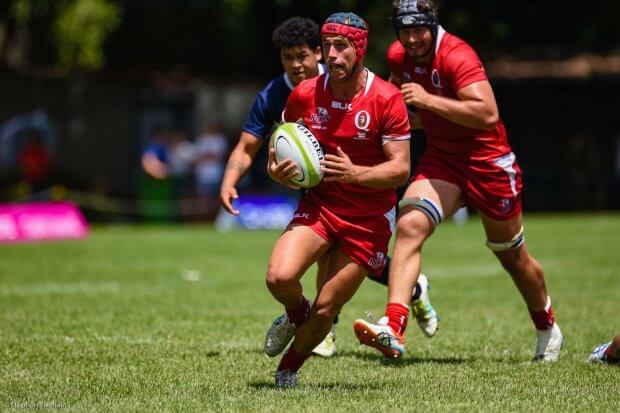 Will Eadie was yellow-carded in the 64th minute for a potentially try-saving intentional knock-down.

Emboldened, the Rebels stretched the field only to be denied in a last-gasp try-saver.

The try-savers kept coming from the Queensland Reds as flyhalf Hamish Stewart hunted down and stopped fullback Oisin Clarken just millimetres from the line before another knock-on cost the Rebels the ball.

No.8 Angus Scott-Young was instrumental in carrying the Reds upfield, forcing a yellow-card upon Rebels hooker Callum Kent for another professional foul on one strong carry.

Stewart kicked the goal from short-range, carrying the Reds into a 24-pt lead, 37-13.

To the laughter of the assembled Brothers crowd, busily chanting “We. Are. Red!”, 2016 Australian Schoolboy prop Lloyd Gorman spilled a certain try under the posts to all but end the match.

Hamish Stewart was named man of the match after a strong performance, with No.8 Angus Scott-Young and loosehead prop Harry Hoopert also receiving commendation.

All The 2017 Super Rugby Previews
Waratahs vs Force