After a week off, the Green & Gold Rugby Power Rankings are back. It’s been a big couple of weeks with nail biting losses for the Force and Rebels and a spiteful encounter in South Africa between the Sharks and the Chiefs just some of the highlights. Round 6 concluded with a mammoth battle between the Waratahs and Brumbies in Sydney.

1. Hurricanes (no change) – the ‘Canes are the only undefeated team in the competition and have accounted for the Blues and the Highlanders over the last two weeks. Neither game has been a walkover but the men from Wellington are getting the job done. Their backline is humming and they’ll be expected to notch up a sixth straight win against the Rebels at home on Friday.

2. Chiefs (up 2 places) – the Waikato boys end their trip to South Africa with a win against the Stormers and a one point loss to the Sharks. With two tough away games out of the way they’re sitting nicely at 4 and 2. They’ll be glad to be back in Hamilton against a Cheetahs team that got demolished by the Crusaders last week. Unless they are seriously fatigued from their trip to South Africa they should notch up another win.

3. Brumbies (no change) – after dusting up the Reds and leaving them scoreless, the Brumbies headed to Sydney full of confidence but ran into a Waratahs team that produced their best game of the season. The Brumbies are still runaway leaders of the Aussie conference and playing very well. They’ve lost Tevita Kuridrani for a couple of months and will be glad to have the bye before returning to Canberra to face the Cheetahs in round 8.

4. Stormers (down 2 places) – they lost at home to the Chiefs and then had a bye. They’re off on tour now and face the Highlanders in Dunedin this weekend. They then continue their tour against the Hurricanes, Waratahs and Force. This next month will make or break their season and I’m predicting it will break it. They aren’t scoring bonus points and will need a lot of wins if they want to make the finals. 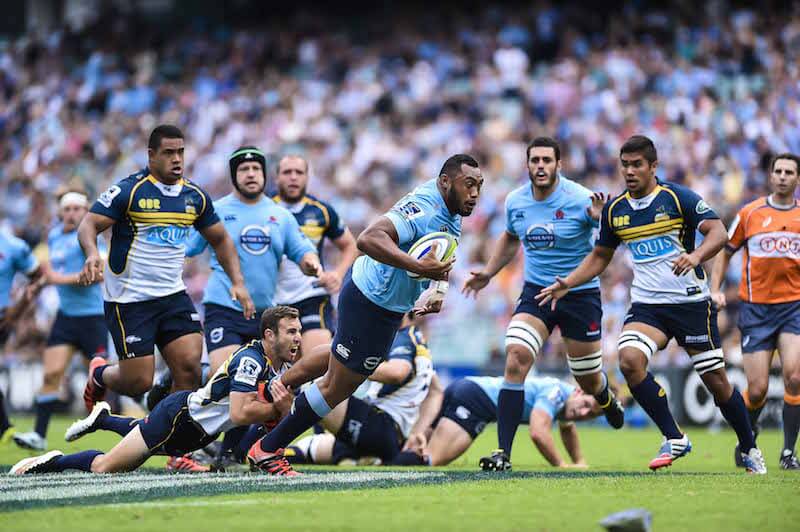 Sekope Kepu has been in great form for the Waratahs. Strong running and good scrummaging have been a feature.

5. Waratahs (no change) – after letting an early lead slip in Dunedin, the Waratahs produced easily their best performance of the season to beat the Brumbies in Sydney. Their physicality is reminiscent of last year and the execution is starting to come together. They face the winless Blues in Sydney on Saturday night and will be looking to notch a win before their second bye.

6. Crusaders (up 5 places) – they haven’t faced the toughest opposition in the last two weeks, but they’ve produced convincing results. A close game at half time against the Lions was quickly to put to bed in the second half and then they repeated the dose against the Cheetahs. As usual, the Crusaders are heating up and deserve to be taken seriously. They’re off to the Republic to face the Bulls and Sharks. If they can win one of those they’ll be pretty happy with where they’re sitting.

7. Highlanders (no change) – after giving up two early tries they turned on a scintillating period to score 3 tries in 10 minutes and take the game away from the Waratahs in round 5. Things didn’t quite go their way against the Hurricanes but they still came away with a bonus point and are in a solid position. They face the Stormers at home in what will be a key game against a likely rival on the points table.

8. Sharks (up 2 places) – a spiteful contest against the Chiefs saw captain Bismarck du Plessis suspended for four weeks for kicking. That said, the Durban boys came away with a one point victory and stay in the mix. They’ll be looking for another win at home against the Force this weekend but will need to play well. The Force will be smarting from a heartbreaking loss to the Bulls and looking to end their tour on a high note.

9. Bulls (down 3 places) – despite having the bye and beating the Force at home, the Bulls have dropped down the Power Rankings. They were wholly unconvincing against the Force and were lucky to get away with the win almost solely off the boot of Handre Pollard. They face the Crusaders at Loftus this weekend and you’d have to think that they’re about to run into a Crusaders team that is really starting to hit their straps.

10. Lions (up 3 places) – the Lions did it tough against the Crusaders a couple of weeks ago and after being in the game at halftime got blown away in the second half. Last week they stuck with the Rebels in Melbourne and clawed them back as the game wore on. A Lionel Mapoe try in the dying minutes was enough to secure victory for men from Jo’burg. This week they travel to Brisbane and despite a host of Reds stars returning, you’d have to give the Lions a chance.

11. Rebels (down 2 places) – it’s hard not to feel sorry for the Rebels. They’ve been close to the mark in their three recent losses but have lost all three. Some greater composure under pressure and impact in the final minutes will get them there. After an excellent win in Perth against the Force in round 5, it looked all but certain the Rebels would win a second on the trot when the Lions snatched victory in the final minutes. With round 7 opponents, the Hurricanes resting a few key players could the Rebels be in with a chance?

12. Force (no change) – life without Matt Hodgson continues to be tough for the Perth team and they’ve lost their last two in close ones. A fast starting Rebels beat them at home before the Bulls stole the game out from under them last week in Loftus which will have left the Force smarting. It doesn’t get any easier against the Sharks in Durban this weekend.

13. Cheetahs (down 5 places) – after a bright start for the Bloemfontein boys, the wheels are falling off. They have lost their last three matches by a combined margin of 79 points. It doesn’t get any easier as they continue their New Zealand tour against the Chiefs. Will do well to be within 20.

14. Reds (no change) – the Reds were scoreless in a dismal performance against a very strong Brumbies team in Brisbane in round 5 and they would have welcomed a reprieve with the bye in round 6. The week off has given a host of big names time to heal with Cooper, O’Connor, Turner and others all returning this weekend. It’s good to finally see a glimmer of hope for the Reds. They return to Lang Park and will be relishing the match against the Lions. A win would be sorely welcome north of the Tweed.

15. Blues (no change) – the only winless team in the competition will have spent the bye weekend wondering where it all went so wrong. Every game seems to run to a similar script. The Blues score some unbelievable tries but a leaky defence and lack of discipline results in them coming up just short of their opponents. A better for and against than the four teams above them gives you some indication of their losses. They’ll face a pumped up Waratahs in Sydney and they’ll need to produce something good to be competitive.