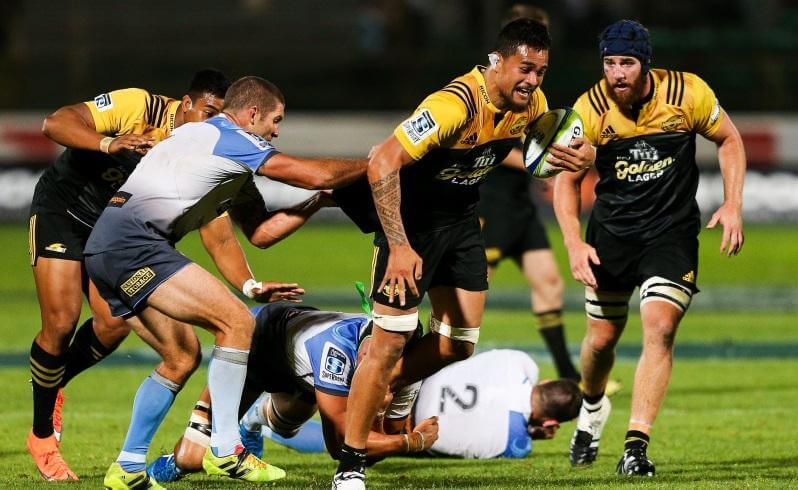 Force's Matt Hodgson "being a menace" against the Hurricanes.
SR Aussie Ruck Analysis – Round 4

Round 4 had all of the Aussie SR teams playing International opponents.

The teams which played off-shore showed significant reductions in Total Ruck Involvements from their average in the opening 3 rounds – Brumbies (-33%), Force (-20%) and Rebels (-18%).  Clearly the strategy was to be more combative against local teams early in the season.  The quality of the rugby certainly suffered.

The Reds played the Blues at Suncorp and maintained their normal ruck work rate.

The Waratahs returned from their Bye with an energenic, youthful Front Row (especially Ta’avao, Roach and Robertson) and increased their Total Ruck Involvements by 30%.

Reductions in Defensive Ruck Involvements (DRIs) was even more pronounced with a switch to maintaining own possession, maintaining a defensive line and being more selective on which rucks to enter.  The Brumbies (-40%) and Force (-50%) showed the biggest reductions in DFI’s.   The Reds and Rebels maintained their normal number of DRIs.  However, the Waratahs’ DRIs reduced by nearly 60%.

Did these changes in strategies regarding Ruck Involvements contribute to the Round 4 results?

The least changes resulted in a Win (Rebels) and a Draw (Reds) and the most changes (Waratahs, Brumbies and Force) resulted in Losses.

The Waratahs’ 26 DRIs – only 9% of Total Ruck Involvements – is the lowest level of DRIs that I’ve encountered in almost 2 years of collecting these statistics.

A similar distribution of Total Ruck Involvements across all Aussie teams.

The Waratahs Back Row was the least involved of the Aussie teams.

The revitalised (as far as work around the park) Waratahs’ Front Row and the Reds and Brumbies Back Rows showed strong involvement in ball retention and support of ball carriers.

Once again the different skill sets and ruck strategies of the Aussie teams are most evident in the spread of DRIs over the player groups.

Waratahs continue to show a fairly even DRI involvement across the player groups.

Rebels Back Row very involved in DRIs helping to keep the Sunwolves to a single TOW.

After Round 4 the Blues and Stormers have the best average Ruck Success rate at 96%.

After Round 4 the Crusaders have the best average Tackle Success rate at 88%.

The Waratahs (Highlanders) and Force (Hurricanes) clearly overwhelmed by the running games of last year’s finalists (at least for a significant portion of their games).

15 HEs per game is about the average in SR.

Waratahs’ HEs in part account for the 0:30 scoreline at half time.

Back Rows dominated the Total Ruck Involvements in Round 4 plus commendable efforts by the sole Prop (Ta’avao) and Lock (Mumm).

The Force’s Matt Hodgson’s solo effort against the Hurricanes was sufficient to keep the Force in contact for the first 57 minutes.   His 46 Total Ruck Involvements were >40 % more than the next highest.  His 17 DRI’s were 36% of the Force’s DRIs.  13 Tackles.  3 TOW.

Michael Hooper’s 3 TOW from only 4 DRIs shows the benefit of selective involvement.

The Reds efforts in the opening 10 minutes indicate that they were well prepared for the game against the Blues.

Mitch Inman’s Total Ruck Involvements were sufficient for him to be ranked amongst the better efforts by Forwards.