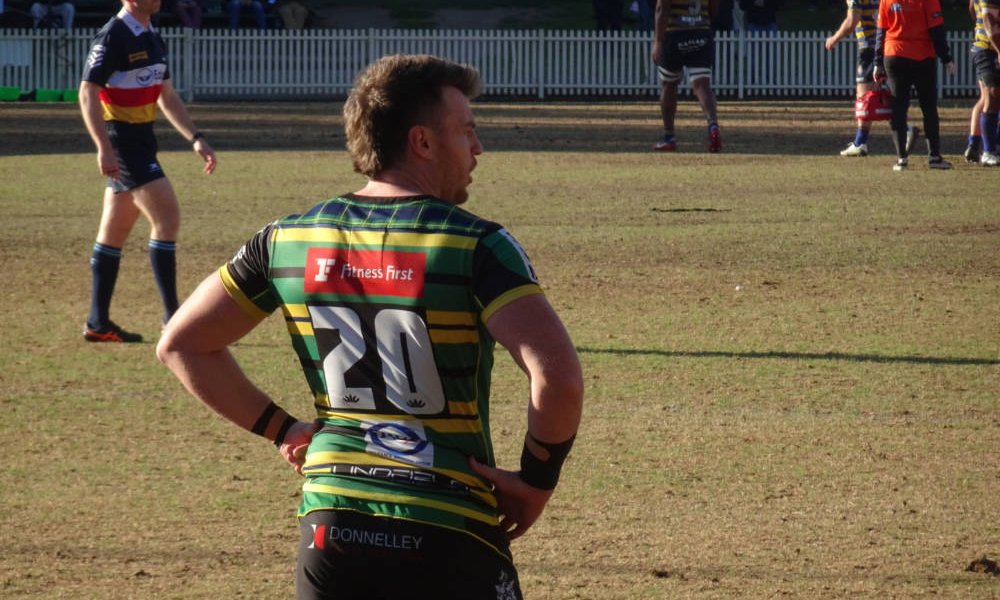 Even though it wasn’t the tv game, Gordon hosting Uni was the match of the round, no doubt. Uni were trounced at home by a resurgent Randwick last week, and Gordon were also smarting after losing the ‘Battle of The North’ at Chatswood. Both looking for a reset with three rounds to go, Gordon started their Round 11 match under huge pressure off the kickoff at the first scrum, knocking it on, and after reset after reset, and penalty after penalty — finally the penalty try and the yellow card came.

Soon after, another score from the Uni hooker to make it a crowd-silencing score of 12-nil. Gordon made their way upfield, and earned a penalty. It looked like three points might not have been enough given the start from Uni, but points was the option given it was a freebie from right in front. Late in the half, Gordon was revived off an uncharacteristic Uni error in their own 22, as a result of what we in the trade call ‘shoveling shit’. Shoveling shit, is making a pass, that when under pressure, simply puts the recipient in an even worse position than you were, often even further behind the gain line. Joey Walton it was with the meat pie, to make it 19-10. Thus it would remain at halftime.

The second half is certainly where the game roared into life and Gordon well outscored Uni, 24 to five, with three tries and a penalty. Unfortunately for me, but fortunately for Gordon all the action was up the other end in Gordon’s clubhouse corner. Jack Dempsey set up one and scored another himself, but Uni struck back after pounding the Gordon tryline with a score in the corner by Henry Clunies-Ross. That put them within reach, and to trail only by seven, 24-31 — a crucial missed conversion. With 15 to go, Rodney Iona stepped up to put Gordon out by more than a score with a clutch kick from 50 out 15 in from touch. It proved the difference, with Uni again in possession and going through the phases, but unable to dent the green wall. The knock-on came with less than 5 on the clock, the scrum came and went, and with some canny treasuring of the pill the game was done. Gordon winners 34 to 24, and kept their top spot on the table, theirs since Round 7.

The race for the minor premiership, and the title itself is truly heating up, with lots of movement at the top of the table, and teams at the top beating, even smashing each other. Randwick, having been undefeated and three points clear at the top of the table after six rounds, came off the boil big time. Given all their wins were against teams now finding themselves in the bottom six, it seemed to be a mirage, even if it was a mirage with a huge points difference of 201. A close loss to Eastwood was followed up by two wallopings from Gordon and then Norths, but then the Wicks showed what they’re made of, turning up to smash Uni, at Uni last weekend 24-42. The oasis was back in sight and so was the title. Last winning the Shute Shield in 2004, this win, for their fans with long memories at least would’ve been something to savour given they were runners-up to Uni from 2008 to 2010.

Norths on the other hand were 3 & 3 and sixth on the ladder after six rounds, but are on a rampaging run home, second on the table after winning their last five. And of those five wins, three of them have come against teams in the top four! Could this be another title win, like 2016 and only their second since 1964?

Another story of the second half of the comp has been Uni’s form since their Round 7 bye, shipping 29 points at home to West Harbour, losing to Easts and now Gordon. Not that a round four loss to Southern Districts at home augured well. But losing last week in a thumping 24 to 42 would’ve been just embarrassing, They certainly looked fired up this week, but it was enough to be able to break down Gordon enough to bring back the good ol’ days of student dominance.

And so we have just two rounds ahead of us until finals time. For the race for the last finals spot, and top spot on the table, it looks to come down to this weekend’s game between Uni and Norths. Warringah looks to be out of the running, six points adrift of Uni. Souths, just three points behind, have games against Manly and West Harbour will need to hope for a Norths triumph, and for wins themselves. Given Uni play the Western Sydney Two Blues in the last round, it may come down to a losing bonus point against Norths. Then again, if it comes down to a tiebreaker, Souths’ much inferior points difference won’t be of use. However before you look for points difference, their win against Uni would put them through on head-to-head.

At the pointy end of the table, it looks Gordon’s for the taking with Penrith away this weekend and Eastwood away the next. Let’s take the assumption that Gordon does get a bonus point win v Penrith. Gordon has a one point ladder advantage as well as an insurmountable points difference, so for Norths to claim top spot they would essentially need to win both games and hope for Gordon to lose to Eastwood. Should Norths lose one, Gordon would need to lose to Eastwood and not get a bonus point, all the while Norths would need to salvage two bonus points.

Unfortunately it looks like no tickets will be available for the match, with their facebook page on monday morning stating: “Due to high demand from SUFC members and in line with COVID-19 restrictions, at this stage there are no GA tickets available. Keep and eye on our website for updates.”. At least this weekend Channel 7 have gotten it right and it is indeed the tv game this week!

Hopefully there will be, but health concerns in this pandemic must win out, especially given Uni will not be playing at their usual ground of Oval No.1. Unfortunate however, as a number of the games in recent weeks have had good attendances and indeed the two last Gordon games sold out!

The three-week finals series will commence on the weekend of October the 17th, with the grand final looking set to be played at BankWest in Parramatta. The NRL grand final is on the week before at ANZ, and with Concord under redevelopment and North Sydney Oval unavailable due to cricket, BankWest should be it.

A long-suffering rugby obsessive, previously famous to my mates for being obsessed enough to be able to name, on demand, a Lions match-day squad. and that was back when they were verifiably bin juice