Running with the Bulls at Loftus Versfeld 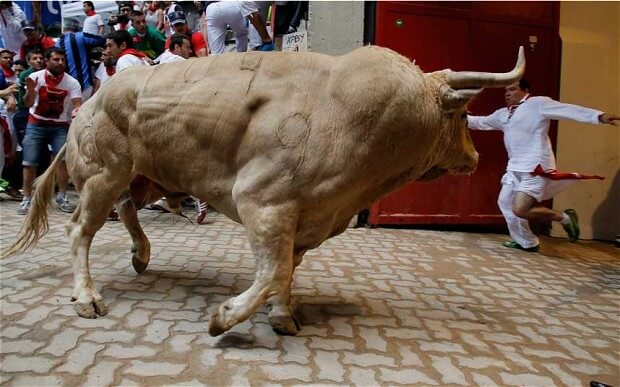 Running with the Bulls at Loftus Versfeld

The Bulls dominated the Rebels in the first half, scoring three tries to zip.  The Rebels were much stronger in the second half, and scored a try early after the break, but could not chase down the margin.

Always nice to see a front-rower get a try.

After 15 minutes, the Rebels had the first chance for points, after the Bulls gave away a penalty within kicking distance.  Sadly, Jack Debreczei missed the kick, and the score remains 7 – 0 to the Bulls.

Due to another trademark “break in transmission” from Pretoria, we didn’t see the footage of Debreczei kick a penalty goal.  We can only assume it was a glorious kick that wowed the huge crowd.  The successful kick reduced the lead to four points; 7 – 3 Bulls.

As the transmission returned, the Bulls were just running in their second try.  From a successful Bulls lineout, Odendaal put in a clever kick that found Jesse Kriel, who ran under the posts to score.  Pollard converted to give the Bulls a 14 – 3 lead.

It was a real grind for the Rebels, who just couldn’t unlock the Bulls defense.  With 34 minutes down, Cottrell had a good break  down the right side,  and looked for support, but just couldn’t connect with Maddocks.  The resulting knock on set up a lovely counter-attack form the Bulls that gained them 80 metres of territory.

From another dominant scrum win, the Bulls based the ball up for a few phases, sucking in a number of Rebel defenders.  With the overlap, the Bulls found space out wide, which allowed Divan Rossouw to score a try.  Pollards converted, and the Bulls led at the break 21 – 3.

Whatever Dave Wessels said to the team at half time worked; the Rebels looked much more energetic after the break.  They played much more patient rugby, and were prepared to work the ball up the field for good field position.  They had much more intensity, higher work rate, and worked better as a team.

They were rewarded five minutes after the break with a try to Ruru.  He collected a lovely pass from Maddocks, and scored next to the posts.  Debreczei made no mistake with the conversion, scores 21 – 10 Bulls.

Ruru toiled hard all day, and was rewarded with a try

The Rebels started to make their chances, and were almost in for another try.  A chase down from Koribete, which forced the Bulls onto the back foot, lifted the whole team.  Somehow the Bulls managed to win the ball back, but it was a big opportunity lost for the Rebels.

Despite their best endeavors, the Rebels just could convert pressure into tries.  After numerous raids, the Rebels elected to kick a penalty, which didn’t quite make the distance.

For the last quarter, the game had all the feel of a solid arm wrestle, but with elements of a slug fest.  Lots of mistakes, followed by lots on injuries on both sides.

After ten minutes of sustained pressured, the Bulls were rewarded with their last try, and a bonus point.  From a Penalty, Andre Warner took a quick-tap and dived over the line.  Pollard added the two points, moving the scores to 28 – 10 Bulls.

The Bulls almost had a fifty try to Libbok, but the try was disallowed due to some obstruction.  In the end, the Bulls finished with a deserved bonus-point winners, 28 – 10.

The try right on half time put the boot in the Rebels, right at a critical time in the match.  Combined with some key injuries, the Rebels would always find it tough to recover from such a big margin.

A number of Bulls players put their hand up for the award, but the standout was Adriaan Strauss.  Scored a try, was involved in a number of full-fiend counter attacks, and was unstoppable with ball in hand.  He finished the day with 7 carries for 38 meters, with a clean break and one try.  His leadership and experience around the field was more valuable.

Dane, Adam, and Jordan will be on Wallaby media watch; all of them picked up injuries.  Koroibete seems to find some confidence in the second half, with the try saver on Gelant a big highlight.  A little more mongrel from Hardwick was also nice to see, but he sometimes needs to keep a lid on it.

Crowd: excited, by the look of things.