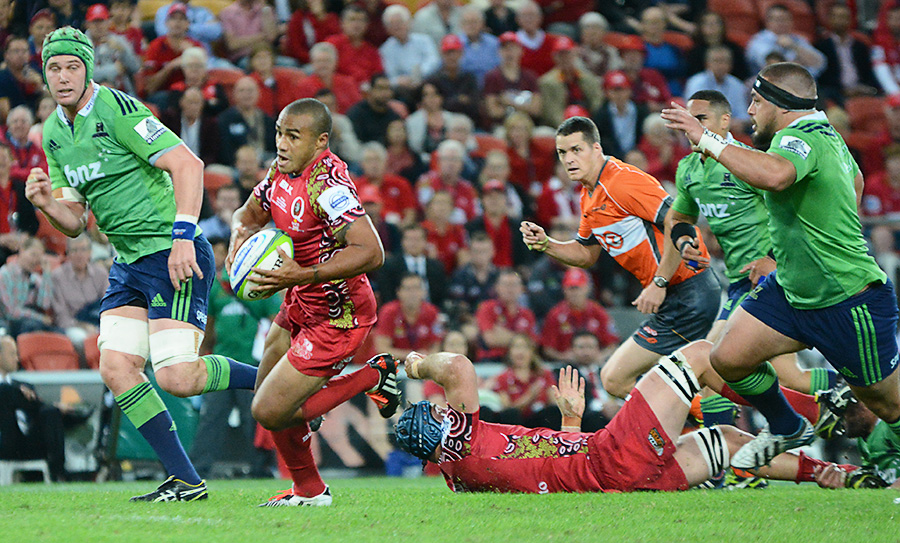 The Reds hosted the Highlanders fresh from the bye and looking to get their season back on track.

OK, it’s well past season saving time, that horse has well and truly bolted. This ones all about pride. OK, there’s not much pride to be found in this season either. It’s actually all about Will. The grumpiest man in red does not like losing, if the boys drop this one he will be filthy. 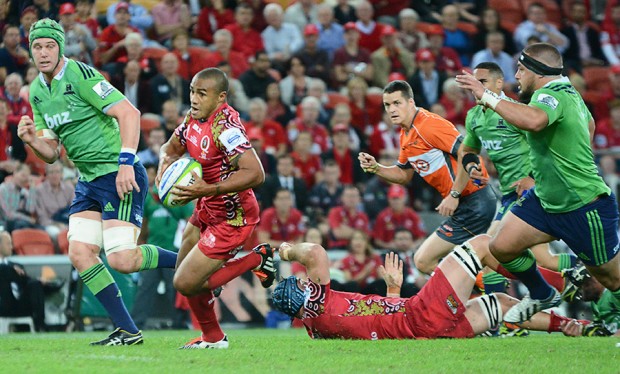 The centurion on the run.

The Reds turned down a penalty, opting to go the line, signalling their intent to attack. This intent paid off when Curtis Browning went over for his first Super try, converted by Mike Harris. It came on the end of a period of sustained attack, the pressure eventually paid.

Lateral attack was the order of the day from there, the Highlanders doing the best to get across the advantage line. The Reds scrambling defence somehow managing to pull them up.

Another period of pressure from the Reds had them on attack in the Highlander’s 22. A poor Genia box kick was saved when Highlanders flyhalf Lima Sopoaga dropped the ball in goal and it was swooped on by Rod Davies for the Reds second try, Harris adding the extras.

It seemed the Reds were enjoying this try scoring activity. When they found themselves quickly back in the opposition 22 after the restart with freshly turned over ball, they spread it quickly before Will Genia put in a deft kick over the top, collected and beautifully finished by Dom Shipperley. Mike Harris converted to have the score at 21-0. There was no change to the score before half-time. 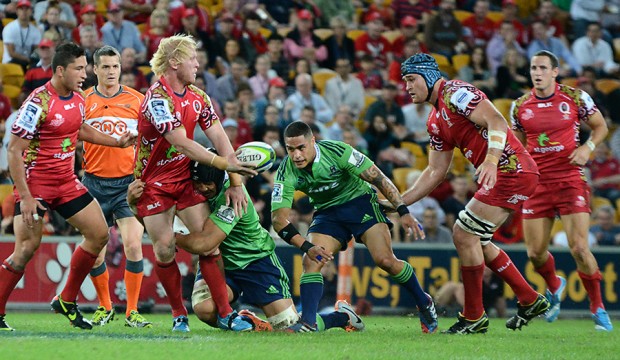 The Half-time break was good to the visitors, and they came out hard. They turned down certain points when awarded a penalty right in front. Several phases after the scrum it looked like they’d butchered a certain try before Lima Sopoaga got the ball down. He converted his own try.

Not happy with this change in fortune, The Reds hit back. Earning only their second 4 try bonus point of the year, the Reds pack took it into their own hands and worked a cracking push over try from a 5 meter scrum. Jake Shatz getting the gong. Mike Harris continued his perfect night with the boot.

Showing they could do it too, though not with as much class as a pushover try. From the try they spread the ball and Sopoaga put in a grubber, straight into Genia’s leg. The ricochet was collect and quickly spread into Buckman’s hands and he crossed for another try (another try off the boot of Genia, I might add). Sopoaga added the extras.

In a move that will have the purists applauding, it was the 63rd minute and the Highlanders lined up the first penalty kick of the match. Replacement flyhalf Hayden Parker getting the points for the visitors to have the score 28-17

Not to be outdone, when the Reds were awarded a penalty on the 40 out, they also went for poles. Aussie Mike Harris making it look easy. 31-17 it was.

The Highlanders hit back with Ben Smith crossing for a try. In the lead up to the try, Fekitoa running a decoy line took out a Reds defender that gave the numbers for them to get across the line. That got the Reds all riled up and they hit the line hard, Shipperley coming close running a great line before Red 10, Ben Lucas threw a floating cut out pass that was collected by Osborne who went the length of the field before being chased down by rocket Rod Davies, who pulled him down but couldn’t stop him from getting the ball over the line. Hayden Parker converted it. 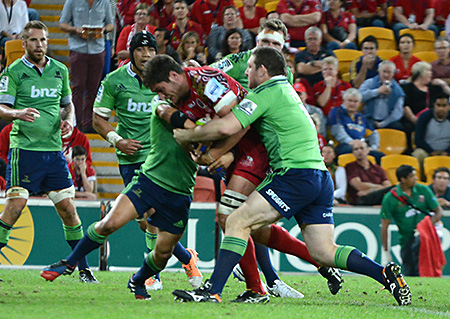 With only 7 points in it, the Highlanders came out hard. A penalty to the attacking team 5 metres out was quickly tapped and one phase later Fumiaki Tanaka jumped over the ruck to put the ball down. Hayden Parker evened it up with a minute to go.

As the players’ Sisters were puckering up, the Reds had different ideas. The team rallied and phase after phase they hit the line, slowly working their way down the right end of the field. Jake Shatz eventually getting over to the steal the game. Will Genia took the conversion and sealed off a perfect night by adding the extras and the Reds were off to enjoy a chicken dinner, taking the game 38-31.

Is there a mathematical chance of finals action???

The Reds pack’s push over try. Who could not agree, it was a thing of beauty and is sure to have the crowds flocking back to Suncorp.

It was the Sanchez Genia show at Suncorp tonight.

Will Genia was having a whale of a game for his 100th. Two tries setup from the boot. The only thing that would make it better would be if he’d kick more. His box kick is sublime.