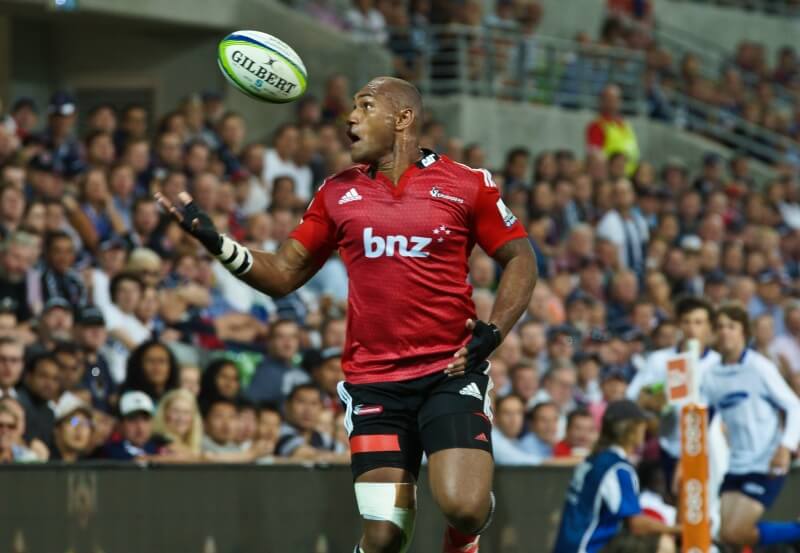 The surefire boot of Tom Taylor led the Crusaders to a comfortable, if uninspired, 25-19 win over the Melbourne Rebels in a dour affair at AAMI Park on Friday.

The Melbourne Rebels were desperate to atone for the embarrassment they suffered at the hands of the Western Force in Perth the previous week, with coach Tony McGahan reverting to the same line-up that had powered past the Cheetahs in their season opener. The Crusaders, meanwhile, were looking for their first away win of the campaign, the side beginning to click into gear following a slow start to the season.

The first half provided little more than a penalty shootout. Set pieces devolved into little more than niggle-fests between the two packs, and both found themselves on the wrong end of James Leckie’s whistle as a result. The Rebels opened the scoring in the third minute, with Jason Woodward slotting a penalty from 40 metres, after Wyatt Crockett failed to release the tackled player in a ruck.

While the Rebels showed more intent than their lacklustre performance against the Force, sloppy set pieces let them down almost immediately, getting caught offside and kicking away possession in poorly chosen situations. One such infraction led to the Crusaders first goal, Luke Jones’ offside handing Tom Taylor a shot from just to the right of the posts. He made no mistake, leveling the scores after 8 minutes.

The quality of set pieces from both sides continued to degrade, with Luke Romano pinged for blatant hands in the ruck, giving Jason Woodward another easy shot at goal. He converted, giving the Rebels back the lead after 11 minutes. It was short lived, the Rebels conceding position on the field, and then another penalty at the breakdown, with Mitch Inman caught offside. Tom Taylor pointed at the goals, and again brought the visitors level, 6-6 after 13.

Try Time for the Crusaders

The Rebels had a chance to regain the lead after Ben Funnell was caught offside, but Jason Woodward could not convert. Instead, it set off a series of unforced errors from the home side, with Higginbotham, Leafa and Weeks handing over possession to the Crusaders through penalties at the breakdown. Taylor converted one such chance at 22 minutes to give the Crusaders the lead, and despite Lachlan Mitchell and Mitch Inman combining for the first true run towards the posts of the night, it came to nothing, and Taylor was given another opportunity to extend the lead, kicking his fourth goal of the night near the half-hour mark to push the score to 12-6.

As the half crawled to a finish, the hosts would have one more chance to peg the margin back, Kieran Reid caught offside at a ruck cradling the line of touch. Jason Woodward elected to take the difficult kick, and converted, the score 12-9 at the half.

Nothing looked like changing in the first ten minutes after the teams resumed, Taylor converting an offside penalty for the Crusaders to extend the margin, before Bryce Hegarty almost immediately did the same to restore it.

The game desperately needed some open play, and it was the visitors who eventually delivered, Kieran Reid setting up Ben Funnell to break through a disseminated Rebels defence for the first try of the match. Taylor converted and suddenly the Crusaders had a seemingly insurmountable 10-point lead.

Melbourne had looked better than last week when given space to run the ball, but the quality of the breakdown, as well as a tendency to kick away possession when they should retain it, never afforded them much of an opportunity. When Taylor converted another penalty from straight in front with ten minutes to go, there was nowhere to turn for the hosts.

That apparent concession, oddly enough, led to some of the most enterprising play of the match, with Telusa Veainu and Hugh Pyle making quality runs and giving the Rebels desperately needed field position. When the Crusaders conceded a penalty and the Rebels took the advantage, a blistering maul flattened the visitors, sending Scott Fuglistaller over for a try. Bryce Hegarty converted to award the Rebels a bonus point for their efforts.

While the effort in this game was closer for the Rebels to their first match than to the second, they are proving that old habits are hard to break. With a trip to the SFS to face the rampaging Waratahs up next – one they potentially may be taking without Laurie Weeks (concussion) and Jason Woodward (knee) – whether they will get a chance to break those habits remains to be seen.

Ben Funnell’s try broke the Rebels’ backs, the points proving insurmountable to a team for whom trading penalties seemed difficult.

Tom Taylor kicked like a man possessed, his 100% record (six penalties and a conversion) never letting the Rebels catch a sniff.

The disappearance of Rebels talisman Scott Higginbotham was curious. He struggled with the quality of the breakdown and made little difference elsewhere. He has not had such little influence over a Rebels match in some time.