Reds Scrape Home in a Card-fest! 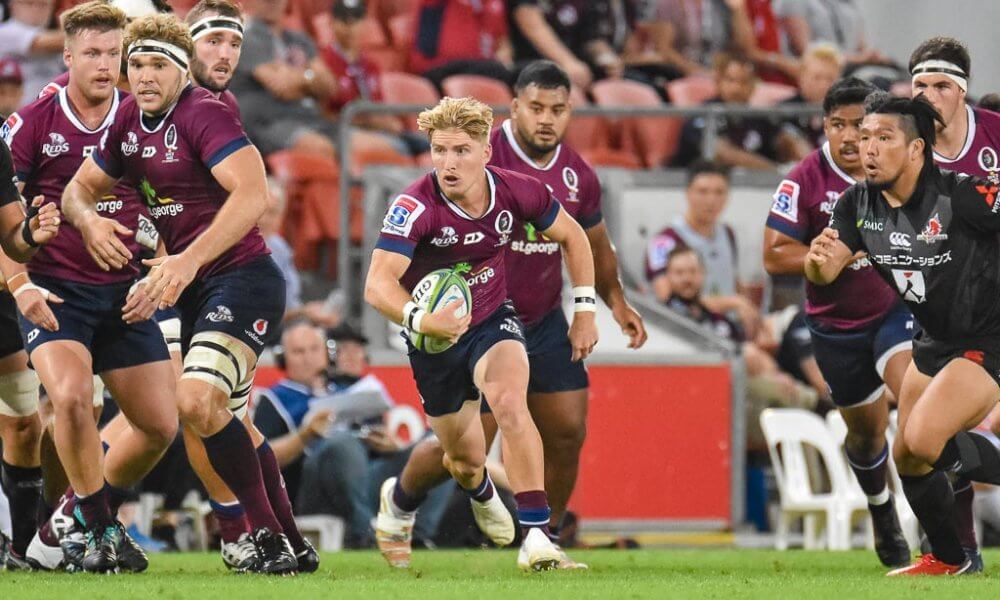 Reds Scrape Home in a Card-fest!

I was thinking that a hoodoo busting win in Durban, followed by a bye was the perfect preparation for the St George Queensland Reds coming into this season defining match against the Sunwolves.  As they’ve shown a few times this season though, it’s the one’s they should win that seem to trouble the Reds the most.

As I watched the pregame coverage on Fox Sports I had an uneasy feeling with all of the finals talk for the Reds.  Yes, the results last week while the Reds were on a bye really opened a door and put their fate back in their hands but still, the Reds are still second from the bottom of the Australian conference and more losses than wins. 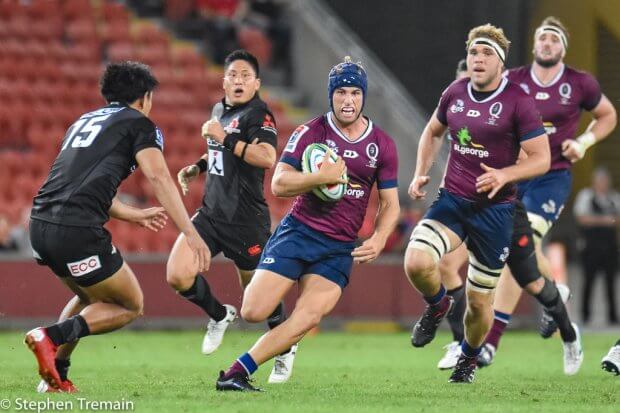 The Sunwolves opened their account early with a penalty that might’ve had the Japanese audience a bit perplexed.  Referee “Ozzie” Angus Gardner penalising Taniela Tupou for a “second crack”.  Parker slotting the kick to make it 0-3.  The Reds almost hit back immediately through young gun Jock Campbell who was stopped agonisingly close to the try after a sharp run from McDermott.

The Reds were looking a little rusty from their break resulting in some poor passing.  Their communication in attack lacking a little also. The Sunwolves on the other hand were making the most of their ball and some sharp passing and interplay found them in the Reds red zone again when an easy penalty for offside gave Parker the chance to slot another 3.  0-6

A good restart instantly put the Sunwolves under pressure and the Reds won the ball.  Some quick ball had the defense back pedaling before conceding a penalty which Bryce Hegarty kicked to make it 3-6.

A poor exit from the Sunwolves restart had the Reds on their 22 defending a lineout.  The Sunwolves won the lineout and went to put it through the hands when the evergreen Reds backrower, Higginbotham snatched an intercept and ran half the length of the field before being dragged down.  Hegarty ran the perfect support line to recieve a pop pass and run the last 25m for the try.  His conversion attempt though, hit the upright and it was 8-6.

The Sunwolves missed a golden opportunity when Masirewa dropped the ball cold with only the tryline in front but I’m not sure that it wouldn’t have been called back anyway for what looked to be an obstruction that created the hole for Masirewa to run through.  It mattered not though as minutes later the Reds were caught without a fullback back and Parker rolled a perfect grubber through to put Gerhard Van Der Heever over in the corner.  Parker kicked the conversion from the sideline and it was 8-13.

Not wanting to wreck the real see-saw contest, the Reds looked to hit back.  Some excellent footwork from Hamish Stewart got the Reds on the front foot and in space.  Campbell continued his impressive start, almost putting his Captain Kerevi over in the corner.  Some cynical play from the retreating Sunwolves though saw prop Mikami with a yellow card.  The Reds opted for a scrum and nearly drove it over but fell short.  After some sustained pressure the Sunwolves were lucky not to lose another to the bin but then pulled out a huge scrum to win a penalty on the Reds feed and exit their half and get out of gaol.  Still 8-13.

The next 10 minutes the game settled a little and both teams seemingly happy to play field position.  Smart from the Sunwolves but with a man up, I was expecting the Reds to try and exploit their advantage but they didn’t and failed to score a single point while the Sunwolves prop was in the bin.  As soon as the Sunwolves were back to 15 players again the Reds started running the ball again.  Hot on attack, Masirewa was penalised for hands in the ruck and was shown a yellow card.  The Reds turned down the gift 3 points and instead opted for the scrum but immediately gave away a free kick. With 65% possession and a one man advantage for almost half of the first half they desperately needed points to try and regain the lead but with a late penalty, they kicked for the corner and mauled well before turning it over and that was oranges.  Reds 8, Sunwolves 13. 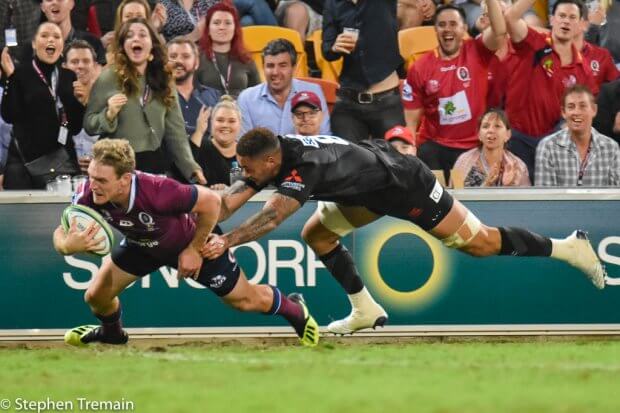 The Reds were first to score in the second half after a trademark centrefield run from Kerevi almost put Campbell over in the corner.  Some pick and go’s on the Sunwolves line were initially repelled until the Tongan Thor grabbed the ball and stormed across the line.  Hegarty converted the try to make it 15-13.

The lead wouldn’t last long as the Reds gave away a penalty about 40m out from their own line and Parker didn’t miss to take the lead back. 15-16.

The Reds were looking to run the ball a bit more in the second half and on a break out run up the right touchline, Jock Campbell was caught high by Semi Masirewa.  Angus Gardener was slow to call advantage but looked to get either an Assistant Referee or TMO intervention because as soon as the play broke down he called time off and signaled the TMO.  The three replays all showed a high tackle, somewhere around the neck of Campbell.  It was probably 50/50 whether it was a yellow card or just penalty but the referee thought is worthy of a card and as it was Masirewa’s second yellow card for the night, it was upgraded to a red.  The Sunwolves would play out the remainder of the game with 14 men.

The Reds kicked for touch and after the ensuing lineout kept in in tight for a few phases then a deft cross field kick from Hegarty found Naivalu in acres of space to score the easiest try he’ll ever score.  Hegarty added the extras to make it 22-16.

All the play in the first 10 minutes of the second half was in the Sunwolves half and the Reds had most of the ball but were struggling to cross the line.  A good turnover penalty from Liam Wright right in front of the posts gave Hegarty an easy kick to take the lead out to 25-16.

After the kick off the Reds opted to keep the ball in hand and run it out of their half.  A sloppy clean out from JP Smith who came straight in from the side gave the Sunwolves a penalty right in front and 3 points. 25-19.

This is where is started getting a little strange.  The Reds with a one man advantage were struggling to score points.  In the first 20 minutes of the second half, the Reds had only made 8 tackles to the Sunwolves 43.  All the stats were going the Reds way yet they were struggling to score points.  Brendan Paenga-Amosa came on for Alex Mafi and immediately drove himself over the tryline but it was correctly ruled a no try as he was initially tackled short of the line.  Trailing by only 6, this seemed to give the visitors a rise.

In the next minute after a kick for field position Hamish Stewart found himself in two minds and threw a pass straight to Van der Heever who just had to stroll over the line to score under the sticks.  Parker was never going to miss and the Sunwolves were in the lead with 13 minutes to go. 25-26.

Looking at the the faces of the Reds faces I expected to see some panic creeping in, but I couldn’t.  Kerevi and Rodda looked composed as they tried to rally the home team.  A good run from Tupou put the Reds a couple of meters out but an excellent turnover saved the Sunwolves briefly.  The exit kick though was loose and immediately put them under pressure on the other side of the field and after conceding yet another penalty, the referee went to his pocket again and dished out his fourth yellow card to the Sunwolves so they would play the last 10 minutes with 13 men.

The Reds kicked to the corner and drove the lineout about 15 metres forward but about 25 metres across to score under the posts.  The conversion making it 32-26.

With 5 minutes left on the clock the Reds had sustained a number of phases inside thier own 22, turned the ball over and cleared.  The quick throw from the Sunwolves was crooked and when play stopped the TMO intervened with alleged foul play.  The replay went back to the Reds 22 and Harry Hockings, after being cleaned out had his foot held as he was trying to rejoin the defensive line.  He took offense to the hold and kicked out with his boot, contacting the Rahboni Vosayaco of the Sunwolves in the head.  The TMO and referee agreed that Vosayaco should be yellow carded for the cynical play and Hockings should be Red carded for the foul play.  It would be 14 v 12 for the last 5 minutes, the Reds up by 6 and a penalty to the Sunwolves right in front.

There were so many.  This game should’ve been an entirely one sided affair but was on a knife edge for most of the second half.  I’d say the most pivotal though would have to be the red card to Masirewa.  Reds went from hoping to scrape out a win to contemplating a bonus point victory in that moment.  If the Sunwolves had’ve managed to win that though the game changer would’ve been Hamish Stewart’s pass to Van der Heever for the try to bring them back within one score.

I found this hard to pick because there were a few players with some really good stand out moments, but most of them also had a few moments that they’d rather forget.  So for that reason, I went with our young general, Tate McDermott.  He did everything you want from your scrum half and more and really didn’t put a foot wrong all night.

There’s the obvious players here that keep getting mentioned.  McDermott and Mafi to name a couple.  I really wanted to put Hamish Stewart in here though tonight.  He had some great runs and really opened up the defence sliding into the attack from fullback.  A couple of poor plays though shows he still has more to learn.  This isn’t a criticism, it’s a product of his age.  He will get there but not yet.  So I’m going left field for my Wallaby Watch and giving a nod to Scott Higginbotham for a vintage performance from the number 8.  Stranger things have happened! 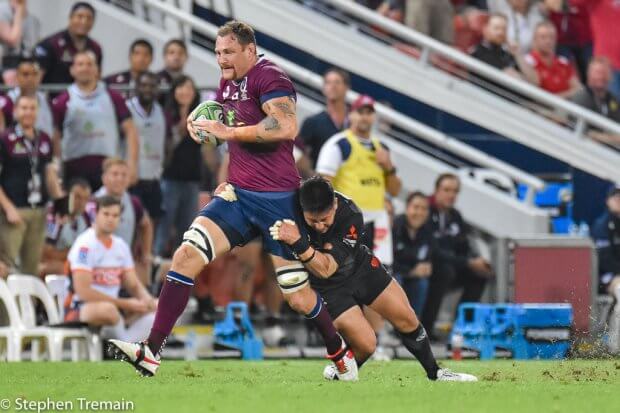 Scott Higginbotham is run down after taking an intercept