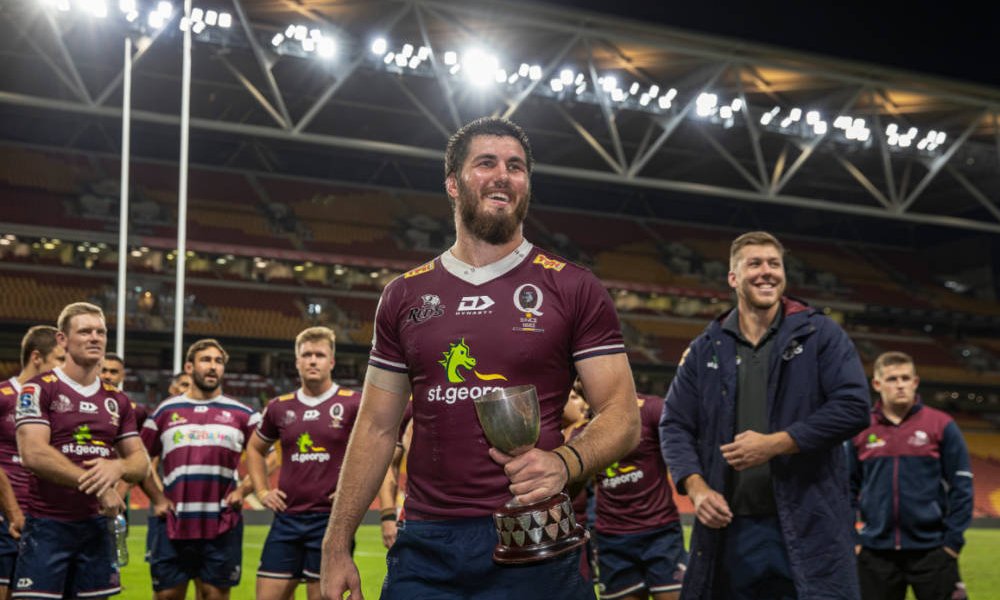 The first game of the revamped Super Rugby AU competition could have no more fitting opener with the Reds hosting the Waratahs at Suncorp Stadium. With the crowd socially distanced, the footies hygienically cleaned and the players appropriately temperatured, it was game on in the new world of live sports.

The game started in an earie silence as the crowd not only seemingly adapted to, well, a crowd but also to actual rugby.  The action was predictable from the kick-off with a couple of dropped balls giving the Reds the first feed to a scrum.

And a dominant scrum it was earning the Reds an early penalty. It was noticeable that James O’Connor went for an early 50-22 kick, with the advantage, perhaps just to keep the Tah wingers hanging back in defence.

Michael Hooper put in the first big hit of the night as he smashed a Harry Wilson run in centre field. The young Reds 8 dropped the ball in the hit, and it was the Tah’s turn to have a scrum feed. The resultant scrum went down, and the penalty count was squared up at one apiece.

Robbie Abel had boasted the most accurate lineout stats of the previous Super Rugby comp, but he was astray this time and the throw went long. With Fraser McReight securing the loose ball, the Tahs were found to be offside and yet another penalty was called.

A superb Bryce Hegarty kick for touch put them in perfect position to set their attack. A clean lineout and a somewhat convoluted backline move provided enough second guessing in defence for Liam Wright to find a gap off a Tate McDermott pass to score a try.  Reds 7-0

Yet another penalty, for Hamish Stewart not rolling away in the tackle, provided the Tahs with the position.  Abel’s throw was on target this time and while it took the Tahs a little longer than one phase, they had the Reds struggling to defend around the ruck and it was soon tighthead Harry Johnson-Holmes who had burrowed over to score. 7 all.

The Tahs were the first to find real space as Jack Maddocks took a high ball under pressure. They took the ball wide and James Ramm was in space on the wing.  He was looking to set up young centre Joey Walton on the inside, but the pass went down. Perhaps a lack of combination evident early on.

The last thing the Reds needed, given recent squad departures, was for an injury to a lock.  Well it happened with Angus Blyth getting a head knock in a tackle allowing debutant Tuaina Taii Tualima to get an early, yet unexpected run.

A couple of Tah high tackles marched the Reds up field and gave them more quality territory with a lineout just 5m out. The lineout won, they tried to power over as the Tahs had done to them.  Strong defence on the likes of Taniela Tupou and Wilson kept the Reds at bay, but once James O’Connor found Filipo Daugunu out wide one on one, the try was never in doubt.  Reds 12-7

One of the Reds’ best in the original Super Rugby season, Hunter Paisami, took his time to get into the match. But a massive hit on Ramm about a quarter of the way into the match was a big moment.  The Reds piled into the ruck over young Ramm and the penalty was secured. Taniela Tupou barged over from the lineout but the try was disallowed as he was ruled to be offside at the ruck.

Tupou was giving poor old Angus Bell an absolute workover at the scrum. Apparently, the fans hate scrum resets, but the QLD crowd was loving the repeat packs as the Reds continued to dominate the visitors. Bell was ultimately yellow carded, somewhat unfortunately as he was let down by the rest of the pack.

Then, quick as flash, Tate McDermott took the quick tap and was over for a try. The Tahs pack was stuffed after the series of scrums and were clearly catching their breath as McDermott shaped to kick for touch.  He fooled them, and most of his own teammates, and stretch the QLD lead further. Reds  19-7

They got to catch their breath, and lessen the lead, when Will Harrison kicked a penalty soon after the restart. Reds 19-10

There wasn’t a lot of respite though.  While the Tahs stole a lineout, they turned over the ball in another big hit. McDermott found space and looked to be away. A try saving tackle by Jack Maddocks was quality and the Tahs looked to have turned the ball back over. However, it trickled over the try line and Liam Wright looked to have cunningly snaffled a try by falling on it.  He was ultimately ruled off-side and the frown was obvious despite his big bushy beard.

The Tahs would have been happy to get away with that, and happier still to close the gap a little further through another Harrison penalty right on half time.  Reds 19-13

The Waratahs posed enough questions of the Reds’ defence in the first half to start questions being asked as to the impact of Peter Ryan’s departure from Ballymore.  It uncertainty remained in the early stages of the second half and the pressure came to points as Harrison kicked another. 19-16 Both teams started to look for space out wide in the early stages and it created many a heart in mouth moment.  For both teams.  Each team was able to secure turnovers while defending and break out down the field. But it was the Tahs who first took advantage when Jack Maddocks ran onto a lovely Lachie Swinton inside ball and found the Reds players social distancing to the extreme.  The match had well and truly swung the Waratahs’ way. NSW 23-19 However strongly the Reds started, they were starting to look far more a ramshackle mess in attack.  The quickness of the ruck was preventing them from setting up any real structure and their playmakers, in O’Connor, Stewart and Hegarty, couldn’t get their backline clicking.  The Waratahs, however, were starting to play with much more precision and intensity. The Reds had to simplify the game plan and so they did.  A penalty awarded, a kick to the line and a simple rolling maul was the go.  The Tahs kept them out while infringing occasionally, the Reds played repeated advantages and eventually Harry Wilson powered over for a crucial try. Reds 26-23 Tupou may have earned his team a one-man advantage in the first half, with his scrum dominance over Bell, he soon had a card of his own for a 2nd late tackle infringement.  It would leave his team down to 14 at a crucial time in the match and give the Tahs another three points. 26 all. Despite an off/pre-season seemingly made for goal kicking practise, and with Sir Dave Aldred in town, the Reds goal kicking was still a major concern.  Hegarty missed enough that could have sealed the game, so O’Connor was thrown the tee and got the ball through the posts.  Reds 29-26 The battle of the flankers was epic all night with Michael Hooper in everything and backed by the new ‘brick with eyes’ Swinton.  Wright and McReight were the only ones to secure turnovers however, and McReight snagged one at the most crucial of times, with just minutes to go in the game.  It corresponded with the time Tupou was back on the field and the Reds fans were feeling just a tad less nervous. Another breakdown penalty against the Tahs, this time when lock Tom Staniforth was unable to roll away, and the Reds were able to seal the match and claim their first victory over the Tahs since 2013.  Reds 32-26 The Reds would be relieved to get away with the win, but perhaps should be disappointed considering the start they made.  Their defensive system requires a fair bit of work.  The Waratahs will of course be disappointed with the loss but were very impressive at stages and can, for once, be the team that uses the ‘young team’ excuse. As for the rules, I reckon they sped the game up noticeably with the goal line drop fears, resulting in many counter attacks. Further the 50/22 & 22/50 kicks played a key role in the game with QLD particularly benefitting from some astute kicks.  The rucks seemed significantly quicker and I think attacking structures will take some time to adjust to this. A sniping, playmaking half such as McDermott has a lot to offer in this scenario. Next week the Waratahs host the return of the Force at the SCG on Saturday night, with the Reds taking on the Rebels at a yet to be determined Sydney ground on Friday. Embed from Getty Images

While it looked like the Reds may race away with it early, the Tahs had the better of the encounter on each side of the break.  Late in the game they were hot on the attack and it was that Fraser McReight turnover that prevented any future chance for them to score.

It could go to a few players from either team, with Swinton a strong candidate.  Instead I opted for Liam Wright who played hard on the ball all night, but also displayed calm and assured leadership throughout. .

You can only assume the slate is completely wiped clean so everyone starts afresh.  Hooper was fantastic for the Tahs, but Wright I reckon edged him for his more clinical play. Lachie Swinton was the other forward to catch the eye while Lukhan Salakai-Loto covers a hell of a lot of distance for a big man.  Maddocks looked a lot more assured from his preferred fullback position while I though Will Harrison played a better game at 10 than the experienced James O’Connor.