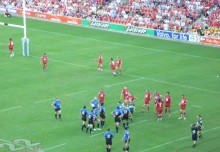 Just waiting for the next Penalty attempt

Watching the game at Suncorp Stadium, I was glad the air conditioning in the press box wasn’t damaged in the Floods, it was HOT.

There was not a chance the Force were going to come out and do anything other than be the Reds bitches. However, no one sent the memo west. Both teams came out and showed good intent, but it was the force forwards who showed the early dominance.  The teams traded penalties, but it was the force who got on top, with Quade only getting two opportunities at goal, and slotting both, J’OC got 5 opportunities, missing one to have the Reds down 6-12 in the game they couldn’t lose. The game was set as such a foregone conclusion, that when Will Chambers knocked on while scoring a try, the fireworks at the stadium went off.

The highlight of the half for me was Rocket Rod Davies showing that he wasn’t all speed, and could actually throw a couple of punches at Brett Sheehan, earning himself 10 in the bin for his troubles. The ability of the Reds to continue a man down in the heat will be telling in the result.

The second half continued much the same, with the Force’s more mobile pack very busy and effective in disrupting the Reds continuity. Another couple of penalties from each kept the score board ticking over, but still the margin didn’t change.

A deft lineout move from the Reds saw a short throw to the front passed straight back to Saia Fiangaa who ran the 30 odd metres to the line, scoring the first try of the match.  Quade pushed the conversion wide.

The momentum shift appeared to continue for the Reds, when the force were shown a yellow card, however the Force pounced on a loose pass from the Reds with JO’C running near length of the field for an opportunistic try.

Big Kev then made the decision to keep the ball out of the backs hands, opting instead to use the power of the big forwards to work a move, barging over the line. James Hanson getting the points. Quade added the extras and the Reds were now in front.

A heart breaking loss for the force, after the effort they had put in, but this will be a great confidence booster as the reds look to add some composure and maturity to the BBQ rugby of the past.

The crowd today was 26 060, down a little on the 30000 the Reds were hoping for. Reg and I are off to the presser now, we will be back soon with a full report

Rebels v. Waratahs – All the Tries
Brumbies hang on against Chiefs