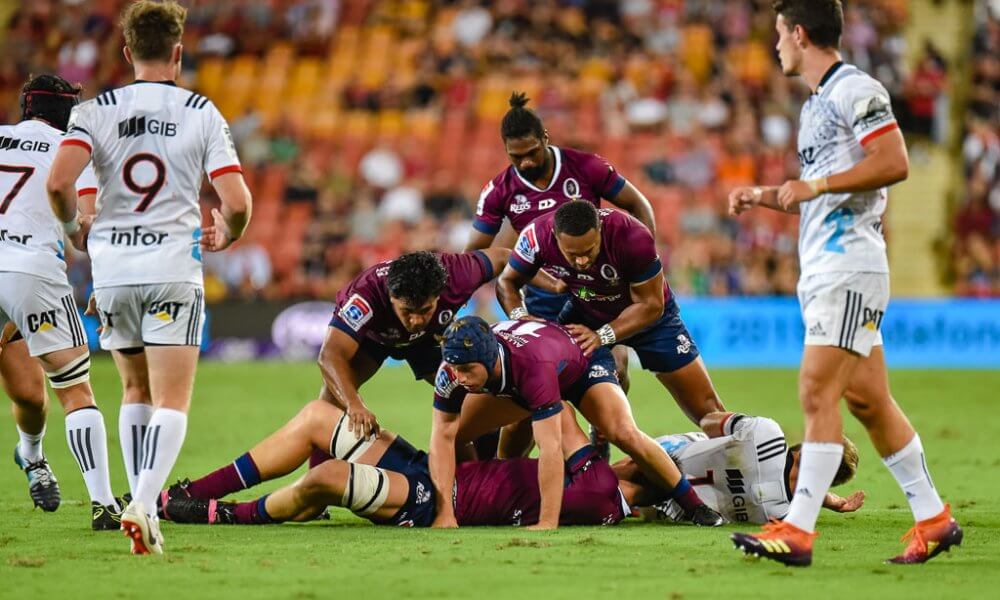 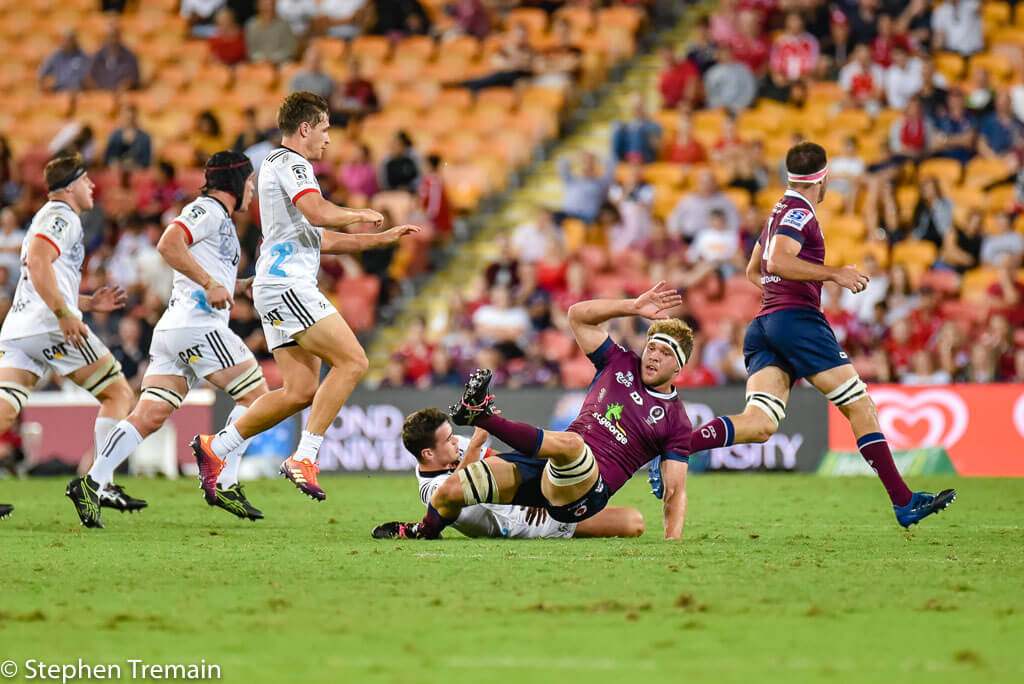 The Reds struggled to generate much all game. Credit Stephen Tremain

After a near miss against the Highlanders over in the Shed last week, the Reds fronted to their first home game of 2019 with proclamations of not letting the close games slip and making the moments count. Let’s see how they fared against a Crusaders side that has been riding high on a 17-match win streak Both sides were 1-23 as per program

With the Crusaders in an unfamiliar all white strip to counter the now permanent maroon kit, we kicked off on a night of high expectation from a good sized crowd. The Reds were showing a willingness to try things early, with Hegarty in at 10 and Hamish Stewart in the centres from one scrum for example. Good hard running and an emphasis on the chase after the kick was also evident.

Some pressure from a penalty led to typical Crusaders play, attacking one way, and leaving the Reds short on the right. A neat left footed kick-pass from Jack Goodhue led to Brayden Ennor having all sorts of time on the right wing to dot down in the corner.

Almost straight from the kick off the Crusaders then scored one of the best tries in the young season. A number of missed tackles saw Will Jordan bust the line and while being chased down by Hegarty off loaded to Ennor. Jordan then backed up and got the ball back on the inside and after Mounga missed again it was 10-0 after nine minutes. Could the Reds settle down and pressure a team that clearly was playing with no fear?

The Crusaders were running the ball the same way the Reds did last week- making metres after contact. They were also more aggressive at the breakdown, causing turnovers and generally making life difficult for the Reds in all facets of the game. Ten minutes before half time, and the Reds had yet to come close to even look like troubling the scorer. That changed just before the break when they backed themselves off a penalty. After many phases of forward work, and a massive hole to the left, it was swung right and captain Kerevi dived over. Hegarty converted and going into the break and thanking their lucky stars to only be down 10-7. 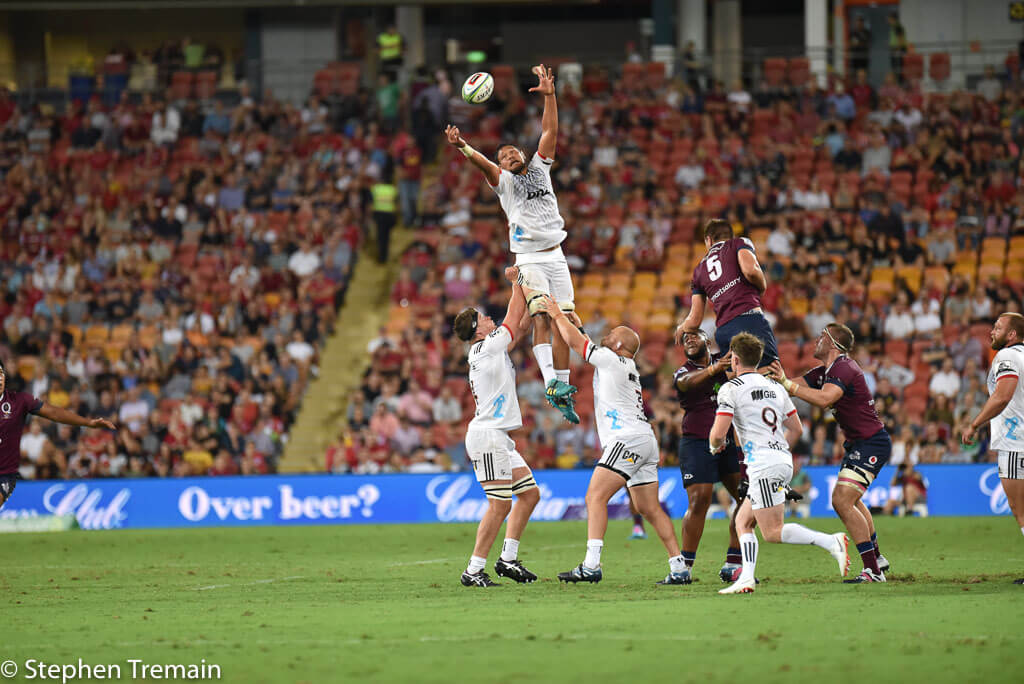 The Crusaders dominated the set piece and most other elements of the game. Credit Stephen Tremain

The second half started in a similar vein, the Crusaders put together 22 phases before earning a penalty. From the ensuing line out, a well worked lineout saw Whetu Douglas barge over. Mounga found his radar and it was 17-7.  A Salakaia-Loto yellow card and a weakened scrum led to another penalty and again the Crusaders scored, this time through Jordan Taufua. 22-7 Crusaders and things were looking very grim indeed.

As the game meandered towards a conclusion, some interest was generated when it appeared Liam Wright went over. Many replays later, it was determined JP Smith held back a defender and the previously given try was disallowed and the crowd was not best pleased. It looked like Bryn Hall milked it.  Scott Higginbotham scored in the 75th minute to at least make it interesting. The last ten minutes were perhaps the best the Reds played all game, running with intent and making inroads. Young Isaac Lucas really stood out in this period, having replaced Hamish Stewart after 64 minutes.

After a frantic closing stage, it ended 22-12 to the Crusaders. Really it was deceptive though, the Reds never looked like winning or threatening this winning streak that now totals 18.

Like Rugby Reg, I had drunk the Kool-Aid and thought we might sneak this one. But we were never in it, against what was to be fair a top class Crusaders team. They are clearly the benchmark of the competition and some lessons will certainly have been learned. They need to learn those lessons before next week against the Waratahs in Sydney.

MATCH TURNING POINT
The Reds were on the back foot after those first ten minutes and spent much of the first half holding on by a thread. Despite the half time scoreline, the Reds weren’t in the game.

GAGR MOTM
I fear sometimes that the dark arts of the front row don’t get enough credit- but tonight the MOTM goes to Joe Moody, who gave Taniela Tupou all he could handle and more. The usual dominance of the Reds pack at the scrum was not only neutralised but put under pressure and forced to concede penalties on a number of occasions.

WALLABY WATCH
Losing Jordan Petaia to a foot injury after 15 minutes wasn’t a good sign, and neither was the misfiring first half scrum. This limited the ability for the Reds to go to their stock and trade. All the standouts from last week were quiet, Rodda, Tupou, Naivalu all worked hard but were struggling to cope with the amount of defending they were being asked to do. The now eligible Smith brothers brought some starch to the scrum once they came on, and one expects JP to slot back in at starting loosehead sooner rather than later.