Reds and Brumbies – Skirmishes Before The Battle! 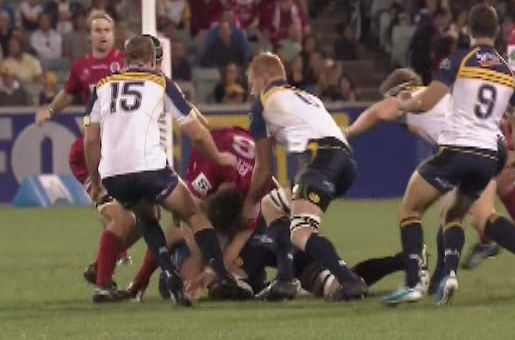 Reds and Brumbies – Skirmishes Before The Battle!

The Reds and Brumbies have been involved in a PR battle today pointing out that their opposition needs to be monitored closely by the referee in Saturday nights match. 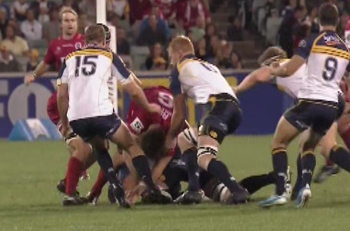 It started with an article from Ewen McKenzie for the Sydney Morning Herald today with the headline “Mucks Killing The Ball And Game” where he made a number of comments regarding issues such as the impact of players being offside and interpretations at the ruck. In his column Link claimed that tactics used by some teams are very effective at slowing the release of the ball from the ruck including these comments – “The ball can also be slowed by many other interesting tactics, which include falling on the ball, counter-rucking and very specific infringements that make it difficult to play and referee” and “A quick look at the statistics show us that the two best teams in the competition at doing this are the Chiefs and the Brumbies.”

The first response from the Brumbies came from Laurie Fisher on Twitter this morning saying “Interesting and timely article by Ewan (sic) today. I wonder if he has e mailed a copy to the referee for this weekend. No stone unturned. Class.”

At their press conference in Canberra today the Brumbies followed up by releasing the statistics on the penalties each team has conceded this season and the reason for those penalties as I understand it, from our man on the ground Brumby Jack, to show that the whilst the Brumbies may have given away a high number of penalties, the Reds are not much better.

So what do the statistics show?

The Brumbies have given away more penalties (93) than any other team in the competition, although the Reds are the second most penalised team (86).

The Brumbies have conceded more penalties than the Reds in the following categories: breakdown 48 to 39; scrum 10 to 9; and lineout 5 to 0. The Brumbies lead the competition with the number of penalties at the breakdown.

The Reds have conceded more penalties than the Brumbies in the following categories: offside play 25 to 23; and foul play 14 to 7.

No doubt the point of this little skirmish is to support the claims each team will make to the referees before the match that the other side needs to be watched closely. Whether the referees will even be aware of the comments made in public or not, both teams have been trying to do what they can to win the skirmish before the real battle.

There will be a lot of pressure on the referee, Glen Jackson, and it’s a big vote of confidence for him from SANZAR that he’s been given this match rather than one of the more experienced referees.

With all the talk about George Smith and Liam Gill together with the importance of the breakdown battle I’m sure there will be plenty of bodies thrown into rucks and mauls. Of course the more bodies in and around the ball, the more players need to get into rucks earlier to try and get the ball back quickly or to slow it down before the opposition arrives. This can often lead to players infringing because of their desperation.

Whilst the focus from referees this season has largely been on ensuring the tackler(s) clear the ball immediately I’ve noticed that referees are also starting to referee the attacking team a little more, especially in regards to players not coming from behind the last feet in a tackle or ruck situation.

With two highly proficient flankers like Smith and Gill getting over the ball carrier almost the moment they hit the ground there can be a tendency for support runners who’ve slightly overrun the ball carrier to see the threat of a defender going for the ball and enter the tackle or ruck from the side. I’ve included a few examples from both teams matches last week in the video below. I think we may see a few penalties for these types of infringements this week.