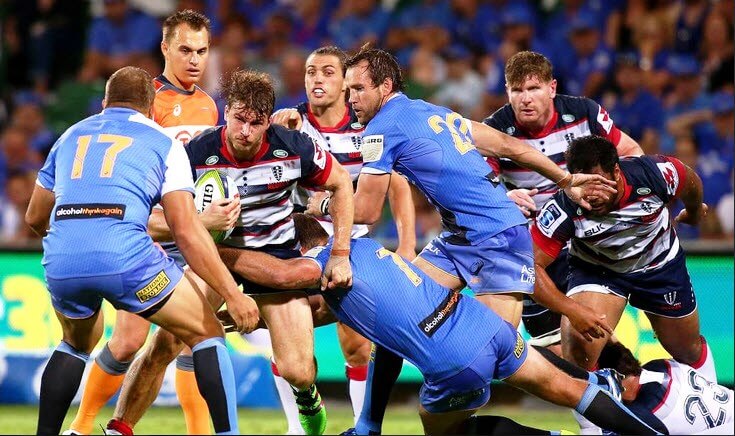 Can the Rebels secure a maiden play-off spot, or will the Western Force have the last laugh in 2020?

On behalf of all Australian rugby fans, I would like to thank both the Melbourne Rebels and Western Force, who could both adopt the name the Traveling Wilburys. Both teams have been away from home, families and friends for three months to ensure the Super Rugby Au competition could occur.

On Saturday afternoon, the Rebels will host the Force at McDonald Jones Stadium in Newcastle.

The finals equation is:

I will leave the discussion there. Anyone who was following the Rebels v Waratahs thread on the Green and Gold Rugby forum last Saturday night will know I was doing backflips and forward flips trying to work out all the scenarios. As Molman pointed out to me I was “spending a lot of time trying to work out a lot of permutations I doubt will happen.” So hopefully the margin is anything but three points.

Given the fact, that the Rebels have had a number of opportunities in 2018, 2019 and 2020 to secure that elusive inaugural finals spot, it is no surprise that there is angst amongst the Rebels faithful heading into this match.

While the Rebels have the upper hand in the head to head 10 wins to four, in 12 games between the two teams the margin has been seven points or less.

Earlier in the Super Rugby AU season, the Rebels needed Super Time” and an Isi Naisarani try to get over the line against the Force.

The Force have looked competitive for many of the matches this season.  By far, their most competitive match was against the Rebels.  All they need is some luck to go their way, and they can notch their first win.

How are both teams travelling?

The Rebels have the ultimate 50-50 season going at the moment, with three wins, 1 draw and 3 losses. Amazingly, the Rebels only earnt their first bonus point of the season last weekend.

The Rebels’ two best matches of the season were a 30-12 victory over the Brumbies, the Brumbies only loss, and a 29-10 win over the Waratahs. The Rebels’ third win was against the Force in Super Time.

The two matches against the Reds were missed opportunities. In the first game, the Rebels led by 10 points with five minutes remaining but showed some game management issues and ended in a draw with neither team being able to score in Super Time. The second match against the Reds the Rebels dominated possession and field position and couldn’t breakdown the Reds’ defence. The highlight for the Rebels in that game was Cabous Eloff’s pink budgie smugglers.

Last week Matt To’omua stood up to kick the penalty goal to get the Rebels the losing bonus point. Although, the Rebels were lucky to be in that position, scoring a try after Billy Meakes passed the ball from row eight of the grandstand and also scoring another try where Meakes arguably obstructed a Tahs defender.

There have been some critics of the Force’s inclusion in Super Rugby Au and in Super Rugby going forward. I think these critics have just looked at the ladder and seen seven matches played zero wins, seven losses, a point differential of -134 and only two bonus points (which is one more than the Rebels) and some of the final scores without watching the matches.

However, the critics have not considered the context of the Force’s inclusion in the competition. The Force had approx. six weeks to put together a Super Rugby quality squad when the majority of Australian players were already contracted.

Even in last week’s 31 to 14 loss to the Brumbies the Force were in the match up to their eyeballs for 70+ minutes.

Once an official announcement is made for 2021, the Force will have a number of months to be able to put together an improved squad.

To’omua scored his first try for the Rebels last week and became the ninth player to score 100 points for the Rebels. There has been a restructure in the Rebels backline this week with To’omua moving from 12 back to 10, where he was playing at the start of the season. To’omua’s kicking game, composure and creativity will be keys to help the Rebels make the finals for the first time. To’omua’s goalkicking may also be important towards the end of the match.

Koroibete scored his 20th try for the Rebels last week, so he became the tenth player to score 100 points for the Rebels and moved past Jack Maddocks into third on the all-time Rebels try scorers list. Koroibete took some time to acclimatise to Super Rugby when he first moved over from the Melbourne Storm. That has all changed now, Koroibete won the John Eales Medal last year and is now a barnstorming winger who goes looking for work.

Philip has definitely put his name under Dave Rennie’s nose for possible Wallabies selection this season, assuming the proposed matches with the All Blacks go ahead. Philip’s work ethic is critical to the Rebels forward pack. Philip is equal 5th in Super Rugby Au for carries with 78 and 4th for lineouts won with 25. The former Western Force lock has signed a one-year deal to play with French Top 14 team Pau for 2020-2021 but is planning to return to Australia at the end of next year’s Super Rugby season and put his hand up for the Wallabies.

Matt Philip at work in the lineout.

Ralston is a dynamic winger, who is a former Junior Wallaby. Ralston has provided a lot of attack for the Force. Ralston is equal 3rd for most tries in Super Rugby Au with 4 tries, which is an astonishing 36% of the Force’s total tries. Ralston is also equal 8th with a number of other players including Koroibete for clean breaks with 7.

Stowers is a fierce competitor who adds power and strength to the Force’s back row. Stowers is an Under 20s representative for both Samoa and New Zealand and has also played Mitre 10 Cup for Wellington and Bay of Plenty. Stowers has had a lot of impact for the Force in both attack and defence. Stowers has the most tackles in competition with 101 and the most carries for the Force with 67, which is equal 10th in Super Rugby Au.

Former All Black Thrush brings plenty of experience to the Force. He has played over 100 Super Rugby games and played more than 50 games for Gloucester. Thrush has won the most lineouts in the competition with 33, six clear of his nearest rival. His and Fergus Lee-Warner’s (5th for lineouts won with 24) battle with Trevor Hosea (3rd with 26 lineouts won) and Philip will be intriguing.

One of Jeremy Thrush’s 33 lineout wins.

The Force will love nothing more to notch their first win of Super Rugby Au and knock the Rebels out of finals contention. It is the Force’s last match of the season so they will leave nothing in the tank and are a reasonable chance of a win. However, with a first-time finals berth on the line I predict that the Rebels will do just enough to create Rebel history (although don’t be surprised if the Force score in the last minute to deny the Rebels a finals spot) – Rebels by 7 points