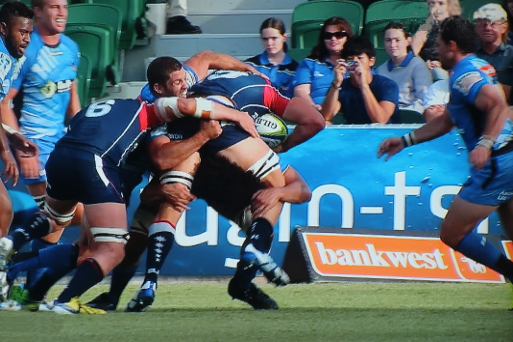 The Melbourne Rebels will look to atone for their shocking performance in Round 4, when they were overrun by a rampant Force team in Matt Hodgson’s 100th Super game.

This is the only Australian derby of Round 10, but it will be a cracker.

The Super Rugby table may suggest that the fourth-placed Force will be favourites against the 13th-placed Rebels, but matches between these two teams are never a foregone conclusion. Up until the Round 4 encounter, matches between the two most recently established Australian sides have been decided by seven points or less.

Defence will be the focal point for both sides. While the Force is one of the leading try scoring teams, it is their stingy defence that has been the hallmark of their victories, and coach Tony McGahan of the Rebels has emphasised defence this year also.

Back in Round 4, the Rebels defence was poor when they let the Force run-in four tries in a 17-minute period, but they settled down and avoided a blowout by keeping the Force scoreless in the last 53 minutes of the game.

Rebels defence should be better in Round 10

The Rebels have improved since then and will probably imitate the Force against the Waratahs last week, and be quicker off the line and more aggressive and confrontational.

But the Force will likely continue on from last week’s gutsy effort and know that the Rebels will not have as damaging and physical ball carriers as the Waratahs did.

The Rebels should be competitive in the set pieces  if  the stats are anything to go by.  Both teams will be looking for ascendancy at scrum time, but the Rebels  may get an edge because their scrum completion rate is in the top five in the competition.

The lineout contest should be fierce also.  The Rebels lineout has improved—but the signing  by the Force of understated lock, Wilhelm Steenkamp, has been a coup for them. Their lineout went from the second worst in the comp in 2013 (79.6% success rate), to 6th in the comp, with an 85.4% success rate this year.

This injury toll, sustained in the physical encounter with the Waratahs, will test their depth since Hugh McMeniman and Chris Alcock are already out for the rest of the season, and Jayden Hayward is not available. Better news is that veteran loose head prop Pek Cowan is fit to play.

Adam Coleman replaces Wykes, for his Super Rugby run-on debut, and Ian Prior starts for his third Super Rugby club replacing Mathewson.  Pat Dellit returns to the starting team as substitute for Morahan.

The Rebels have a settled side and with pig-dog openside flanker, Scott Fuglistaller, deemed fit enough to play, there is only one change to the side that went close to beating the Chiefs last week.

Lock Hugh Pyle is rested and Cayden Neville gets his first start in 2014. Coach McGahan will be looking for some hard physicality from the big unit to go with his obvious skill and athleticism.

Nic Stirzacker, Bryce Hegarty, Jason Woodward and other Rebels’ kickers will have to boot the ball from hand better than the last time these two teams played, and not allow the Force to find so much grass when they kick.

However the losses of Hayward and Mathewson in this area will be harmful for the Force.

This will be the most intriguing matchup of the game because both are vying for the Wallabies no.8 jersey. Higginbotham is a multi-talented back rower: a natural leader, who can play like a centre with deft touches on his day, and also a barnstorming, tackle-busting number 8 in the loose and tight.

But on another day, his whole game can suffer from doing too much, or from poor decision making.

Ben McCalman – most consistent no. 8 in Super Rugby

In contrast, McCalman, more industrious than flashy, just gets stuck in the tight. A major part of the Force’s resurgence this year, he gets through a great deal of work each week. As the most consistent no.8 in Super Rugby this year, he needs to come up against Higginbotham and demonstrate his superiority in direct opposition against his opponent for the Wallabies’ 8 jersey

Nic Stirzacker vs. Ian Prior

These two scrum halves have to shoulder much of the tactical kicking duty for their teams as it will be imperative for their chances of winning.

Stirzacker is inexperienced but McGahan has shown confidence in the youngster and he will need to make good decisions with his kicking and running, to take pressure off his flyhalf, who is also raw.

Prior of the Force has not started in many Super Rugby games but he is a consistent player who has played in two  finals in different teams.  He should be accustomed to decision-making in pressure situations, but he will need to be on the same wavelength with flyhalf Ebersohn from the get-go.

Both players are on the cusp of Wallabies’ selection (Inman a tourist in 2012, and Godwin unavailable for selection due to injury in 2013).  This clash in the midfield is a mouth-watering prospect.

Godwin – has made the most tackles of any back this year

Last year, it was Godwin’s work in attack that drew the attention of fans and pundits; especially his ability to evade defenders and break the line. But his defence has been the main feature of his play this year, as he is the only back in the top ten for tackles made (with 80 tackles).

Inman, while only 25, has emerged as a linchpin in a Rebels backline that is short of experience, and at times, composure. It will be up to individuals like him to exhibit leadership and take pressure off Hegarty inside him.

In addition, he needs to inject his physical frame into the game more, even if it is something as simple as running crash balls in the 10-12 channel, or making dominating tackles on his opposite Godwin.

The result in Round 4 led to the beginning of what has now been an unprecedented five wins in a row for the Force. It also stifled what looked to be a promising season for the Rebels after the huge Cheetahs’ win.

Undoubtedly the Rebels will not make the same mistake twice. They will be mentally prepared for Friday, and they will be seeking redemption. If there is ever going to be a good opportunity to beat the Force, it is now against a weakened Force side.

The Force has been resolute for the past five games, but the forced changes will disrupt both defence and attack. And against a team that is motivated to humble you at home as they were humbled, belief can only take you so far.

And since the Rebels won twice last year they will have some belief of their own.

This is why I tip the home side to win.  Rebels by 3

An affable guy with a passion for rugby union.