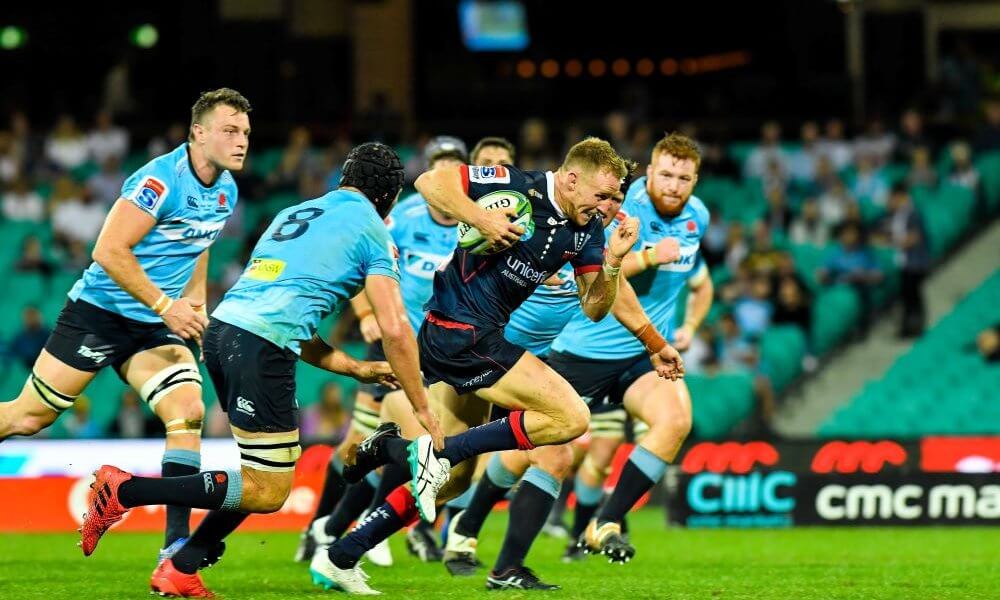 The winless Melbourne Rebels host the winless Waratahs in their first home game this season, Friday evening at AAMI Park.

The prize in this uninspiring fixture is to not be last placed in the competition, for a week at least. And the Weary Dunlop Shield is on the line, of course.

Both of the Rebels opening games, against the Sunwolves (36-27) and the Brumbies (39-26), followed a similar pattern. They leaked far too many points early in each game before closing the gap somewhat in the second half.

The Rebels looked better in both second halves but simply cannot afford to be twenty points down after twenty minutes again this week; they need to be switched on from the kick-off.

The one-on-one tackling by the Rebels has not been up to standard, missing over 25% of tackles across both games.

The Rebels are currently 4th in the Australian Conference and 14th overall.

Waratahs, bullied by the Blues

In Round One the Waratahs faced the daunting task of flying across the ditch to take on the 2019 Champions, the Crusaders. Despite some promising moments, it did not end well for them, with the Crusaders winning comfortably 43-25.

In less than ideal conditions in Newcastle the Waratah’s forwards were overpowered by the Blues’ pack resulting in a 12-35 loss. The ‘Tahs have struggled to maintain possession conceding 39 turnovers to date.

Defensively, both teams have been poor and have each given up eleven trys in their two games. At least the Waratahs have the excuse of having a new defence coach trying to instil new structures.

The Waratahs have beaten the Rebels in 15 of their 17 previous encounters. In their last four matches the Rebels have somehow managed to find a way to lose, despite being in a winning position.

Dave Wessels has an obvious preference for a big backrow and a 6/2 split on the bench. In the two opening rounds, he has selected a dual-blindside backrow that has not functioned well as a unit. This week he has opted for a more traditional approach with flankers, Michael Wells and Richard Hardwick joining Isi Naisarani.

In other changes, Ryan Louwrens has earned a start after his strong cameo against the Brumbies. Campbell Magnay comes into the midfield, pushing Reece Hodge out to the right wing and Andrew Kellaway to the pine. Cabous Eloff is in line to make his Super Rugby debut from the Rebels’ bench. The nineteen year old prop is a product of the Blue Bulls junior pathway and has looked impressive throughout the preseason.

No doubt the Rebels will look to attack the Waratahs through the middle channels. Against the Brumbies, the Rebels had plenty of possession but did little with it, they need to find a way to bring the outside backs into the game more often. Of course they will need to be much sharper with their defence and discipline, particularly in the first quarter.

“The Tahs have been a bit of our bogey team, they’re the one team that we haven’t consistently performed against so they always present a bit of a challenge for us.

But they’ve got a lot of new things happening there and potentially there’s some opportunities because of that,” Wessels said earlier this week.

Hoping for a more cohesive effort

Rob Penney has made several changes to the Warratahs starting side. In the forwards, Angus Bell earns his starting debut at Loosehead Prop and Jed Holloway returns to the backrow. Jack Maddocks and Cam Clark will start on the wings while Alex Newsome moves in to Outside Centre.

Penney is after a stronger defensive effort from the outside channels after both the Crusaders and Blues managed to exploit gaps out wide. The Waratah’s pack have been under immense pressure but have a better opportunity this week. As a unit they need to show some starch and step up to give their backline some front-foot ball.

Ruan Smith
Smith had his struggles in his first Rebels start last week, conceeding four scrum penalties. He came back well in the second half and ended up getting the better of James Slipper. Expect a much improved performance this round.

Ryan Louwrens
Louwrens made an instant impression when he took the field against the Brumbies, making a couple of decisive line-breaks and showing crisp passing skills.

Frank Lomani hasn’t really clicked in the halfback role so this is a great opportunity for Louwrens to take ownership of the No.9 jersey.

Campbell Magnay
After coming off the bench nine times in 2019, this will be Magnay’s first start for the Rebels. The promising Outside Centre will add some defensive starch to the Rebels’ midfield and his hard running may create space for the outside backs.

Angus Bell
The Junior Wallaby star gets his chance this week at Loosehead Prop. Bell is an athletic player that has already been earmarked for higher honours. He may have a tough time of it though, coming up against Ruan Smith looking to make amends for his last performance.

Jack Maddocks
This will be Maddock’s first return to the Stockade (along with Robbie Abel and Tetera Faulkner) after switching to the paler blue of the Waratahs. Maddocks reads the game of Rugby well and has a real knack for being in the right place at just the right time.

Alex Newsome
Rob Penney, looking for a better link between set piece and the outside backs, has selected Newsome in the hot-spot at Outside Center. He can expect plenty of traffic (I’m talking Eastern Freeway peak traffic, backed up past the Chandler) through his channel. Whether or not he is up to this challenge will have a big bearing on the outcome of this game.

A lot of people are probably writing this game off as a battle of the also-rans trying to avoid the dreaded wooden spoon. I don’t see it quite that way. I think both sides are capable of much better performances than we have seen from them so far and derbies are always worth a look.

The Reds and Sunwolves both have tough assignments this round. Hilariously, a bonus point win to either team could see them jump to 2nd place in the conference, within shouting distance of the Brumbies. The loser however will be left with a hard road to hoe from the bottom of the ladder.

Get to the Stockade early, there will also be a curtain raiser game from 4:35pm between the Rebels Women and Waratahs Women.

It’s a tough one to call, both sides have looked ordinary so far but should be quite evenly matched. The Rebels’ strong finish in their previous games has me somewhat optimistic but this week the Waratahs’ may have better impact from their bench.

All things considered, I’m tipping the Rebels to win at home by 8 points.