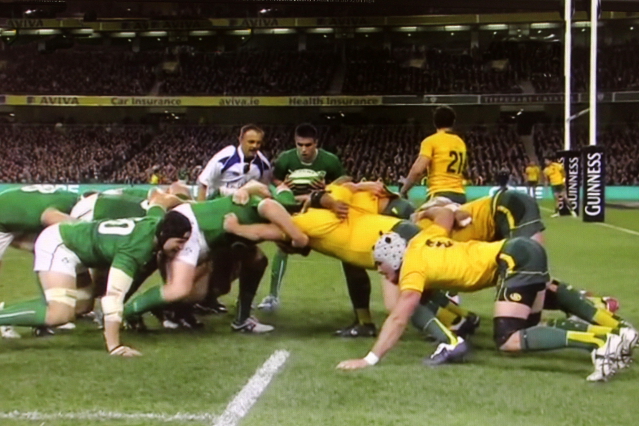 This Irishman always looks forward to seeing how we measure up against the Southern Hemisphere.  Here’s my take on this weekend’s game.

Ireland and Australia meet nearly a year to the day after a comprehensive win for Wallabies in last year’s corresponding fixture.

The fortunes for the two teams in the following twelve months could not be more different. Ireland have won the Six Nations, risen to third in the world rankings and lost only twice both by less than three points.

Australia on the other hand have seen off-field issues result in the resignation of a coach, a first loss to Argentina in The Rugby Championship and all the good work of the McKenzie era undone in a small number of weeks.

Ireland’s form in the November series has been excellent. They started with a shellacking of South Africa: their game plan carried out with ruthless efficiency and some clinical finishing, earning them a 29-15 victory. This was followed up with a 49-7 win, by a largely second- and third-string side, over Georgia on Sunday.

The Wallabies have played two full internationals on tour; they beat Wales 33-28 first up showing some good attacking work and composure to seal the win at the end.

On Saturday evening they were overpowered for 70 minutes by a French team in full flow but arguably should still have won the game. They look disjointed in defence at times and it seems that some of the non-Waratahs are struggling to adjust to the new game plan.

However, the Wallabies are starting to finish strongly: something that they couldn’t accomplish in The Rugby Championship.

Ireland will look to carry on where they left off against the Springboks: aggressive, disciplined defence, accurate ruck work and a clinical attack.

The plan against the Springboks was to force Pollard back inside with ball in hand and put pressure on the first receiver off the next phase. This resulted in Ireland turning the Boks over 19 times.

Ireland – disciplined defence against the Boks

They’ll need to alter this against Australia as the Wallabies have multiple options in the backline who are comfortable slotting in at first receiver and taking the ball to the line. I expect Ireland to employ a similar plan to the French with fast line speed and gang tackle the Wallabies behind the gain line.

Expect to see the choke tackle used sparingly as Ireland prefer to compete on the deck these days, but if Rob Simmons runs into contact it will be seen.

In attack Ireland will look to use the kicking games of Sexton and Murray to put up contestable kicks and to pin the Wallabies back in their own half. Also expect to see lots of inside balls from Sexton as a feature of Ireland’s play under Schmidt, as has been Rob Kearney and the wingers hitting the line at pace about three metres inside the out-half.

Ireland will also look to use their rolling maul a lot.  There hasn’t been any team that has effectively dealt with it over the last year and I don’t think that the Wallabies will be able to cope either.

Ireland – know how to maul and defend them too

Ireland didn’t offload once against South Africa, and I expect to see more of the same they will trust their ruck work to generate quick ball instead of throwing risky offloads. Ireland’s back line against the Springboks was the biggest that they’d ever picked so I suspect there will be a lot of traffic down Foley and Toomua’s channel on Saturday.

The Wallabies look a bit unsure in the wider channels in defence and it was interesting how often Wales were able to get outside of them; and France were also able to get some joy down the flanks as well.

Nathan Grey will be working hard to try and get his defensive plan working this week. Cheika will also need to come up with a plan to stop Ireland’s maul.

There is a case to be made for Skelton to make an appearance in this fixture as he is truly magnificent at turning ball over in mauls. Alternatively the Wallabies can take the option of not engaging and sacking the ball carrier at the back as Ireland did to the Boks.

Will Skelton – a case can be made to retain him

The third option against the lineout drive, which is the one I would go for, is to attack Ireland’s lineout on the throw. Rory Best is starting his first game in the series and is a notoriously flaky lineout thrower. If Rob Simmons can utilize his lineout prowess he’ll have gone a long way to stopping Ireland’s maul and stopping the Irish getting their attacking game going.

The Wallabies, and Tevita Kuridrani in particular, will be looking to exploit any uncertainty in the Irish centre partnership. With Jared Payne ruled out, Gordon D’Arcy and Rob Henshaw will have their first test start in the midfield together.

The Springboks managed to get a number of half breaks through this channel and with the likes of Folau, Ashley-Cooper and Hooper running dummy lines, a distributor with Foley’s class should be able to exploit these possibilities better than South Africa, and put Kuridrani away.

Tevita Kuridrani – could bother Ireland more than the Springboks did

Oddly enough for the Wallabies they may be going into the game with the stronger scrum, although both sets of reserve props aren’t great, Ireland’s scrum has been under pressure in the series and Slipper will be looking to test Mike Ross.

Cheika will want to use his playmakers at 10 and 12 to get the ball wide to try and get around the Irish defence which at times can be narrow.  Also they’ll look to keep the ball in hand as much as possible as Ireland’s back three are all excellent under the high ball.

McGrath v Kepu – this match-up could go a long way to deciding the game. Neither scrum has been in great form this November but if Kepu can hold off the strong scrummaging McGrath, who’ll have Rory Best back alongside him, it could give the Wallabies the stable attacking platform that they would love to use to launch the likes of Kuridrani, Speight and Folau.

If McGrath gets the nudge-on, Ireland will dominate possession and territory giving Sexton and Murray the kind of platform they will be able to put the Wallabies away with.

Ruddock, O’Mahony, Heaslip v Jones, Hooper, McCalman – I couldn’t single any of the backrow battles out so have decided to do this match up as a unit. Teams can win games without a strong set piece however you have to rule the breakdown if you are going to get the W.

Ireland’s backrow were superb against South Africa and Australia will need their trio to work as a unit to slow down Ireland ball and stop Ruddock and O’Mahony slowing down their ball. I also expect Ireland to target Hooper in midfield with Ruddock chopping low and O’Mahony looking for the steal. Australia should also plan to stop Heaslip, who was one of Ireland’s main carriers against the Springboks.

Wallabies  played well against Wales but Ireland owes them one

Bowe v Speight – This is set up to be a mouth-watering clash. Speight has proven his ability in Super Rugby and is now going head to head with one of the top wingers in the Northern Hemisphere.

Bowe is one of Ireland’s main try threats and is a classy finisher. Sexton will look to put up a few high balls on Speight early; so expect to see some aerial battles between the two. Speight will be looking to take advantage of Bowe’s defence, as he is liable to fall off tackles, especially against someone of Speight’s size.

Tommy Bowe – will be a threat

Ireland are twelve months further down the development line than Australia is. This is evident from their performances in the series so far. Ireland look well-drilled and confident whilst Australia look unsure of themselves and seem to be relying on moments of brilliance for points and territory.

Ireland will also feel that they owe the Aussies one after the beating they took last year. If these two sides meet in the World Cup the match could proceed in a different manner, but I feel that Ireland are just too settled and in too good a form for the Wallabies this time.

I’m backing Ireland to use their maul and the kicking game of their half backs for a win.