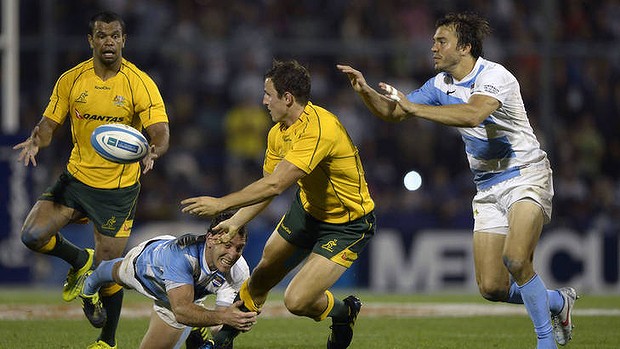 Being a Queenslander, where our curtains fade slower and our cows are at peace with the world, I failed to account for Daylight Savings time when working off an advertised 10am kickoff for this match – so I missed the first seven minutes.

Thus my caveat: if something earth-shattering happened in that time, I missed it. I certainly tuned in to see Higgers already on the field for Kane Douglas and immediately feared how we’d fare in a war of attrition against the passionate Los Pumas at home.

My fears were quickly allayed. That’s not to say the battle up front wasn’t tough (it was) and that the result was to be a lay down misère (it wasn’t). What I saw though was a committed Australian pack and a backline that was actually doing stuff.

Oversimplification? Maybe, but the feeling among many punters that the Wallabies were consistently failing to chance their arm was rife (and complemented beautifully by Hux’s article earlier this week). All of a sudden in Rosario, Phipps and Beale had plenty of options and had only to pick one – a far cry from the one-out play that characterised our most recent performances.

It was a good win given the circumstances (injuries, travel factor) and our second place in the Rugby Championship will probably see Deans through to the Lions tour, especially given the ever-shortening lead up we have to prepare. Nonetheless, there is still huge room for improvement and we’ll have a mountain to climb against the All Blacks at Suncorp in two weeks.