‘Working Class Rugger’ went along to Merrylands RSL Oval to watch another fantastic NRC Round 1 match. Here’s his report.

The NSW Country Eagles descended upon Merrylands RSL Oval to face the Greater Sydney Rams  looking to once again launch their NRC campaign on a warm, sunny Saturday afternoon in Parramatta. Both franchises met in the corresponding match last season leading to a comfortable Eagles victory by 31-3 in starkly different conditions.

For the Eagles, the goal would have been largely to repeat the prescription providing them with the ideal platform in which to build into what from early signs suggests will be an far more competitive and from a spectators perspective entertaining NRC Mk II.

On the other side of that equation, this week ends hosts having only by the slimmest of margins missed out finals football last season. Were no doubt looking to make amends for last season’s opening loss which ultimately lead to their promising run toward the middle of the last year’s edition falling agonisingly short. 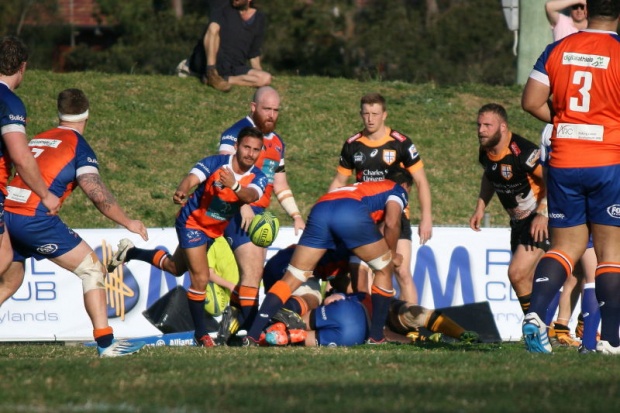 With near perfect conditions for running Rugby neither team chose the conservative route freely spreading the ball about setting a frenetic pace early that would dictate the shape this game would take for the majority of the afternoon. This was hardly surprising, considering both squads rosters were populated with plenty of young and up and coming talents fearlessly chasing their opportunity to make a name for themselves or enhance their already burgeoning reputations.

In the early exchanges, Country having the advantage of a more seamless transition from Club Rugby in terms of combinations looked fluid and threatening. While the Rams only having limited preparation due to a significant proportion of their squad being involved in finals football the weeks leading into the NRC, opted to push the pace and play into their perceived strengths.

The biggest question in the lead in for the Rams wasn’t their ability to keep pace with the potentially electric Country backline but if they could remain resolute in what would be a torrid and determined onslaught from the more fancied Country pack.

Any fears were quickly set aside as Jordan Heyer opened the scoring crashing over in the 5th minute signalling to everyone that there was far more mettle in these Rams and that if Country were to walk away victors , they would have to earn each and every point that afternoon.

This was a challenge Country were more than willing to accept and with great vision and execution in the 17th minute Country’s No.12 Dave Horwitz spotting an opportunity out wide dispatched the ball into the hands of a charging Andrew Kellaway from well within their own half. From there Kellaway showed exactly why he is rated so highly drawing the defence then slicing through before putting a blistering Joel Brooks on a straight line toward the goal. 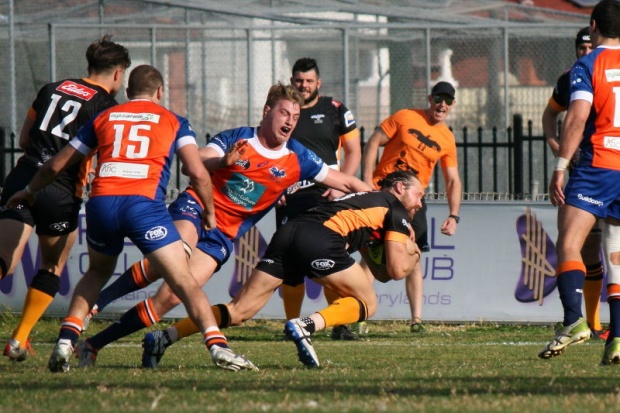 This was soon followed with Ed Stubbs making light work of a stretched Rams defensive line in the 27th minute  from 5 metres out after a sustained period of pressure that drew in and compressed the Rams forwards opening the door. While the Rams were making the Eagles earn it. Anyone on the sideline could have been right in fearing a potential landslide of points taking the game away. Fortunately, this wasn’t to be the case.

While the Rams may be lacking Super Rugby experience, they make up for it with a liberal helping of fight and just a dash of audacity. Their fight back was spurred on when Country No. 9 receiving a yellow card providing just enough opportunity for Cohen  Masson to sneak a try in the 29th minute. Not to be outshone, Paul Asquith put his Sevens skills and pace to good use not two minutes later streaking practically unhindered down the far touchline to score a wonderful individual try.

With five tries in the first 32 minutes and the game humming along at a fantastic pace it would have been totally understandable if the players just wanted to coast into half time. Fortunately, Andrew Kellaway nor anyone else on the pitch had any intent of doing. In the 35th minute after another good period of build up work by the entire Country team last season’s top try scorer, Kellaway, burst through the defensive line to open his 2015 account providing the Eagles with the lead going into half time. To add to the Rams woes, on the stroke of half time William Munro found himself earning an extra ten minutes after receiving a yellow card for his efforts.

Fortunately, the Rams escaped paying any further penalty for Munro’s indiscretion  and in fact came out of that period on top as Jed Gillespie barged his way over in the 46th minute to retake the lead and the ascending. Be it temporary.

After battling a well structured Eagles maul not 5m from the Rams try line. Cam Betham under somewhat controversial circumstances depending on your perspective. Infringed upon the Eagles maul earning himself a ten minute parlay.

This proved decisive and not two minutes later Will Miller found himself adding to the day mounting try tally scoring what ended up being the match winner in the 52nd minute despite 28 minutes still on the clock and the Rams not yet done with their scoring.

As above in the 59th minute, Bradford Kapa strode over to round out the days scoring.

After that, the heat began to take its toll and the pace slowed marginally but the slugfest that ensued didn’t disappoint. The last 20 minutes was a display of attacking potential on behalf of the Eagles and stoic defence by the Rams.

Jono Lance. More specifically his kicking. While he lead his team around the park skilfully it was his ability to convert their tries proved the difference. The Rams failed to convert there’s on three occasions leaving 9 points out on the field.