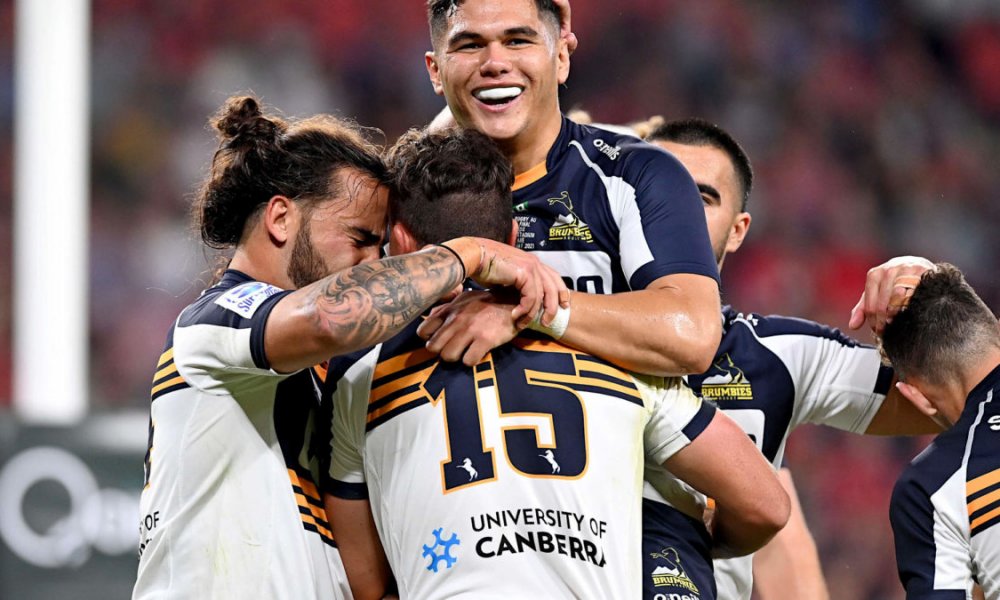 The Super Rugby Pacific semi-finals have been settled after this weekend’s quarter-finals. Big ups to all eight teams, and congratulations and commiserations to those involved. We’ll have a quick review of the matches, some interesting anecdotes on James O’Connor and a preview of the Pacific Four series.

Brumbies 35 v Hurricanes 25 – I’m unapologetically starting with the Ponies (despite the fact that I thought our goose was cooked mid-way through the first half… but not due to the red card). An inspirational comeback with a second half score of 20-3 over a quality Hurricanes side saw the Ponies run away with a 35-25 victory to head onto Auckland next weekend.

What was the turning point of this game? For me, it was not the red card to Ikitau (who may look to use a neglected camera angle in his defence this week though I still forecast the usual three weeks potentially mitigated to two with the high contact training) as this was effectively negated two minutes later with Franks’ piece of cheese (which was mere millimetres from being a red in itself). It was the introduction of the substitutions from both sides. I’ve said it earlier on this season that the ability of Dan McKellar to effectively rotate his starting side would mean the difference come crunch time. And boy, what a difference it made, especially in comparison to the Hurricanes who lost a lot of their experience at the 50th minute mark (TJ, Coles, Franks and Jordie to a HIA from which he returned). Whil the Canes definitely made the Brumbies pay for their (usual) ruck and maul infringements, finally something clicked in the Brumbies coaching staffs’ heads as they realised that Jordie would be kicking goals from 50m+ all match long. Interestingly, the Clown gave a really interesting piece of punditry regarding Nic White and Noah Lolesio. He stated that Nic controls the game and Noah is relegated to an ‘out the back’ player. For once, he’s not bloody wrong. Later in the game, when Lonergan was on, I noted with interest at how willing Noah was to be flatter.

In a bit of an anomaly, especially considering the conditions, there were only four scrums. Madness! As a referee colleague of mine said, ‘that’s not rugby!’ Hear farking hear.

Blues 35 v Highlanders 6- The Landers lost Aaron Smith in the lead-up to the match which put them well behind the eight ball before the game even started. While they maintained a competitive edge in the first half, it was all downhill in the second as the BBBB-led Blues let rip.

This wasn’t the most polished performance the Blues have delivered this season; however, finals footy is about the win. One point is enough. They led 14-6 after a largely error-riddled first half but gradually grew into dominant mode, eventually scoring five tries to none to put the foot on the throat of an average Highlanders side that finish the year with four wins from 15 attempts. Hardly good enough to be in the finals but that’s the system so be it.

The Highlanders, to be fair, were well in the fight of a scrappy contest until hooker Andrew Makalio was sent off in the 21st minute for a no arms shot on Blues lock Tom Robinson. In an act that had no mitigating factors as they player was always committing an illegal action, a red card was the only option for referee Gardner. What was disgusting was how Makalio carried on on his way off the field. What a turkey!

Crusaders 37 v Reds 15 – Well, this was an unfortunately predictable result. With many players out injured, Brad Thorn paid the price for not developing his squad throughout the season. This is no excuse, of course. With a scrum that went from world class to Wallaby 2007 in the space of a few weeks, it was impossible for Tate to get any quality ball. Consequently, his game suffered and thus the Crusaders snuffed out the Reds for 2022.

That said, the Crusaders didn’t have it all their own way. Apart from the scrum, the Reds were relatively competitive. Some excellent individual play from Sevu Reece and Richie Mo’unga, who, by showing their class, exposed the lack of top notch players in the Reds side. Some injuries to key players didn’t help either side.

I don’t quite understand some of the selections of Thorn (McReight on the bench as an example; others point to LSL who I don’t quite rate but is, admittedly, decent at Super level). This Australian way of thinking about ‘X factor players’ I think is a load of bollocks. Start your best 15 players! The Reds seem to have some average players like Connor Best who is not nearly ready to be a Super player either.

As much as I like Thorn’s no bullshit approach and very Musketeer ‘all for one, one for all’ philosophy, I do wonder if this is starting to wear thin in Queensland.

Chiefs 39 v Waratahs 15 – The amazing season for the Tarts ended in a quarter final loss to the resurgent Chiefs. While not the result many of us were, at least, hoping for, the positives greatly outdo the negatives for the Sky Blues.

The Chiefs proved to be far too strong for the Waratahs in this match as they secured a dominant 39-15 triumph in their Super Rugby Pacific quarter-final. They were impressive right from the start, kicking an early penalty through Bryn Gatland before Brad Weber went over. Although the visitors responded via Dylan Pietsch’s excellently taken try and Tane Edmed’s three pointer, the New Zealanders were 27-10 ahead at the break as Luke Jacobson and Alex Nankivell touched down. While a Will Harris effort gave the Tarts a sniff, the Chiefs finished strongly to win comprehensively in the end.

Waratahs – Well, even Hosstradamus couldn’t have picked the resurgence of the Tarts this season (though he’ll say he did!). Crikey, to even win a few games is a huge turnaround, let alone making the finals and finishing the season as the second-best Aussie team (😉😉). Big ups to Darren Coleman and his organisation for turning everything around. The challenge now is to improve on this season! They have some experienced players where they need them as well as a majority of their squad having been through two seasons of footy. Despite bowing out, they can all hold their heads up high. Having seen snippets of their culture, I reckon the Mad Monday will be farking epic!

Hurricanes – Will be regretting some key lapses through the season (and probably cursing Moana Pasifika for beating the Ponies last week!) and counting the cost of some key injuries. I think their forward pack needs a complete regeneration as they have an overreliance on players who are rapidly reaching the end of their careers (despite still being good players). They fell into the trap of having to continually use their best players to ensure they didn’t fall too far back which cost them at the business end of the season when relying on junior players.

Reds – Simply ran out of quality players and juice at the end of the season. Pride and passion can only get you so far. I think they’ll want to borrow the Brumbies pre-season playbook regarding handling skills as this is one crucial area where the Reds can improve. Sure they won games (predominantly early in the season.. in fact, they were the only Aussie side not to beat a Kiwi team… ouch!) but their handing, despite the Brisbane humidity which they ought to be used to, was often dreadful. No point at being set piece geniuses if you can’t hold the pill!

Highlanders – Farking fortunate that the format included a ridiculous eight teams in the finals. In any other competition, they’d not have come close. Similarly to the Reds, the Landers simply ran out of cattle and quality in the key positions. It’s always hard for the poor Highlanders, who are quite like the Rebels in that they have a sprinkling of good players and then are the leftovers of the other clubs and are expected to make a decent team out of nowhere. On their day they can beat anyone… but the Blues at home in Auckland was always going to be bloody hard. Like most other teams, some useful off-season acquisitions won’t go astray.

The Pacific Four kicks off tomorrow with the Wallaroos facing the Black Ferns in Tauranga live on Stan Sport at 1245pm AEST.

See the match schedule and referee appointments here Well done to Amber McLachlan on her appointments as well!

Coach Tregonning has made four changes to the starting side, headlined by the elevation of Trilleen Pomare as the Western Force playmaker starts at flyhalf. The 29 year old featured in the opening two games against Fijiana and Japan off the bench, which sees Waratah Arabella McKenzie join Smith on the bench. Along with this, there has been another complete front-row shift with Liz Patu, Adiana Talakai and Bridie O’Gorman selected to start.

See the starting side here

There has never been a more exciting period in the growth of women’s rugby and the upcoming World Rugby Pacific Four Series is the perfect competition for supporters to whet their appetite ahead of Rugby World Cup 2021 later in the year. After launching last year in the USA, the Pacific Four Series for 2022 will be held in New Zealand in June and will allow the hosts, Canada, Australia and the USA to play three high-level fixtures each. The four countries will then be back in New Zealand in October and November for the much-anticipated Rugby World Cup along with eight other top nations.

If you’ve been a fan of RugbyPass, you’d have come across a series of articles and clips about the oft turbulent career of James O’Connor. In honest, confronting yet occasionally humorous anecdotes, O’Connor goes deep into his career and his low points, including having two seizures while in France. Personally, I’m a huge fan of JOC 2.0. As one of the three amigos, he was a c**t. But gee whiz has he turned himself around. Good on him.

If you have some time, the interview is here on YouTube.

For those with RugbyPass – ARTICLE ONE ARTICLE TWO