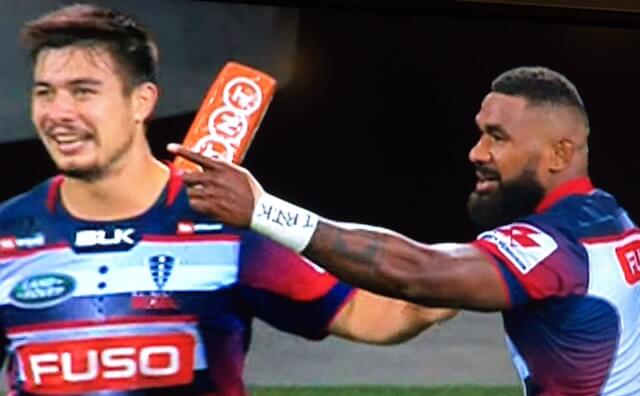 The unbeaten Crusaders trekked to Melbourne to take on the quite beaten (and bruised) Rebels at AAMI Park.

This is one game Melbourne Rebels fans have been dreading for some time. With more players injured than fit it would seem, coming up against an in form and unbeaten in 2017 Canterbury Crusaders it was more a question of how much will the Rebels lose by.

The Crusaders made 10 changes to their lineup, for rotation/resting as opposed to injury, with the notable inclusion of Israel Dagg returning after a long injury break. Meanwhile, the Rebels were lucky enough to welcome back a few from their injury list.

However, as has happened many times this season a late change was required to the starting team prior to kick-off with Lopeti Timani unavailable due to concussion picked up from a head knock during training on Thursday. Still, on paper the Rebels team didn’t look too shabby, considering.

Off the Rebels’ kick-off possession was mostly with the visitors with some to’ing and fro’ing with scores locked at nil-all until the 9th minute when Colby Fainga’a was pinged at the ruck. The Crusaders put first points on the board via a penalty kick to Richie Mo’unga.

The Crusaders would go on to lead for the rest of the match (oh, sorry, spoiler alert). It looked like the Rebels would be hit again with the injury curse in the 10th minute when Amanaki Mafi copped a stray boot to the head, leaving the field for a concussion test, being replaced by Hugh Sinclair.

Luckily Mafi was to return, but not until after the Crusaders dotted down their first of 6 tries. Sam Whitelock, forgetting he is a forward, made a sublime break, eventually setting up Manasa Mataele for the Crusaders’ first 5-pointer.

The Rebels needed 15 men on the pitch if they had any hope of keeping up, so it was not a welcome sight to see Reece Hodge sent off in the 25th minute for a deliberate knock-down. During his absence, the Crusaders scored two tries to Jed Brown (on early for an injured Pete Samu) and Seta Tamanivalu.

Interestingly, Jed Brown had never scored a Super Rugby try before and ended the night at AAMI Park with a double. The Rebels did manage to hit back during Hodge’s absence with a try to Marika Koroibete (his first of two), via a lineout win and beautiful around the back pass from Colby Fainga’a. Of course, the Crusaders would leave it at that prior to half time, with the visitors going over in the 36th minute with a try to Jed Brown, his second.

Interestingly, Jed Brown had never scored a Super Rugby try before and ended the night at AAMI Park with a double. The Rebels did manage to hit back during Hodge’s absence with a try to Marika Koroibete (his first of two), via a lineout win and beautiful around the back pass from Colby Fainga’a. Of course, the Crusaders would leave it at that prior to half time, with the visitors going over in the 36th minute with a try to Jed Brown, his second.

Going into the sheds at half-time, the visitors had an imposing 31-7 lead with the question being “how much worse can this get?”.

Jed Brown scores a double off the bench

I don’t know what they put in the Rebels’ orange at half-time, but the boys came out with a bit more fire in their bellies. Off the Crusaders kick-off, the Rebels slowly advanced up the field into Crusader territory, with Toby Smith putting a smile on all Prop’s faces when he scored a try just 2 minutes into the second 40.

One thing (of many) the Kiwi teams can do well is not panic and hit back with 5 points of their own just 4 minutes later with David Havili going over for the Crusaders’ fifth try of the night.

The Rebels were not done and kept fighting the good fight. At the 58th minute the Rebels scored possibly one of their best tries of the season when Sefa Naivalu, having a relatively quiet night, manages to fool the visitors, steal the ball less than 20 metres from the Rebels own try line and set up what would be a brilliant run from Mafi, who perfectly timed his pass to Koroibete to cross for his second meat pie of the night.

And again, the Crusaders spoil the party by scoring another try four minutes later with a try to Mitchell Drummond. The try would go unconverted, leaving the scores at 41-19 to the visitors for the remaining 14 minutes.

We couldn’t leave this game without a Rebels injury and in the 73rd minute, we got one, a big unfortunate one. Sean McMahon, in the action as always, went down clutching his arm in pain. Carrying your arm in your jersey is never a good sign and reports are it was a dislocated elbow or wrist (depending on who you talk to), with possibly a break in there too.  Scans will show more.

It seems very unlikely McMahon will play in the June test series now and if it is as bad as it looks, he may not play again for the Rebels this year. If the rumours of him going to Japan next year are true, we may have, sadly, seen the last of the Beast in Rebels colours.

While it was expected the Crusaders would win, many were prediction a cricket score, so to many losing by 22 points was seen as a kind of victory (if you can cal it that). The stats really tell the story, though. The Rebels missed 35 tackles, 24 in the first half. You just can’t do that and get away without points being scored against you, especially against a Kiwi powerhouse like the Crusaders.

Next round the Rebels travel to Canberra to take on Aussie conference leaders, the Brumbies while The Crusaders return home to face the Highlanders. Meanwhile, I will return to the foetal position for the remainder of the season…

Was there a game changer? It really was all the Crusaders way, especially in the first half. Reece Hodge being yellow-carded at the 25-minute mark didn’t help the Rebels’ cause and the Crusaders were able to put on 14 points during the ensuing 10 minutes.

For the visitors, you could possibly pick the whole team, but for steering his men expertly around the track and excellent kicking on and off the tee, Richie Mo’unga deserves the nod. For the losing team, Amanaki Mafi (again) shows why he is possibly the buy of the season, not just for the Rebels, but of all Super Rugby teams. He never gives up and is one of the few Rebels to keep the team on the go-forward.

Well, it looks like we can count out Sean McMahon after his unfortunate injury, which is a huge shame as he was coming back into form after a long layoff. Reece Hodge had a relatively quiet night (when not in the bin) and while he may not be ready for the June test series, Marika Koroibete showed tonight his transition from that other Rugby code has been coming along nicely with two superb tries to add to his collection.