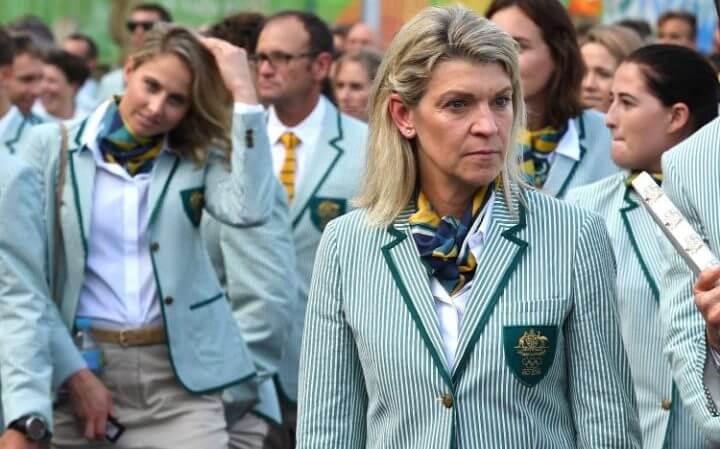 In response to last weekend’s record loss to the All Blacks, the ARU has taken immediate action and will bring in Rio Olympic’s Chef-de-mission, Kitty Chiller, into a newly created role the ARU hopes will go someway to improving the Wallabies chances of Bledisloe success in the future.

In what some are calling a knee jerk reaction, Chiller will head up the ARU’s new Under-Performance Unit (UPU) and will be tasked with managing under-performance at provincial and national level across both XV’s and the 7’s programme.

It appears a chance meeting between Chiller and ARU supremo, Bill Pulver, was a catalyst for the new role.

A source close to both Chiller and Pulver confirmed the details to Off-White Card exclusively.

“It really was coincidence. Bill was walking home from the 7s after the men had been tossed out and bumped into Kitty outside a Rio police station, where she’d had just bailed one of the swimmers. Although Kitty scolded Bill at first for walking the streets without an AOC sanctioned riot squad, the two sat down and had a bit of chat. It was a meeting of the minds.

“Anyone who’s watched Kitty manage the Olympic team’s under-performance over the last fortnight couldn’t help but be impressed; it’s just what the ARU were looking for.”

While the ARU High-Performance Unit will remain in place (cubicle 17-C), it will be cut back as it is now only managing the Pearls, with no other high performances on the horizon.

“Killer (Chiller) is going to be busy. She’ll meet up with the Wallabies in Wellington next week, but has already had some input into the new set up by organising counselling for those involved in Saturday’s test, including the families of the affected players. That’s the sort of decisive action we’re after and that’s why Killer’s got the gig.”

The newly announced UPU caps off a big week for the ARU after the successful implementation of the highly secretive ‘ARUSIO’.

“The surveillance stuff adds another string to our ever increasing bow. It’s cutting edge. It’s the future. It’s the ideas boom. Bill loves his tech and he was very much hands on with this one.” Explained the source.

“While I can’t go into much detail, we’ve got some really good juice on the All Blacks, insider stuff they wouldn’t want widely known. I mean, who’d have thought Shag Hansen liked watching Housewives of New York that he farts like a draft horse?”

While the ARU are remaining tight lipped about the existence of ARUSIO, they have confirmed Hansen’s rampant flatulence.