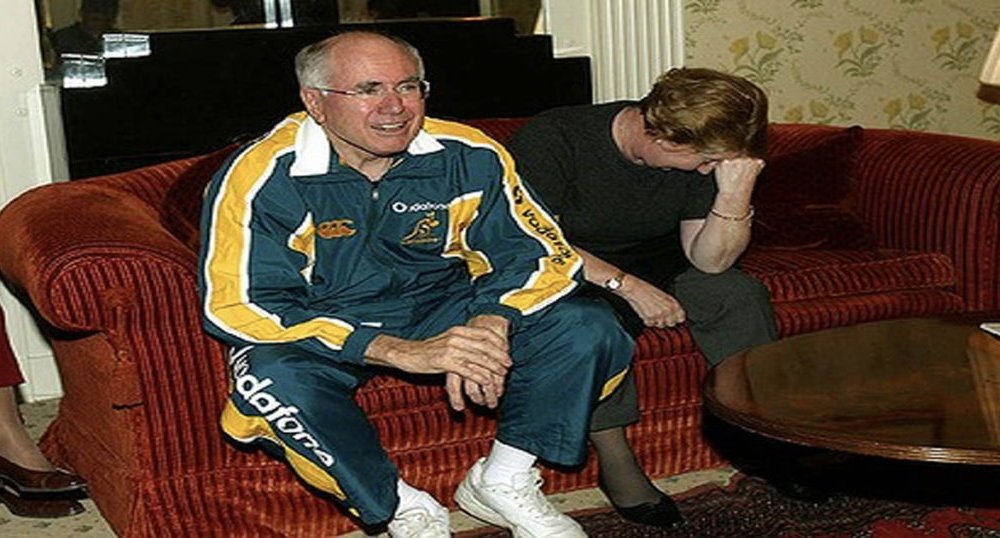 'Oh no, he's wearing it again'. Even our PM was Digging Gold back then!
Friday’s Rugby News.

My thanks to the G&GR work experience kid, Yowie, for bravely attempting to fill the void last week, he did his best.

Lots to discuss today starting up north with ‘The Hunt for Ren’s October’. Skip over the dutch to see how our Golden Girls are travelling in the RWC with ‘Staying Alive?’. Take a deep dive into the pit of despair that is Aussie rugby fandom and the brilliant doco ‘Gold Digger- The Search for Australian Rugby’ with ‘Fools’ Gold’. Visit a pet hate of mine in ‘Spit-Scared!’ and wrap it all up with ‘Friday’s Goss with Hoss’, somewhat miffed that it was snubbed in the documentary. I mean producers even spoke to some ‘Matt Rowley’ guy, whoever that is??

THE HUNT FOR REN’S OCTOBER.

The SH component of our internationals have fizzled out, yet again, so anxiously we cast our eyes northward and ponder The Hunt for Ren’s October.

Just what does ‘success’ look like when viewed purely as a five test tour?

With four of our five opponents currently sitting above us on World Rugby Rankings, what’s your version of success? Surely a win against Italy is a given ain’t it? But, to leave the NH again with ‘only’ the scalp of Italy would torpedo any last faint vestiges of hope for 2023 RWC, wouldn’t it? If we got either the scalp of France and/or Ireland plus one of Wales or Scotland that’d be a ‘pass mark’? Three from five? Should we dare dream of more? What if that three from five were instead The Caesar XV, The Haggis Eaters & The Northern Kiwis, would that still be a ‘pass’?

For me I’d take ‘option 1’ of the above. Like death, taxes & nurses, the Italians are a ‘sure thing’ and to take one off Les Frogs or Oirland would be huge and one must therefore demand an additional win over the Northern Kiwis or The Haggis Lovers as well.

I’ve banged on enough about Moses’ win rates and stuff, so let’s park that to one side and view this through the prism of a ‘mini World Cup’ only. Surely momentum must begin up north, if not……..

At time of publishing the squad wasn’t announced, should they release the details Friday I’ll update this article.

The Orange ones are set to face:

On to today’s class assignment Gaggers, what does ‘success’ up north look like to you lot? Someone hide the crayons off Yowie and ‘The Perkins Paste‘ off the two refs on here.

For 25 minutes last week us Rugby fans and our Wallaroos got an insight into what’s possible with more funding & support as our goddesses of gold stuck it to the beasts in black. The physicality, organisation, pace, unity, width & finishing of the Wallaroos for the opening salvos were simply first class and the scoreboard was an accurate reflection of what was unfolding on the field. It was electric and yes, I dared to dream of victory, sweet victory, but the professionalism and the ruthlessness of the Black Ferns really told out in the end.

Was a shame too, as I had a headline & story already mentally penned in for the Black Ferns with ‘The Chokes on You’. Having said that, will anyone beat England? You’d have to regrettably say that everyone is playing for silver in NZ. For the Wallaroos, the sums are simple: they must beat either of Scotland or Wales to go deeper in the tournament. If our girls can sustain that 25 minute burst for longer then I like their chances, like them a lot.

There are a number of good news stories around selection this week. Read more on rugby.com.au

So this week, having sat through the entirely absorbing rugby documentary, Gold Digger – The search for Australian Rugby, my question without notice to Matt Durant, producer, narrator and instigator of the show is thus: ‘Following on from Ben Darwin’s theories of ‘Team Work Index’ (TWI), which two Australian sides should be dropped and why are those the Reds & Brumbies?’

I have to thank one of our resident bed-wetting, guide dog owning (main KPIs to becoming a ref), Charlie McKay for this article. I must admit to somewhat of a sublime ignorance that this compelling doco even existed so like some Roman Pizzeria franchise owner, I sat, I saw, I pondered.

If you haven’t watched the documentary yet, I would urge you to track it down, sit back and ponder its offerings in full, before arriving at any conclusion.

The premise of the doco is essentially a first hand narrative from a jaded and frustrated (sounds familiar), yet proactive Wallaby fan in Hoss Matt Durant. Matt basically says ‘enough is enough’ and tries to uncover just why our Wallabies have essentially been in a 20 year hole and more while trying to understand how we arrived here and more poignantly, how do we climb out? Instead of channelling more anger into his existing anger, Matt essentially arrives at a point that he is so frustrated with his frustration, he does something about it and the entire ride is a cathartic release for both Matt & the viewer.

I found the documentary completely thought provoking and engaging. At no stage did I feel I was being ‘lectured to’ or taken down a path of a pre-determined outcome, but instead I was invited on the journey, almost as a silent witness and provided with interesting content supported by equally interesting data. Yet this content & data was balanced and contrasted with the equally insightful view from RA and former union identities about the ‘the commercial imperative‘ facing rugby in Australia.

Rarely has a piece of TV been so completely objective. It provided information, sought guidance, input and clarification from a variety of pundits & stakeholders, all the while without badgering you with a ‘view’ or ‘opinion’ of Matt . This viewer was left with questions to ponder and looking at the views of RA & Ben Darwin in particular. After deep contemplation and several enjoyable bourbons I arrived at the point where it wasn’t so much ‘which view is right’, but rather ‘how do these seemingly polar opposite views work in union’ (couldn’t help myself) to help strengthen our code?

You can (and really should) watch ‘Gold Digger – The search for Australian Rugby’ on Binge. Also you can read more about Ben Darwin’s Team Work Index at gainline.biz

Ok, I am gonna let you in on a pet hate of mine. I don’t understand it, it’s gaining in popularity, it’s gross and unsophisticated and no, it’s not Wednesday’s Rugby news, well not that alone anyway, it’s athletes and the growing proliferation and propensity for saliva projectiles: spitting.

Watching aforementioned Black Ferns v Wallaroos match last week and the amount of spitting I saw, literally made me cringe. Now before you get all ancy and tell me ‘women can do what men do’, this is not, or no longer at least, a gender related issue. And besides, I’m used to seeing the Black Ferns do what their male NZ counterparts perpetually do. You know, always being offside, being cynical with repeated and repeated and repeated infringements without consequence when under pressure in their 22, I wouldn’t call it ‘cheating’ as such, simply ‘playing outside the laws and spirit of the game to enjoy an unfair advantage from said outcomes‘, constant Jedi-like referee manipulation and cheating. But when I saw the incessant spit balls spewing forth from the female hobbits, I gotta tell ya, I’d had enough and got to thinking: what is it with athletes and spitting? Why the increase in ‘loogie launching’?

Is it physiological, scientific, due to the gender, hydration, a change to the molecular structure of saliva that makes it harder to swallow? What, pray tell, was the answer? But alas, Gaggers, no answer was forthcoming, it seems that the flinging of phlegm is more ‘societal‘ than science-related. More deliberate, then necessary and more gross than I can handle.

The whole thing makes me mad enough to spit.

Interesting read from Georgina Robinson in the SMH about possible corruption charges against Altrad. jersey sponsor for the Western Force and some little known Pacific Island battlers, New Zealand. Watch this space for potential knock-on impacts, I can’t imagine they’ll be positive!

According to reports, Mr Bernard ‘Spanners’ Foley looks set to tour at least some part of the NH tour with his Japanese club agreeing to some for of leave. Christy Doran of FUX Sports has more.

OK so this is G&GR and I haven’t paid too close attention to what ails the English comp, but for all the ‘cash’ and ‘financial strength’ that the Poms have held over and treated SH sides as half-wit cousins, it would appear the bodies are starting to surface. Wasps are the latest to appoint an administrator.

Also a salient point when you view Gold Digger and John O’Neill’s comments about what nearly killed SR down our way. Interesting parallels.

Game three of this terrific concept’s on this Saturday. Teams, times & coverage details courtesy rugby.com.au. Reading between the lines, some Oz A players have returned home already to be named in the touring NH squad. Jock Campbell and the Lonergan boys are expected to be among those.

All whispers would say ‘yes’ & welcome back Mr Hooper.