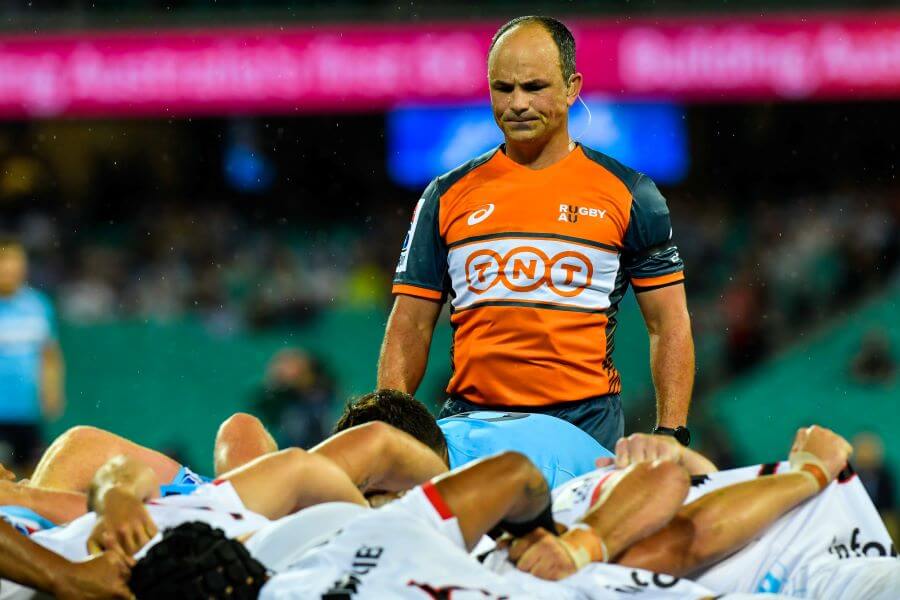 It’s getting to the business end of the season which means Wallaby squad selection is getting closer.  We all now the game is won and lost up front, so let’s see how the big lads are doing at the dark arts.

The Rebels hosted the Waratahs at Aami Stadium in Melbourne in a game that Darryl Gibson said he wouldn’t rest his Wallabies as he saw this as an internal trial for the Wallabies. Luckily he didn’t as the Waratahs came away with the win 20-15.

I noticed from the start how long it was taking the teams to reset the scrums as it has been commented to speed this area of the game up. I wasn’t an advocate for trying to fix this area of the game up as it’s important to get into the correct shape to prevent injury but after the 1st scrum, the referee pulled the scrums up for a reset. This took 40 seconds to repack. Then the next scrum was the same, 40 seconds. I’m sure if everyone’s in place it doesn’t take 40 seconds to set a scrum. This I believe needs to be improved in the scrums

Shortly after, the Waratahs scored an excellent first phase play from a scrum. The Waratahs had the feed in and Kepu ends up on the ground with his feet slipping out from underneath him but the referee allows the ball to be played. The Waratahs backline executed a neat backline move getting on the outside of the Rebels and scoring. This is what you love to see in the scrum when you stick your head up.

At the 25 minute mark there was a well contested scrum from both teams. What I noticed was when the packs engage upon the set call, the instability across the pack was evident with wave after wave of bodies rolling trying to get into shape. This isn’t the shape of an 8 working together but it was clear on both sides trying to get one over the top of their opposite numbers. Kepu does an excellent job of holding off Faulkners attack but Robertson on the loosehead side gets the first bite on Ainsley pushing through and around him. Faulkner then gets some give on Kepu and comes around the corner in the same manner but Robertson had already gone through with Ainsley body aiming inwards of the scrum and getting penalised for angling in.

The majority of the scrums throughout this game ended with front rower’s feet slipping out from underneath him and this takes away from seeing who was more dominant throughout the game. I really enjoyed the energy when both of the Talakai brothers came on and don’t think I’ve seen that kind of intensity from the reserve Waratahs prop, Chris Talakai. Sam Talakai added an extra element to the scrum for the Rebels also. At the 57 minute mark there was an excellent engagement by the Waratahs who surged forward as the ball was fed in but then Talakai and the Rebels return fire with a second surge showing the power he brings to the scrum. And at the 62 mark Talakai and Faulkner had an excellent scrum over the Waratahs and it was clear Kepu was getting tired and was time to be replaced.

Some observations from the game start with Rangi giving away a silly penalty, knocking the ball out of Beales hands. Not needed when they are exiting out of their 22 and you have given them a free pass. There was 5 points in this game and these minor lapses add up at the end of the day. The Rebels lineout option to drive mid field was excellent and laid the foundation for the backline to score off. This maul stretched out like a train as opposed to a mass of bodies and the Rebels took advantage of the retreating Waratahs with Quade Cooper scoring. Fitzpatrick must be reading the article as he’s starting to throw nice little inside tip balls to good effect as well as a number of options at the back of the lineout which offer some variety in attack. Harry Johnson-Holmes had some good involvements with an immediate turnover and a big tackle on Naisarini with Miller straight on top giving the Waratahs another turnover. All the little things adding up for the Waratahs to get them home.

Biggest battle had to be the scrum at the 25 minute mark with waves of movement and the scrum spinning around making it hard to decide which team was more dominant or going forward but the referee declared Ainsely angled in and was penalised.

The Brumbies travelled to Tokyo to play the Sunwolves at Prince Chichibu Memorial Stadium in Tokyo coming away with the win 42 to 19. The Sunwolves starting front row of Alex Woonton, Nathan Vella and Takuma Asahara. The Brumbies starting with James Slipper, Folau Fainga’a and Alan Alaalatoa.

The Brumbies scrum was strong throughout this game but I did notice at times that the pack looked quiet loose upon set up with waves of contact being made upon the set call which is very unusual for the Brumbies but it didn’t seem to effect the resulting scrums. The Brumbies won only 3 scrums to the Sunwolves 4 but with the Sunwolves conceding 4 penalties for collapsing handing the ball to the Brumbies to opt for a kick to touch and to refine their driving maul.

A scrum of note was around the 65 minute mark when the Brumbies held up the Sunwolves over the try line resulting in a defensive 5 metre scrum. The Brumbies drive through the Sunwolves but notice Sio losing his bind with his knees hitting the ground. Fighting to get his bind back up and drives through the scrum. With the referee right on the spot his was lucky not to get penalised for dropping his bind and or knee on ground but worked hard with a resulting penalty and exit out of the red zone.

I feel Fainga’a had a relatively quiet game with 2 throws not straight which is a concern when the throws aren’t being contested. I have been a big advocate for Fainga’a as the best hooker in the country on form but thought he was well below his best in this game. I love the fact that Connal McInerney steps up and scores a hat trick in place of Fainga’a which could have done wonders for his leading try scorer tag. McInerenys throwing was on target and I did notice him around the ground with 7 tackles and 4 runs throughout his 40 minutes. I do raise the question when teams are up by a good margin why the reserves don’t get more game time? Sio was on for 30 minutes but Les Leulua’iali’i-Makin only played for 13 minutes. I would think this is a great opportunity to give the bench some game time.

The 27 minute shows a dominant Brumbies pack get a strong engagement at the set call and drive straight through the Sunwolves pack. Slipper gets an excellent long bind but gets into an akward shape as his bind slips under Asahara but the drive through the back 5 is enough to continue forward momentum with the Sunwolves being dismantled and trying to defend as if a rolling maul.

The Reds hosted the Jaguares at Suncorp Stadium in Brisbane who were in fine form and continued their Australian winning streak winning 34 to 23. The Reds starting front row of JP Smith, Brandon Paenga-Amosa and Taniela Tupou with the Jaguares starting side of Nahuel Tetaz Chaparro, Agustin Creevy and Lucio Sordoni.

The 1st 50 minutes of this game was a very good performance in the scrum from the Reds with excellent body positions and control. A scrum at the 5 minute mark with a feed in to the Jags had JP Smith drive through Sordoni, getting a good push around to have the Jags halfback Felipe Ezcurra under pressure. With the scrum wheeling around Angus Scott-Young gets up fast to apply pressure and Ezcurra passes the ball into touch.  A good result for the Reds due to pressure applied in the scrum.

A great try to Chris Feauai-Sautia resulted from another good Reds scrum that was collapsed by the Jags and given advantage by the referee. Scott Higginbotham who was playing his 100th game held the ball in long enough for Tate McDermott to start moving wide with Higginbotham flicking under his legs to allow McDermott to hit a wide channel stepping through a number of Jags defenders. The ball came back with Kerevi punching through a hole and offloading to Feauai-Sautia. It’s great to see a try resulting from the forwards set piece.

The Jaguares did hit back in the scrums in the last 20 minutes of the game making a mess of the Reds. One example was with Mayco Vivas driving straight through Ruan Smith and dismantling the Reds scrum to earn a penalty and ongoing momentum towards the closing stages of the game.

Taniela Tupou had a positive game from the outset putting a big shot on his opposition prop Chaparro. Tupou was also busy throughout the game with a turnover and a solid run off the back of a lineout that had him crashing into the Jags defence but it was the kick down the touch line for JP Smith that was the highlight for me. I don’t think Tupou realised it was Smith on his outside but it was like watching a turtle in quicksand chase that ball and what could have been if the play was pulled off.

Brandon Paenga Amosa also had an opportunity to show his capabilities getting a start ahead of Alex Mafi but I don’t think he stood up in this game with only 2 runs and 5 tackles from his 43 minutes on the field which was disappointing. If I was looking for a positive to BPA’s game it was the Reds intent to push the speed of the game at the lineout and he was on the spot every time with ball ready to go. This worked well for the Reds and contributed to their 19 lineout wins.

The outstanding scrum of the game was in the 44th minute where you can see the Reds drive through the Jags but even though Tupou stands up (a penalty against the Reds) Smith on the loosehead side continues to drive through his opposite. JP Smith had a good night in the scrum and was going forward most of the night.

Its not every day that a front rower scores a hat trick so Props to Connal McInerney for bagging 3 tries against the Sunwolves at the rear of the Maul.