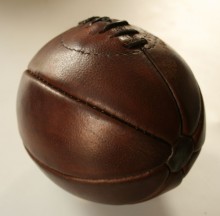 The famous Kurtley Beale ‘Falcon’, when he headed the ball during the Wallabies Tri-Nations win in Bloem, left him momentarily stunned.

If you went back 50 years, perhaps to the days of the XK Ford Falcon and tried this stunt it may have knocked you out because the ball was a completely different beast.

You would more than likely be hit with a four, six or eight panelled leather ball weighing around 14 or 15 ounces, the difference being that it had none of the flexibility or dexterity of a modern ball – it was far more solid.

The ball would have been a lot heaver as well if it had been raining no matter how much dubbin (waterproofing wax) you’d put on it.

The leather pill was laced up and had a rubber bladder. The valve was part of the bladder and you stuffed it back under the laces when you’d finished pumping it up.

The shape and size of the bladder determined the structure of the ball. The leather panels were hand stitched together. It was very slippery animal when wet or dewy.

Today, we use a Gilbert synergie ball for international matches. It’s got ‘Multi-Matrix 3D Grip’ which is a covering of star shaped pimples that allow maximum gripping. The pimple patterns are aerodynamically designed to prevent drag.

The synergie ball is made of a synthetic laminate compound with a performance rubber surface and is lighter than the leather variety. The valve is placed in the seam to ensure that the ball won’t deviate from the line of kick.

The ball is pre-kicked by a kicking machine to remove residual stress. Wow. Haven’t times changed?

But where did it all start? In Rugby of course! The town and the school during the 1820’s. The real Gilbert (William Gilbert 1799-1877) was a boot and shoe maker to Rugby School, operating from 19, High Street.

Gilbert and Richard Lindon were the main suppliers of rugby balls and boots to the boys and masters.

When William Webb Ellis picked the ball up and ran with it, the ball was larger and rounder than today. There was no fixed shape or size as this really depended on the pig’s bladder used.

There is evidence that the ball started to change shape in the 1830’s, sort of like a plum but it wasn’t until the 1870’s that it developed its more distinctive oval shape to improve handling and passing.

That’s when the game became more structured and organised with the formation of the Rugby Football Union (1871), and reduced from 20 a side to 15.

He also invented a hand pump for balls as previously you’d have to physically blow up the smelly bladder using a clay pipe.

When William Gilbert died in 1877, his nephew James succeeded him and Gilbert’s at that time were stitching 2,800 balls a year.

In 1892 the Rugby Football Union introduced rules for the dimensions of the ball:

James Gilbert was succeeded by his son James in 1906. He died in 1917 during the War and the 4th generation James took over. This Gilbert was a perfectionist and the business grew. He checked and stamped every match ball personally to make sure it was of the highest quality.

By now, each nation had its own preferences with Australia and New Zealand favouring the pointed (torpedo) shape and South Africa the 8-panel which offered better grip.

In Britain, Ireland and France most balls were now of 4-panel construction but 6 panels were still in use. Player pressure resulted in the balls being reduced in size by one inch by Gilbert, which subsequently lead to a change in rules in 1932.

In 1946 Gilbert formed a formed a joint venture with the Glasgow based soccer ball brand Tomlinsons who were responsible for much of the distribution and marketing of the brand until the 1970’s.

The Gilbert ‘Match’ remained the ball of choice for the majority of major matches during this time.

With the advent of new materials and brands challenging Gilbert’s traditional leather business, the company experienced difficult times and the family decided to sell the business in 1978.

Gilbert passed through the control of three different owners through the 80’s and 90’s. During this time, the brand embraced and perfected the use of synthetic technologies in its new Barbarian ball and expanded into wider areas of rugby equipment, footwear and clothing. 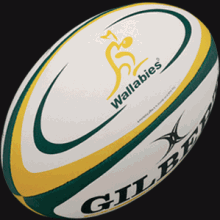 Their ball was adopted as the ball for the 1995 and 1999 World Cups. However, financial difficulties in 2002 led to the acquisition by Grays and by quirk of fate the brand returned to its birthplace at 19, High Street in Rugby, where Gray’s operated a sports shop.

Grays were producing rugby balls for Cambridge University after they took up the game in 1839 so history was maintained with a bit of tradition.

The Rugby World Cup in Australia in 2003 introduced Gilbert’s Xact match ball. This technology was enhanced further with the patented star-shaped grip pattern, the first ever departure from round pimples and the 2007 edition (now called synergie) was used at the RWC in France.

Gilbert have been making balls since the game was first invented and have now supplied balls for four successive World Cups and the next two 2011 and 2015.

We’ve done the history of the scrum-cap (headgear), now the ball – perhaps next time we could go the jock strap?

Did you know the first jockstrap was used in 1874 by the Boston Athletic Club to control the male genitalia (using a rubberized canvas girdle) whilst riding a bicycle?

(Thanks to Gilbert Rugby, RugbyFootballHistory.com, Rugby Museum, IRB and of course where would we be without Wiki?) 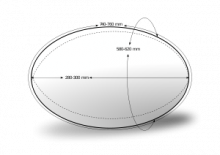