Brisbane win a nail-biter over Canberra 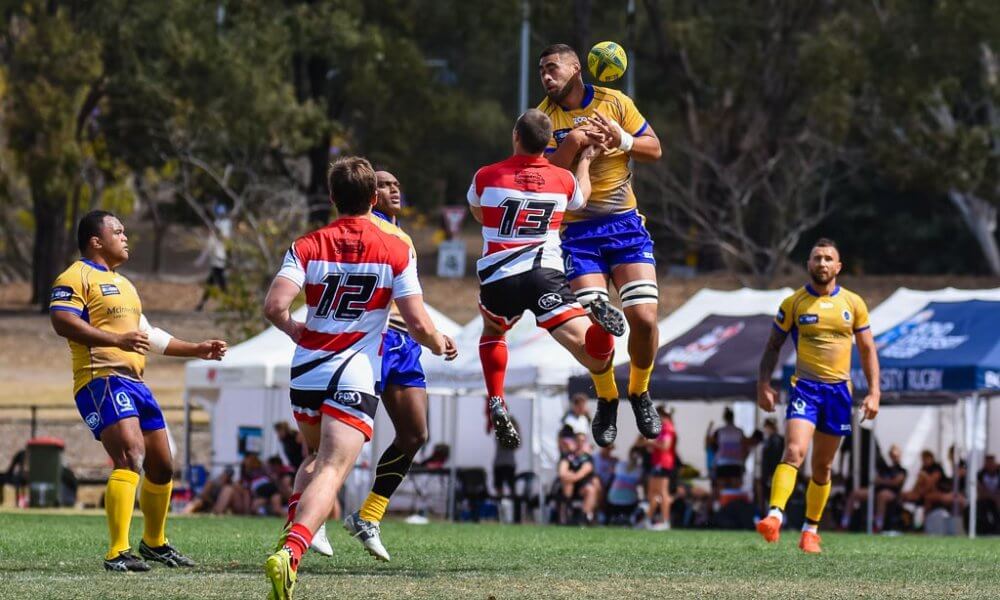 Brisbane win a nail-biter over Canberra

The Canberra Vikings arrived in Brisbane ready to extend their undefeated season into the third round.  The hosts, Brisbane City, were just looking to show their fans that their last round thrashing to QLD Country was not cause for concern.  In a fantastic day for rugby in Brisbane, the University of Queensland was pumping as a massive three days of rugby drew to a close. Could the home team replicate the success of the U of Q women’s 7s team who earlier won the third leg of the AON Uni 7s?

The match didn’t start well for Brisbane as the Canberra team executed a perfect lineout and some pretty basic backline hands to find a simple overlap for winger Ben Johnston to score in the corner.  The home team was able to even things up soon enough when Wallaby squad member Lukhan Tui muscled over for a try. It was due reward for Tui who was busy with the ball early on.

While the two early tries were fairly traditional rugby tries the third of the match, to Brisbane inside centre AJ Alatimu, was a little out of the blue. Alatimu took advantage of a cunning Pat Morrey clean out to the side of the ruck by picking and going from about 30m out and sprinting away to score a try.

It was around this time, approximately 20 minutes into the match, that Quade Cooper began to feel his way into the match. It was his influence that saw the Viking defence allow space for young Brisbane winger Dylan Riley to race away down the sideline before finding scrumhalf Moses Sorovi in support.  Brisbane couldn’t finish that movement, but kept the pressure on the Canberra team and drew a penalty close to the line from which Sororvi took the quick tap and passed off to the big loose head prop, Tonga Ma’afu to power over for a try. 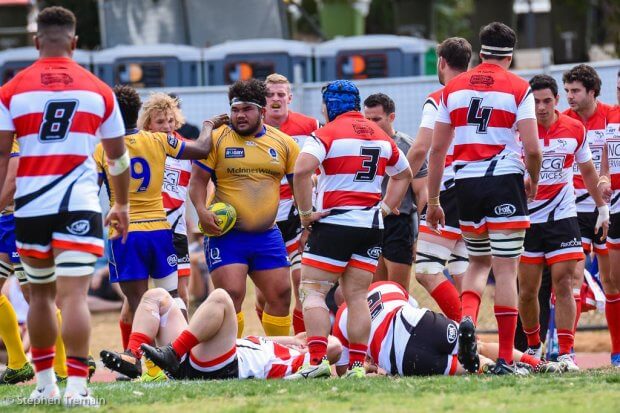 But Canberra wasn’t out of it by any means and it was their turn to score a try against the run of play. Brisbane failed to chase a Sorovi kick down field and Vikings centre, Andrew Robinson, pounced on the ball and found space straight up the middle of the field. He linked with the towering young lock Darcy Swain, who found Robbie Abel in support before James Dargaville finished off the play with a try.

It was another member of the Vikings tight five, this time tight head prop Les Leuluailii-Makin, who was integral to a Canberra try. Makin charged onto a well-timed Tom Banks pass to find unfamiliar space. He maintained his composure and was able to draw the last line and pass back to Banks to score under the posts and even things up with just five minutes to go in the half.

Things got a little more traditional soon after when Brisbane Number 8, Michael Richards, benefited from a series of dominant scrums on the Canberra scrum and scored what was basically a pushover try in the shadow of half time. With both kickers, Cooper and Wharenui Hawera, having exception days with the boot the teams went to oranges with the hosts holding on to a 28-21 lead.

It was more of the same in the second half when Banks was over for his second to again even scores up. The former UQ player was right at home when he ran onto a lovely Abel inside ball to race away from his own half and score untouched. 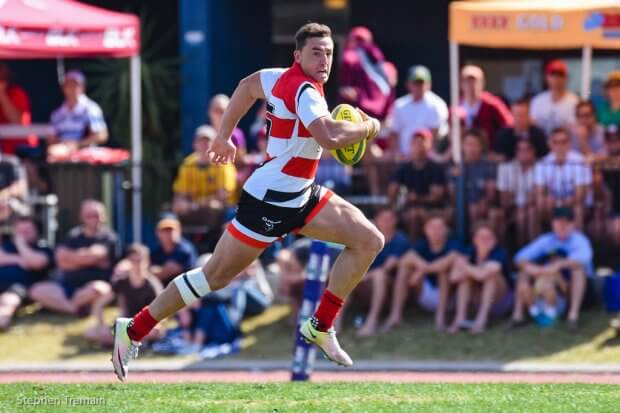 AJ Alatimu then matched Banks by crossing for his second of the match although this try had a few more other players involved. Cooper spotted space wide in his own 22m and threw a wonderful wide pass for Alatimu to find a gap. The GPS centre quickly distributed further to his winger Ed Fiddow and should incredible speed up the sideline and looked in for all money, only to pop the pass back to Alatimu on the inside to cross the line.

Canberra would not be swayed though and such brilliance could not distract them from their own game plan. Working the blindside through Sam Carter, Hawera and Andy Muirhead that again found an overlap before Muirhead passed back inside to scrumhalf Joe Powell to score. It was a clinical try but led to one of the moments of the match. Flyhalf Hawera missed his first kick off the day, and the only conversion of the match to go wide. It provided breathing space to Brisbane and mounted the tiniest bit of extra pressure on the Vikings.

It was then Brisbane’s turn to go conservative, and showing off the dominance of their set piece in the process. After drawing a scrum penalty, Quade kicked for the corner and driving maul

from the lineout was inevitable. It was captain, and hooker, Andrew Ready that would be the beneficiary – a fitting reward for his work in both the scrum and lineout.

Canberra had their chance to return serve almost immediately when they set up for a lineout 5m out from the Brisbane line.  Brisbane, however, defended it brilliantly with Kane Douglas first defusing the drive and then turning over the ball. It seemed that the Vikings would pay the ultimate price with Quade again finding Fiddow and space out wide. The Samoan 7s representative showed blistering pace to race away before Banks put on a great tackle to stop him.

With Brisbane holding onto a nine-point win, the Vikings applied the blow torch and constantly pressured the Brisbane line for about five minutes. They draw a Yellow Card against Douglas for repeated infringements at the lineout. The reward would come when Dargaville scored his second for the game after some nice link play by replacement prop Joel Pender and Muirhead.  Replacement scrumhalf maintained the high kicking standards by potting it from the sideline and the deficit was two points with less than a minute to play. 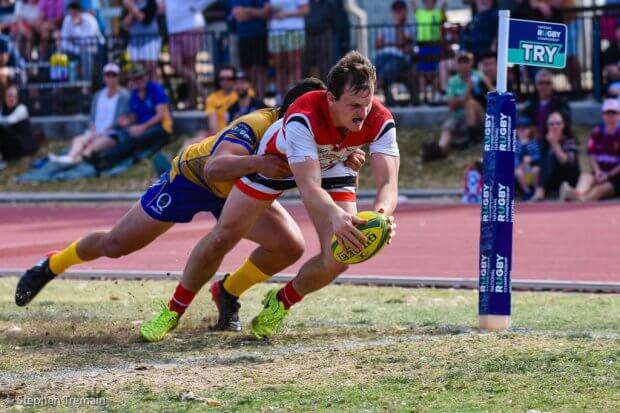 An excellent Cooper kick and chase by the impressive Chris Kuridrani drew a penalty when Dargaville was ruled to have deliberately knocked a pass down. It was enough for Quade to put the ball into touch and the Slickers to celebrate an important victory in what is proving to be an extremely tight 2017 NRC.

There was never much separating these two sides and with the quality of goal kicking so high, it’s unfair to single out one kick. But in the end, it was Hawera’s miss of the Powell try that saw Brisbane draw away.

Lukhan Tui’s workload was fantastic and he did some wonderful things in defence and attack, but in the end, it was the skill and composure of Quade Cooper that was the biggest factor in Brisbane getting home.

Tonga Ma’afu did a great job in the scrum up against the Super Rugby experience of Les Makin, while the ‘rookie’ backrowers of Morrey and Richards were also impressive. Further out Alatimu proved an excellent foil to Quade’s brilliance. For the Vikings, young lock Swain is definitely one to watch.

All photos courtesy of Stephen Tremain