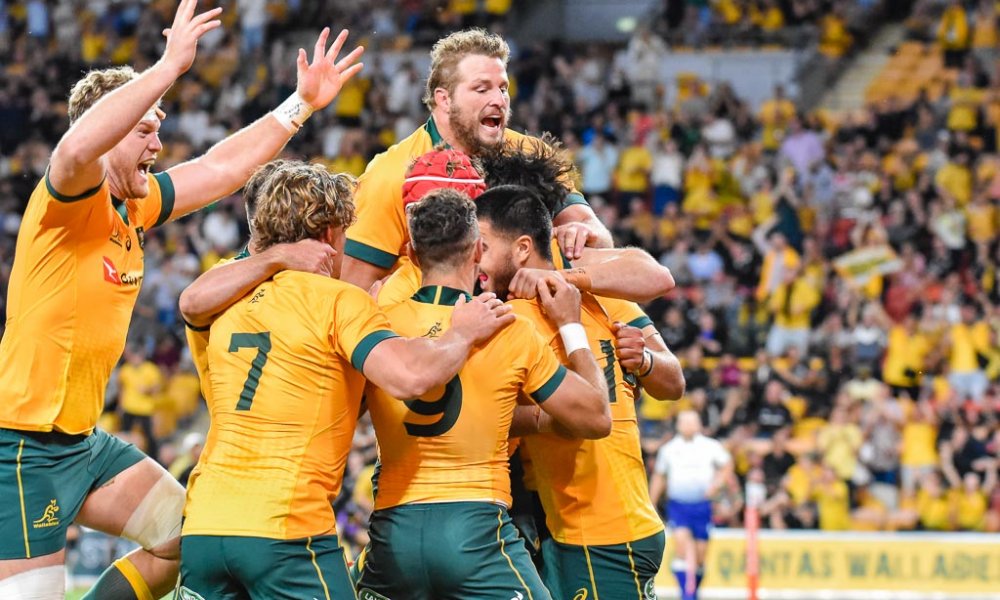 With last week’s capitulation still ringing in our ears and sullying our minds, the Wallabies return to Fortress Suncorp for the fourth Bledisloe and second game of the Tri-Nations campaign. With the changes having been made by Dave Rennie and Ian Foster in both teams, will we see a different result to last week? 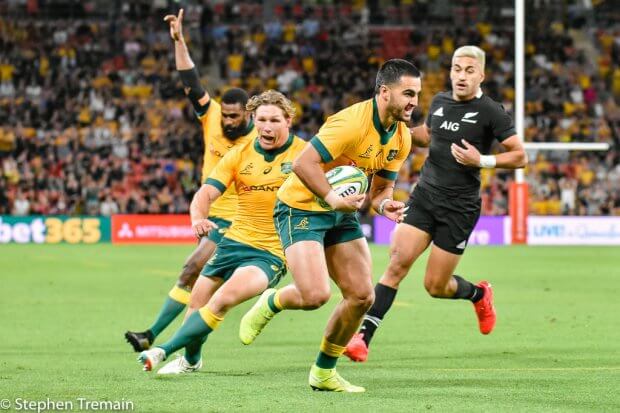 James Slipper led the Wallabies onto the park in his 100th Test to a large roar from his former home town crowd, and after the anthems and the Haka we are away.

An early penalty to the Wallabies after showing some real intent with the advantage, led to an attacking lineout which immediately paid dividends. The win saw the ball out to Reece Hodge who chipped across field and after a neat pass out of the back of the hand Tom Wright went over with his first touch in Test rugby. 5-0 through three minutes after the missed conversion.

As always, the All Blacks were nearly sure to hit back and in the eighth minute they did just that. Sustained pressure and movement across the field caused compression and after nearly scoring on the right, the try came on the left to Rieko Ioane from a deflection by Wright of a Laumape pass. Not many team could defend 29 phases and this was no exception. 5 all after the missed conversion.

Despite not having much possession through the first fifteen minutes the Wallabies were looking to attack from all places and trying to use the ball to pressure New Zealand. Another neat set piece from a lineout sent Koroibete through a hole and Sevu Reece conceded the panicked penalty, which Reece Hodge made no mistake. 8-5 Australia after 20 minutes.

After 22 minutes Tom Wright’s fifth touch changed the tone of the game. A bustling run led to a ferocious hit by Ofa Tuungafaasi which caught him high. Referee Nic “Rasp” Berry eventually opted for the Red card and the All Blacks are down to 14.

Despite the man advantage, Australia couldn’t capitalise, and a Jordie Barrett penalty levelled the scores with eight minutes until halftime. Soon after Australia very kindly evened the numbers with Lachie Swinton making a terrible no arms tackle on Sam Whitelock. The inevitable red meant it would be 46 minutes with 14 a side.

Australia continued it’s march towards rugby league numbers when Marika Koroibete fell victim to being the fifth Australian penalised in succession, allegedly for failing to remain on feet. At the same time  James Slipper came off with what looked like a severe arm/shoulder injury, leading to a debut for Angus Bell. A misfired All Blacks lineout close to the line took us to half time with the scores locked up at 8 all.

The second half started with Australia looking to soak time up with Koroibete still off the field. With little possession they still managed to take the lead with five phases leading to a penalty which Hodge knocked over for an 11-8 lead just as Koroibete returned.

Immediately there was a response, with a Reece break down the right  ended by Koriobete right near the line, but from the ensuing lineout, a driving maul was perfectly executed and Codie Taylor scored. The conversion was good and it was 15-11 to New Zealand after 52.

Taniela Tupou replaced Allan Alaalatoa and immediately monstered the scrum, drawing a penalty even with Australia packing one less. Hodge put the kick over and it is 15-14 into the last quarter.

With 13 minutes to go the Wallabies had the chance to nail the win. Scott Barrett was pinged for a blatant professional foul and earnt a yellow for his trouble after 67 minutes. Another uncharacteristic All Black penalty right in front gave Hodge another easy three and it is 17-15 with eleven minutes to go.

The Wallabies took full advantage this time with some concerted possession and attack, continuing to pressure the line, and eventually it told with Taniela Tupou burrowing over from close range. The conversion was good and it was 24-15 with four minutes to go.

The last few minutes were nail biting and with 90 seconds left Tupou Vaa’i went over and Barrett converted. 24-22 with less than a minute left.  The game was sealed with 25 seconds left with two big tackles from Marika Koroibete, the second causing a knock on by Jordie Barrett. The scrum was won and the game was sealed.

It wasn’t the prettiest game but the sheer fight from the team to fight back mentally from last weeks humiliation can’t be overlooked. Well done Wallabies. 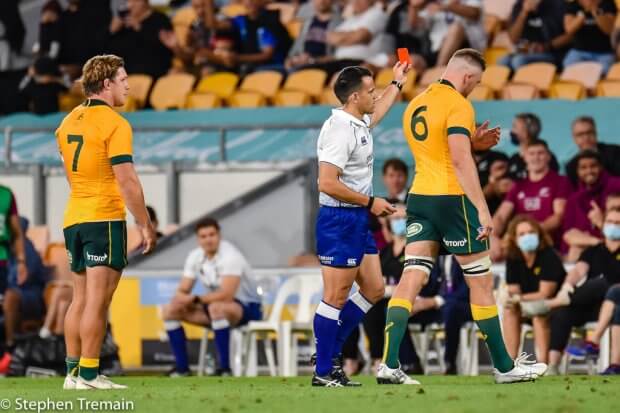 One would have thought there would be some hope for the Wallabies but they failed to make inroads in the time they had the advantage. Then after Swinton’s red they lost the plot with a string of penalties prior to half time.

The second half was more measured but you always had the sense that New Zealand had enough in reserve to see it out, but uncharacteristic ill discipline told eventually. Six straight penalties and a silly yellow sealed their fate.

Marika Koroibete was his usual feast or famine self, making a few errors and being harshly yellow carded but his good outweighed the bad tonight. His effort in chasing, running until the last minute, earning penalties and causing a knock on to end the game.